Is Rudy’s the best barbecue joint in Houston? 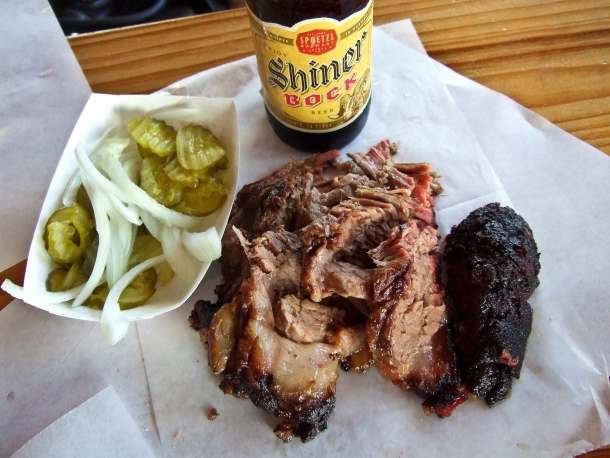 I’d heard whispers. “You gotta check out Rudy’s,” they’d say, “the barbecue is fantastic!” “Rudy’s? You mean that chain restaurant called Rudy’s Country Store and Bar-B-Q with the kitschy building and the gas pumps in front?” Yes, that Rudy’s.

I’d passed the Rudy’s on Highway 290 many times, often on the way to eat “real” barbecue in the Central Texas meccas of Lockhart, Taylor and Lexington. It’s a sad fact that I drive to Austin and surrounding areas to eat barbecue more often than I eat barbecue in my hometown of Houston.

Frankly, finding good barbecue in Houston can be exasperating. What passes for most East Texas-style barbecue in Houston these days isn’t really barbecue; it’s roast beef or roast pork drenched in a sweet tomato sauce. To me that’s not barbecue. How do I define barbecue? First and foremost, it’s the application of smoke to meat. The technique of applying hot smoke to meat both cooks and tenderizes the meat and adds the distinctive flavor that we all know and describe as barbecue.

The East Texas-style of barbecue, generally, is derived from a Southern-style known mostly for pork rather than beef. Some suggest the flavor of East Texas barbecue is defined by the sauce rather than strongly smoked meat, but that’s debatable and certainly antithetical to our definition of barbecue. Legendary Houston pitmasters like Roy Burns, Sr., and Willie Williams were dedicated smoke men — smoked meat always took precedence over the accompanying sauce.

But over the years, perhaps due to the influence of cost-cutting chain restaurants, the prevalence of commercial smokers, or just the reality of economically pinched sole proprietors forced to cook meat for four hours rather than smoke it for twelve, the art of smoked meat died away. Houston barbecue devolved into a menu of roast beef and tomato sauce, under-smoked and chewy pork ribs, stuffed bakers (baked potatoes) and chopped beef sandwiches in which the meat is just a tasteless sponge to soak up the sauce.

Recently, though, things are changing for the better. Clarence Pierson at Pierson & Company Bar-B-Q and Greg Gatlin at Gatlin’s BBQ have resurrected the great Houston tradition of pitmasters who are dedicated to the art of smoked meat. I call this style “contemporary East Texas” barbecue due to its equal focus on both beef and pork and on the intensely smoky flavor of the meat, with the accompanying sauce always on the side. One can see the influence of Central Texas barbecue begin to creep into East Texas, and that’s not necessarily a bad thing. 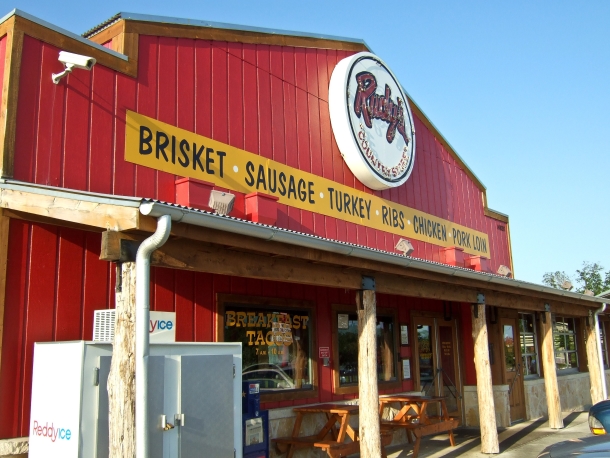 Which brings us to Rudy’s. Many friends, especially those from Central Texas, have been going to Rudy’s for years and rave about it. Still, I couldn’t accept that a chain restaurant could make exceptional barbecue. Then, one night, while scanning barbecue joint menus on the Internet like overly-obsessed barbecue connoisseurs like myself are wont to do, I came across the menu for Rudy’s. Meats by the pound and half-pound. Excellent. Both regular and jalapeno sausage. Good. No stuffed bakers to be found, though a “smoke potato” is listed in small type. I’ll let that slide. But what really interested me were the line items for beef brisket: “moist” and “lean” were listed separately. I’d never seen that in Houston.

Beef brisket is the quintessential dish of Central Texas-style barbecue. This style of barbecue developed from the nineteenth century tradition of Czech and German meat markets that sold the beef of the cattle ranchers of the area. If the butchered meat couldn’t be sold, it was smoked to preserve it that much longer and then sold to customers as a prepared meal. To this day, Central Texas barbecue is famously served on butcher paper rather than plates, usually without utensils, and traditionally without sauce.

The key to cooking a world-class barbecue brisket is to smoke it “low and slow.” This allows the smoke to penetrate the meat, imparting flavor, and to allow the heat to break down (render) the dense strands of fat and collagen that are a hallmark of this cut of beef. A perfectly smoked brisket jiggles like, well, let’s just say Jell-O. The “moist” cut comes from the fattier portion of the brisket (known as the “point” or “deckle”) and is the holy grail for barbecue connoisseurs. The alchemy that occurs from the combined flavor of the meat, smoke and rendered fat of the “moist” brisket has become the defining characteristic by which Central Texas barbecue is judged. 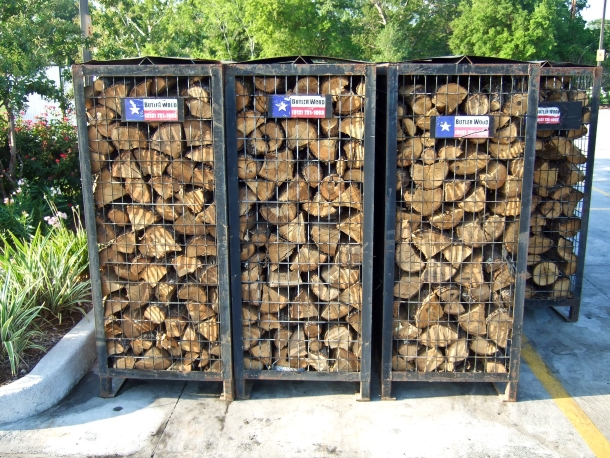 Cords of wood waiting for the firebox at Rudy’s

Rudy’s makes excellent brisket, maybe the best in Houston. Clues to the quality start in the parking lot, where cords of post oak wood wait patiently to sacrifice their soon-to-be-carbonized fibers for the greater good of barbecue nirvana. The side of the building reveals an external door to the firebox where wispy flames and smoldering embers can be seen through the grates. Inside, a horizontal brick pit, the Rolls Royce (or is that the Ford F-150?) of Texas barbecue smokers, lines the wall behind the order counter and carving blocks. “We smoke our briskets from 12-16 hours, and go through about 100 in a day,” says Jarrad Jensen, general manager of the Rudy’s on 290. 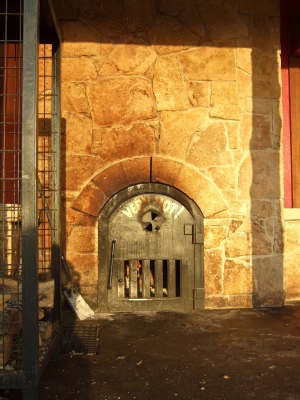 Although it’s debatable that Rudy’s has the best barbecue in Houston, it may well be the best barbecue joint as a whole. Another maddening characteristic of Houston barbecue is that many of the family-run shops aren’t open all the time. They simply don’t have the resources to stay open late and often are closed on Sunday and Monday. That’s understandable, but on the other hand it’s not unreasonable for Houston barbecue fans to expect access to good barbecue late and seven days a week. Rudy’s fills this need, being open daily until 10 p.m. (10:30 p.m. on weekends). Sure, there are other big barbecue joints in Houston that are open late every day, but I don’t find the barbecue to be on par with Rudy’s.

By all means, we should support Houston’s local, family-run barbecue joints whenever possible. But if they’re not open or the barbecue just isn’t up to standards, or if you have a taste for Central Texas barbecue and don’t want to drive to Austin, Rudy’s is a great option.

Still, in addition to the fact that Rudy’s is a chain restaurant, many Houstonians will never accept Rudy’s because it is a Central Texas (read: Austin) interloper into the entrenched East Texas tradition of barbecue for which Houston is known. But the fact is that Rudy’s is serious about smoking meat, and regional labels aside, that is what barbecue is all about.

6 Responses to Is Rudy’s the best barbecue joint in Houston?