Not long ago, a fellow Houston barbecue lover asked me if I’d been to the new Burns barbecue joint on Antoine Drive. “The new Burns BBQ?” I asked, confused. A few months before I’d written about the closing and subsequent reopening of one of Houston’s most storied barbecue joints, Burns BBQ. I was surprised they were already expanding to a second location.

That afternoon I made the drive north on Antoine from the Northwest Freeway. Sure enough, there was “Burns Old-Fashioned Pit Bar-B-Q” with an “Opening soon” sign displayed. I called the number listed, but there was no answer. I then called the other Burns BBQ for comment. “They’re not related to us – they’re just using the name,” I was told, cryptically. I figured I’d have to wait for the new location to open to get the whole story. 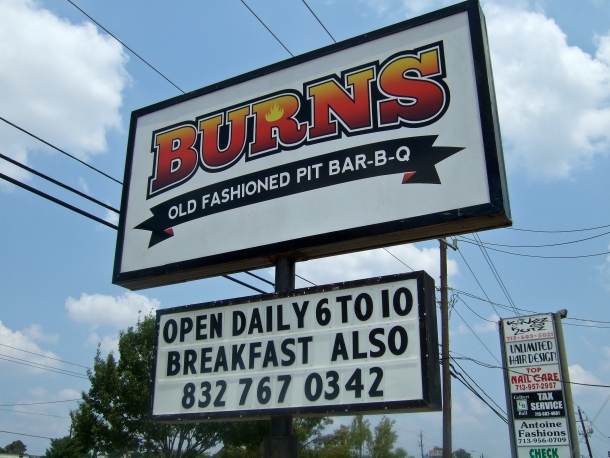 Recently, I visited the new Burns location for lunch, about three weeks after it opened. The first thing you notice when walking in to the spacious dining room is the fragrance of burning post oak – very much the same smell of the original (but now closed) Burns location on De Priest Street in Acres Homes. This is a good sign for any true barbecue joint.

I wanted to get a taste of all the Texas barbecue staples, so I ordered a three meat plate – sliced brisket, pork spare ribs, homemade hot links – and a separate slab of baby back ribs. The sliced brisket was dry; more suited to be chopped up and made in to a sandwich. The not-too-sweet sauce was a big help for the brisket. The spare ribs were excellent and the baby backs were some of the best I’ve had in Texas (baby backs are not a specialty here – they are often cooked to a crisp and lack the subtlety of the pork-centric barbecue joints in places like North Carolina). 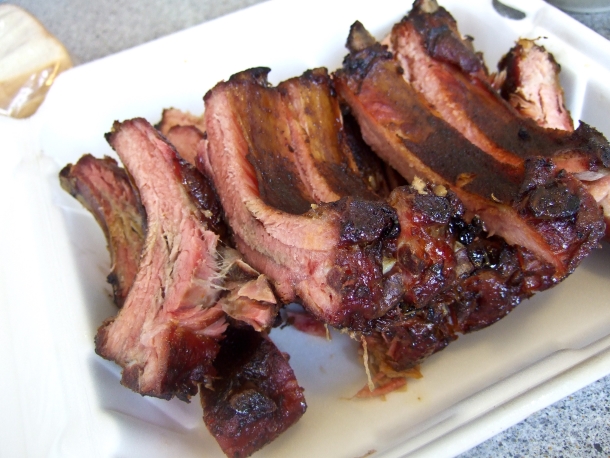 Baby back ribs at Burns

But the stars of the show were the homemade hot links. These sausages are one of the great treasures of East Texas-style barbecue. Small in diameter with a thin, snappy casing, the combination of spices and rich, creamy meat filling is addictive. I returned a couple weeks later just for the ribs and hot links.

After a late lunch, the dining room had thinned out and I walked up to the counter and asked to speak with the owner. Now I would find out the story of the new Burns BBQ. Gary Burns walked out and greeted me with a smile. “How’d you like the barbecue?” were the first words out of his mouth.

Gary is the son of the late Roy Burns, the legendary Houston pitmaster of the De Priest Street location. Now it made sense. According to Gary there is no business relationship between the two Burns locations (the North Shepherd location is owned by Gary’s sister – Roy’s daughter – Kathy Braden). They are only related by family ties. 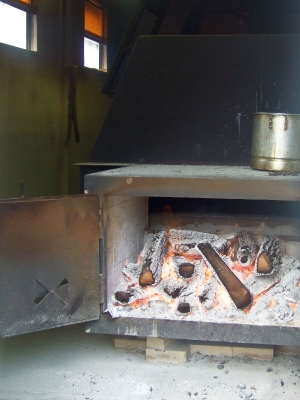 Gary graciously took time out from his position at the carving block to show me the custom fabricated smoker he had made for the restaurant. Winding our way through the back of the restaurant, we pushed through some swinging doors and were hit by a blast of heat and intense post oak smoke. A shed structure had been built onto the back of the restaurant just to house the enormous black steel smoker. According to Gary, “We built the shed and left one wall off. Then we brought the smoker in on a big crane and slid it in. Then we finished the shed.”

Gary talked about learning the art of barbecue from his dad and how the business has changed. “Some of the things we have now, like pulled pork and baby back ribs, aren’t something my dad would have made,” he said, “but that’s what people want these days.” Which is fine by me, as long as those ribs and hot links are always available.

So the mystery is solved: one of Houston most beloved barbecue joints, seemingly closed for good not too long ago, has been resurrected in two different locations. Both joints have similar menus and almost identical styles, thanks to family tradition. Both, no doubt, will be successful and carry on the tradition of Roy Burns, and that’s good news for Houston barbecue lovers.