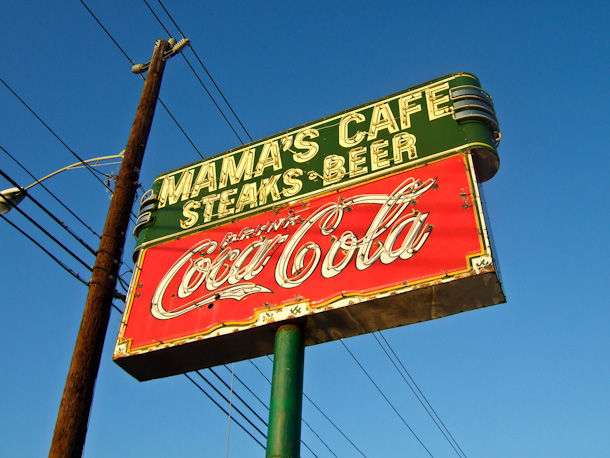 This challenge features two oft-mentioned destinations for great CFS in Houston: Mama’s Cafe vs. Frank’s Chop House. Both of these west Houston joints feature big menus full of the most comforting of comfort food, but diverge in pricing and atmosphere: Mama’s being more of a casual blue collar joint and Frank’s a decidedly white collar destination on the edge of River Oaks.

Mama’s Cafe is a legacy of famed San Antonio restaurateur Cappy Lawton. The size of this now small (3 locations) Texas chain has ebbed and flowed over the decades. It’s solidly in the Chili’s mold of a casual, bright, friendly place for a family to go for a night out. The staff is welcoming and efficient, big screen TVs are tuned to sports channels, and walls are covered with Texas memorabilia.

The menu features a mishmash of the greatest hits of Texas comfort food: burgers, fried seafood platters, meat loaf, liver and onions, and a whole section of Tex-Mex classics.

The printed menu features one CFS: The “Texas-sized” at $10.99. The specials board also listed a junior version for $8.99. I went with the Texas-sized. Unique among most CFS joints, Mama’s offers two preparations: the standard deep-fried option and a “flat grilled” version (essentially pan-fried). I tried both, and although the flat grilled was acceptable, I’d stick with the deep fried. The comments below reflect the deep fried version. 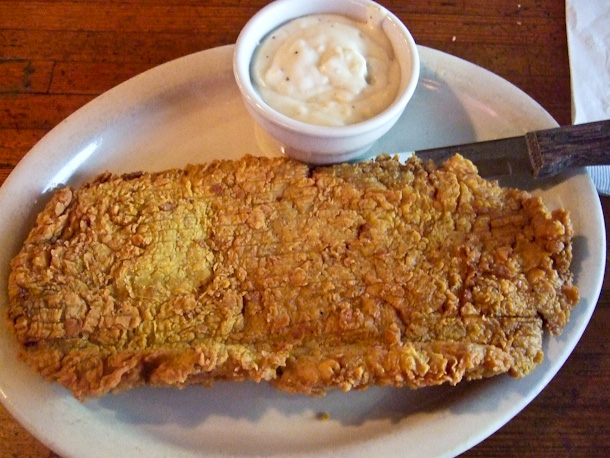 Meat. A standard-issue cut of CFS meat: relatively thin but not too tenderized until its falling apart. The meat flavor is good, but I detected little or no seasoning on the meat itself.

Crust. The deep-fried version was well-fried, golden-brown and shattered when you cut into it. It wasn’t too thick – the ratio of crust to meat was good. It was somewhat bland. Again, a lack of appropriate seasoning is a drawback in my opinion, but the gravy helped.

Gravy. Good. A creamy consistency with proper seasoning and fat content. There was a slightly artificial flavor to the gravy – similar to a powdered chicken stock – but this was not unpleasant and actually helped to offset the lack of seasoning on the CFS itself.

Value. Good. This “Texas-sized” CFS was typical of most larger chicken-fried steaks in Houston, covering the entire length of the plate. At $10.99 it’s a good, but not great, value.

Extras. Average. The red-skinned mashed potatoes that come with the CFS were basically just chopped up with the skins on. Green sides like steamed broccoli were all acceptable. Dinner rolls were just OK. We were not offered corn bread.

Overall grade: B-. The CFS at Mama’s Cafe is perfectly acceptable. If you’re in the neighborhood and craving CFS, it’s a good option. The average CFS and extras are offset by a flavorful gravy, a comfortable atmosphere, friendly servers, late-night hours and cold beer served in frosty mugs.

Frank’s is owned by long-time Houston restaurateur Frank Crappito. It’s in a nondescript building near the corner of Westheimer and Weslayan. The dining room is clubby, low-lit and low-slung, with lots of dark wood paneling and big booths along the back wall. Clientele is upscale: a typical table might include four older men sporting the River Oaks casual uniform: a Polo button-down, Dockers khakis and Sperry Top-siders.

Service is impeccable and friendly. Frank’s offers a great combination of a comfortable atmosphere with white table cloth service.

The menu offers classic chop house comfort food: wedge salad with blue cheese dressing, rack of lamb, double-bone pork chop, strip and ribeye steaks. Frank’s is particularly well-known for fried chicken and chicken-fried steak. The CFS is listed as “Best in Texas” and comes with mashed potatoes, roast vegetables and cream gravy. Gravy is ladled on top by default – ask for it on the side if that is your preference.

Crust. A relatively thin and fragile crust that adheres well to the meat. A much higher ratio of meat to crust than diner-style CFS, and that’s a plus for some CFS connoisseurs. Flavor and seasoning is excellent.

Gravy. Good. Proper consistency and richness. The flavor is deep and satisfying with a strong note of pepper. I’m always surprised at some restaurants where the “pepper gravy” seems to have no trace of pepper – this isn’t a problem at Frank’s.

Value. Poor. The CFS at Frank’s is offered for an eye-popping $19. Admittedly, the quality of ingredients and execution warrants an upscale price, but the size is about half that of a typical “Texas-sized” diner CFS.

Extras. Very good. A basket of fresh, moist bread and room-temperature butter (as it should be) is good but not so good you fill up before the main course arrives. The extra-creamy mashed potatoes are redolent of generous amounts of butter. Even the roasted vegetables, a side dish I rarely get excited about, were delicious.

Overall grade: B+. The high price here is offset by a great overall experience: excellent CFS and sides and a friendly, welcoming atmosphere.

Even at the whopping price of $19 for a relatively small CFS, Frank’s wins this one. Think of it as a “special occasion CFS.” For the gentleman on a hot date but also craving CFS, Frank’s offers upscale food and a classy atmosphere. And who knows, if your date also orders CFS, it may be love at first bite.