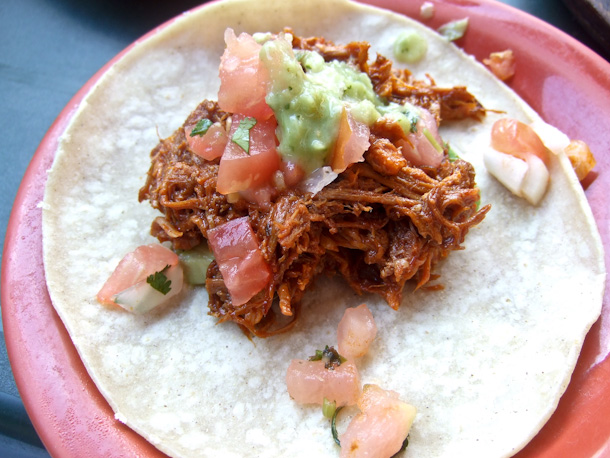 Has any animal provided more gastronomic pleasure to the human race than the pig? Probably not. Chicken may be healthier, and cow may be held in higher regard, but the myriad of pork dishes from every corner of the world is a testament to the versatility of this porcine player. Pork-centric cooking is often referred to as “nose-to-tail,” meaning every exotic part of the pig can be made into a dish or used as an ingredient. Pig skin? Chicharrones. Stomach? Cajun chaudin or pounce. Blood? Boudin noir.

One of the better-known and celebrated pig dishes in the U.S. is pulled pork. Associated mainly with the barbecue tradition of North Carolina, pulled pork involves slow smoking pork shoulder at low temperature until the connective tissues break down and the dense meat becomes so tender it falls apart. It’s hard, if not impossible, to find good North Carolina-style pulled pork in Houston. Fortunately, Houston’s tradition of Mexican cuisine provides a worthy – and some say better – substitute for American pulled pork. The Mexican version of pulled pork is called chilorio. 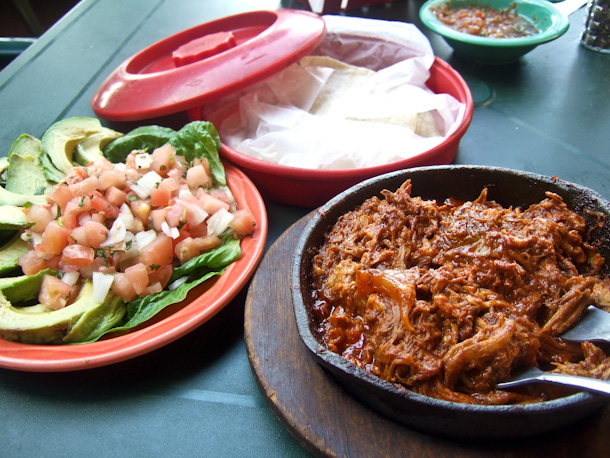 Chilorio and sides at Pico’s

Mexico, of course, can claim a long culinary tradition of world-renowned pork dishes. Chilorio is considered a specialty of the Mexican state of Sinaloa and is similar to better-known Mexican slow-cooked pork dishes like carnitas and cochinita de pibil. The main difference being that chilorio adds a smoky, fragrant chile sauce (similar to mole, but not as complex) to the pulled pork. It is speculated that the pungent cumin and chile-based sauce of chilorio is a precursor to the chili con carne (chili) of Texas and Tex-Mex fame. 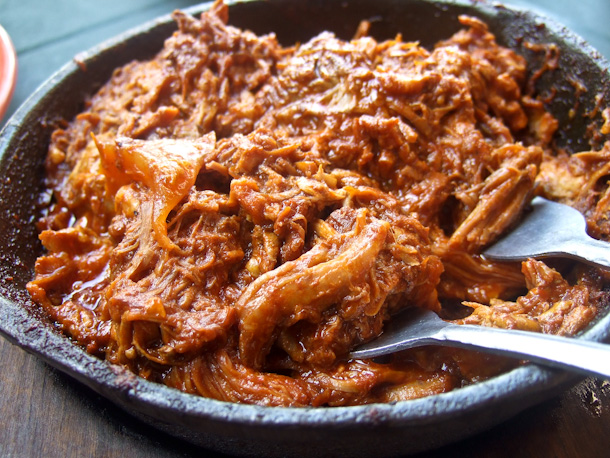 A typical recipe for chilorio is as follows. Pork shoulder is added to a cooking liquid, either water with vinegar or citrus added to it, or a chicken stock. The pork is slow-cooked in the liquid for at least 2 hours. In the meantime, ancho chiles (or, more authentically, pasilla chiles) are rehydrated, and then combined in a blender with cooked onions, cumin, oregano, garlic and some of the cooking liquid to create a sauce. Lard or bacon fat is heated in a heavy skillet and then the cooked and shredded pork is added and fried until caramelized and slightly crispy. The fat is drained, the sauce is added to the pork and the combined ingredients are simmered until the sauce thickens and the flavors combine.

The resulting dish is a creamy, smoky, chile-and-spice infused Mexican delicacy. Note that chilorio is Mexican and not Tex-Mex. You are unlikely to find it on the menu, alongside fajitas and enchiladas, at your favorite Tex-Mex joint. It is typically available in taquerias as a filling for tacos and at restaurants specializing in regional or interior Mexican cuisines.

In Houston, Picos Mex-Mex makes an excellent chilorio. It’s served in a hot cast-iron skillet with a side of sliced avocados, pico de gallo and warm corn tortillas. Scoop a generous portion of chilorio onto a tortilla, add a slice of avocado, sprinkle on some pico de gallo and salsa and enjoy one of the most delicious, though little-known, of classic Mexican pork dishes.