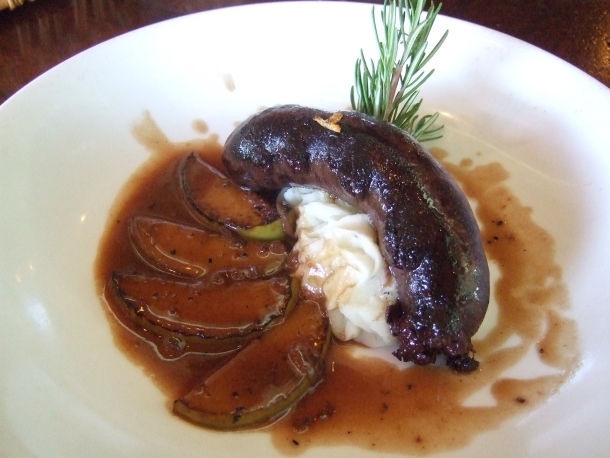 There’s something vaguely illicit about the dish known generically as blood sausage. The consumption of animal blood conjures images of sorcery and the occult. And the name itself is reminiscent of phrases like blood diamond, blood money, and blood sacrifice. Perhaps to counteract an instinctive aversion to the consumption of blood, creative chefs throughout history and across geography have come up with more palatable names for the dish: black pudding in the U.K., boudin rouge in Cajun country, boudin noir in France, morcilla in Spain and Latin America. Those endearing Germans, perhaps more direct and less squeamish than their neighbors, just call it what it is: blutwurst.

But whatever you call it, blood sausage is a sought-after delicacy for adventurous or well-traveled diners. It’s certainly not for everyone. In general, if you like offal dishes — that is, those featuring internal organs like liver, kidney, heart, stomach, brains, etc. — then you’ll probably like blood sausage. The basic recipe involves combining animal blood (pig or cow) with a filler (lard, rice, potatoes, or oatmeal) and herbs and spices, mixing everything into a kind of slurry, pouring that into a sausage casing, then poaching it until the blood coagulates and is fully cooked. The sausage can be refrigerated and eaten at a later time without further preparation, but it is usually grilled or fried.

It’s not always easy to find blood sausage in Houston. Feast Restaurant occasionally has black pudding on the menu. Sometimes Samba Grille features a great Spanish-style morcilla sausage. Colombian restaurants are a more consistent source for blood sausage, where the morcilla has a thin, snappy casing and a rice-y filler. One of the reasons it’s so hard to find it in Houston is because the health department frowns on the handling of animal blood in restaurants. In fact, it’s forbidden by health regulations. If a Houston restaurant claims they make their own blood sausage, they’re either skirting the rules or, more likely, just exaggerating.

An even harder-to-find version of blood sausage is the French-style boudin noir. The only consistent source for boudin noir I’ve found in Houston is Cafe Rabelais in University Village. This tiny bistro features an encyclopedic wine list and rustic French comfort food. The boudin noir here (procured from a local distributor) is served traditionally with caramelized apples and mashed potatoes. The sausage is simply grilled and very creamy, with small chunks of pork and flashes of herbs and spices throughout. The flavor has an intense earthiness with a somewhat metallic aftertaste. It is, frankly, what you would expect blood to taste like.

Eaten by itself, boudin noir is challenging even for the most adventurous palate. The key to enjoying this dish is to combine it with the additional ingredients provided. I’ll usually squeeze out a bit out the sausage (though grilled, the casing can be chewy), and then combine it with a piece of apple and a dollop of the mashed potatoes. The acidic sweetness of the apples and the creamy potatoes perfectly complement the earthiness of the sausage. Furthermore, this dish demands to be paired with wine. The richness of the sausage might suggest a big Bordeaux, but I’ve found this to be overwhelming on the palate. Try a Burgundy or a Côtes du Rhône for a more nuanced and complex pairing.