Travel is fatal to prejudice, bigotry, and narrow-mindedness, and many of our people need it sorely on these accounts.
Mark Twain, Innocents Abroad

Some time in my senior year of high school, I picked up a book called The Great Railway Bazaar by the travel writer Paul Theroux. It’s filled with all kinds of quirky observations and adventures about traveling abroad. After reading it, I said to myself, “Oh yes. This is what I want to do.” 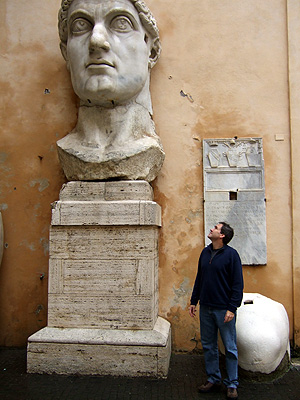 So in college I chose a major with a built-in travel component: architecture. “I’m sure you’ll agree, professor, that further study of this cathedral will require a site visit to take pictures and measurements. Perhaps there’s money in the school’s discretionary fund?”

I took my first trip to Europe as a 19-year-old sophomore. Having read about the wonders there, I half-expected to encounter beings of a higher intelligence, some kind of alien creatures with a culture more advanced than ours. At first, after traipsing through the galleries of the Louvre and the Musée d’Orsay and the Beauborg in Paris, I almost believed it.

Then on a train trip from Paris to Barcelona, we came to a screeching halt on the outskirts of Barcelona (delays were the norm back then — trips scheduled for 6 hours often took 24!). We stopped on a stretch of elevated track across from a residential building. Looking out the window, I found myself staring into a second floor apartment occupied by a Barcelonan family. For two hours I watched them go about the mundane tasks of life – eating, washing dishes, folding clothes, watching TV, talking on the phone. It was both revelatory and mesmerizing for a kid from Beaumont, Texas.

It was then that I started to realize that people are pretty much the same wherever you go in the world (an observation that has been borne out through subsequent decades of travel). Still, individuals and even whole nations have their own quirks and eccentricities. And they have stories, lots of stories. For some reason these stories fascinate me, endlessly.

I also came to discover that everyone has an opinion — and often a story — about food. Every single human being on the planet must eat food, and food is often entwined with our childhood, adulthood, livelihood, family, community, culture or national pride. If you want to strike up a conversation in a foreign country, ask someone where to find a good restaurant.

I inevitably find that the most interesting people I meet are lovers of good food and drink. The friends I’ve accumulated over the years — that is to say those friends I have chosen to keep in touch with even though our lives have diverged — are usually linked to a shared experience of food or eating. Whether it’s cooking improvised dinners in a tiny New York apartment or traveling hundreds of miles in a single day to sample the best barbecue in Texas, food and drink becomes a vehicle for creating friendships, memories and, yes, stories.

It’s not like I’m reinventing the wheel here. People in every corner of the world have been getting together to eat, drink, laugh and tell stories since the beginning of civilization. In that way, I’m just like everyone else. But I like to think I bring my own quirks, eccentricities and insights to the (dinner) table, and hopefully that comes through in my writing.

I’m available for freelance food and travel writing. If you have a project you think would be a good fit, feel free to contact me.