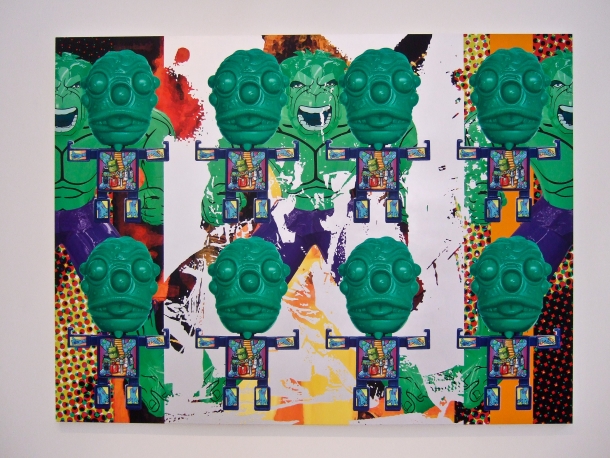 I’d been jonesing to get back to Los Angeles for a while. I was last there in 2004. I figured a package deal on Travelocity or the like was the way to go. Indeed, initial indications suggested 5 days in L.A. including plane, hotel, and car could be had for less than a grand. My only deal breakers were: 1. Must be under $1000, 2. Must be a non-stop flight, 3. Must not depart too early or arrive too late, and 4. Must stay in Santa Monica, preferably at the Loews. So for two weeks I obsessively checked Travelocity and other sites, watching prices, options and combinations change minute-by-minute. It was quite literally an online travel shell game. Needless to say, I learned a lot about how to use (manipulate) online travel sites. Finally, on the morning of my self-imposed deadline to close a deal, all the planets aligned: mid-morning and early evening direct flights on United/Continental, room at the Loews, and an “intermediate” rental car from Dollar. Five days and four nights all for the tidy sum of $880 per person, including taxes and fees. I bought two packages, one for me and one for my girlfriend, and we were off.

Photos below. Click on individual photos to see a larger version.

Texas Barbecue in Los Angeles
I’d been hearing good things about Texas barbecue in Los Angeles. Especially a place called Smoke City Market, recently given a very credible (for a Californian) and favorable review by the LA Weekly’s Jonathan Gold. We ended up at Smoke City, Bludso’s and Bigmista’s. All three offered outstanding Texas-style BBQ. I’d love to have a legitimate Central Texas-style barbecue joint like Smoke City Market in Houston.

Santa Monica & Venice Beach
For a vacation in L.A., Santa Monica is really the only place to stay as far as I’m concerned. Right on the water with access to walkable streets and freeway on-ramps to the rest of Los Angeles. For a place to stay, the Loews is a perfect choice if high-dollar spots like Shutters on the Beach and Casa del Mar are out of your budget. Great location, great staff, great rooms, great views. A rented-bike ride to Venice Beach was one of the highlights of our stay.

Buildings in Los Angeles
A few destinations on our itinerary: downtown L.A. (City Hall, the Caltrans Headquarters Building, the Disney Concert Hall, the Cathedral of Our Lady of the Angels), my alma mater the University of Southern California, the Getty Center and the Hollyhock House.

Los Angeles County Museum of Art
LACMA is an old stomping ground for me: I lived near here and spent a lot of time wandering the mishmash of galleries and buildings that make up the campus. Originally I had wanted to visit MOCA downtown, but it was closed on Tuesday and Wednesday. So we ended up at LACMA, whose evolution, controversies and changes I had followed from afar. The new Renzo Piano-designed Broad Contemporary Art Museum, with its Jeff Koons collection and other contemporary pop-art masters, and its gymnasium-sized Richard Serra sculptures, was especially entertaining.

Food in Los Angeles
Our food itinerary: Monday: In-N-Out Burger, Lou on Vine. Tuesday: Intelligentsia Coffee, Daikokuya Ramen, The Tasting Kitchen. Wednesday: Santa Monica Farmers Market, Smoke City Market, Sotto Restaurant. Thursday: Bludso’s BBQ, Bigmista’s BBQ. Note that there are no pics from our dinners — everywhere we went was too dark! Plaudits to my friend Jeremy for the Lou and Sotto recs. And as Lou (the proprietor of Lou on Vine) noted, the strength of food in L.A. is really in the so-called ethnic food area; high-end dining, though prevalent in L.A., is not quite up to par when compared to other world-class cities. So we stayed with the low-to-mid priced restaurants, and thanks to great recommendations and research, all of our dining experiences were excellent.

A few random take-aways from the trip: