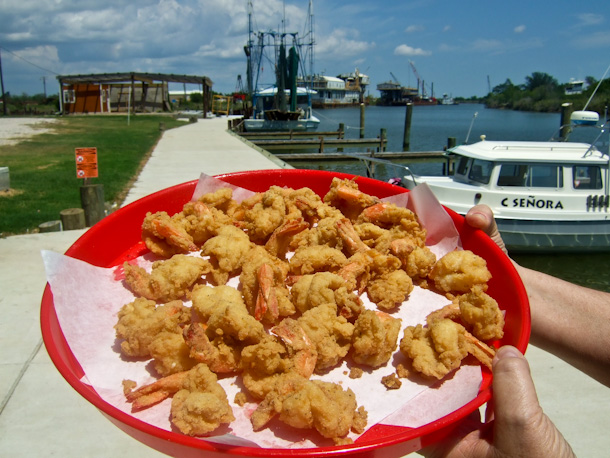 “Let me call the boat and see if they can bring some crabs in,” replied our waiter after I asked her if the restaurant had blue crabs on the lunch menu. In the two decades I’ve spent canvassing the far corners and remote outposts of Southeast Texas for the freshest fish in the most eccentric seafood shacks of the upper Gulf Coast, I’d never heard that response. “Slept in the Gulf last night” is a famous claim to freshness of Houston seafood restaurants, but “Scuttling along the floor of Galveston Bay thirty minutes ago” sets a new standard.

I was with a group of friends at the Hurricane Restaurant and Club, a recently opened seafood joint in an isolated area of Chambers County, on the east side of Galveston Bay. It’s in a town – village really – called Oak Island that’s about 20 minutes south of Interstate 10, down a two-lane black top that snakes past bait stores and fishing cabins that back up to Lake Anahuac and Trinity Bay. For Southeast Texans, this area bordering the Anahuac National Wildlife Refuge is a mecca for hunting (mostly ducks) and saltwater and freshwater fishing (trout, redfish, bass, catfish). 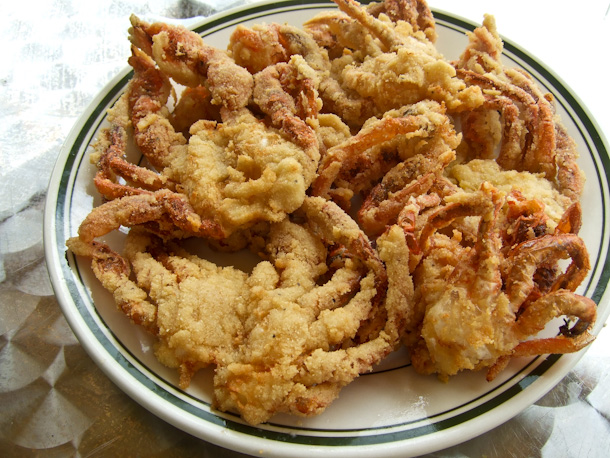 Our first visit to the Hurricane was last March, possibly the most fruitful month for Gulf Coast seafood lovers. Oysters, having marinated in the cold waters of Galveston Bay throughout the winter, are at their sweetest and plumpest. Blue crabs are just beginning to stir from their winter doldrums, growing and shedding their hard shells to offer, however briefly, the entirety of their soft bodies for the pleasure of seafood lovers. And then there’s the crawfish: again, early in the season, but still plentiful and of a decent size. And the shrimp: always. 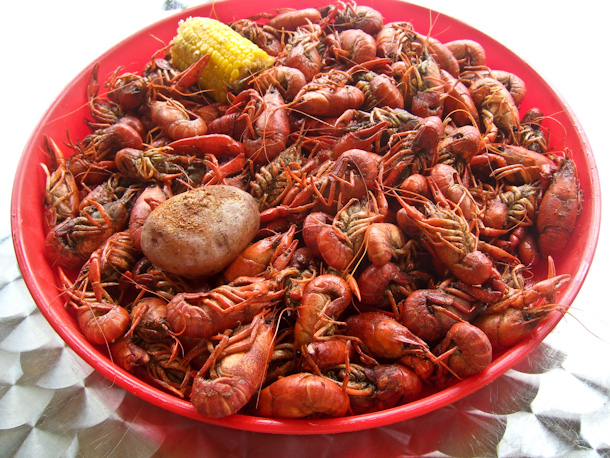 Alas, the response from the boat was bad news: no crabs today. But this did not deter my friends, who sat wild-eyed in the small dining room just steps away from Double Bayou where fishing boats puttered back and forth from Trinity Bay to slips along the shore, from ordering seafood by the pound and by the dozen. Six dozen oysters! Eight pounds of crawfish! Four dozen fried shrimp! Our waiter scribbled furiously and glanced up occasionally with what seemed like fear in her eyes.

I cautioned my friends about ordering large amounts of seafood in a restaurant we’d never been to. I’d visited too many unknown places where we ordered dozens-of-this and pounds-of-that only to find out that it wasn’t very good. Money and calories wasted. But my friends were having none of it. Blind faith often yields great reward or great disappointment. In this case, they were right: we were rewarded with some of the best seafood we’d ever eaten.

Burlap sacks of oysters sat in coolers a few feet from our table. In the corner of the dining room, on a slab of raised floor where a local honky-tonk band would otherwise play on Saturday nights, an oyster shucking table stood ready. A young man of high school age, certainly a local, was recruited from the back of the restaurant to shuck oysters, which he did, methodically and without complaint, for what seemed like hours as we ordered dozen after dozen. We tipped him separately, and generously, on our way out. 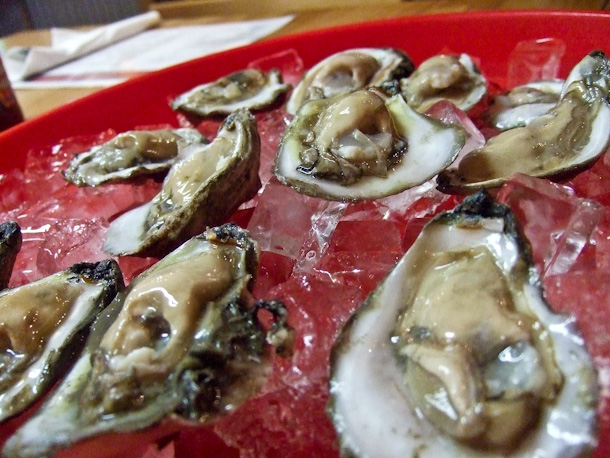 Raw oysters on the half-shell

These oysters, some of the best I’ve ever had, came from Jeri’s Seafood – one of the legendary and largest seafood purveyors of upper Galveston Bay. Jeri’s is located in Smith Point, another 20 minutes south of Oak Island (note that Oak Island really isn’t an island). In fact, I’d heard about The Hurricane from Jim Gossen, a Houston seafood distributor and friend, who tipped me off to a seafood joint deep in the boondocks where Jeri’s oyster shuckers go for a beer after work. I suspected Jeri’s sends some of their best oysters here. Undoubtedly, the other seafood staples here like shrimp, crabs and crawfish are sourced locally.

The Hurricane is the brainchild of local entrepreneur Artie Presley. It’s the crown jewel of a small development in Oak Island that caters to outdoorsmen and includes a hunting lodge, motel, and a convenience store/gas station. It’s a great attraction for Oak Island, which is otherwise mainly a fishing village. Driving through town (population of maybe 500), many of the houses have crab traps stacked out front. At the main crossroads are commercial buildings and parking lots filled with refrigerated trucks with some version “Seafood Company” lettered on the side.

The Hurricane Restaurant is named after Hurricane Ike that slammed head-on into this small fishing community in 2008. Some 350 homes were literally washed away. The future of Oak Island was grim. The Federal Emergency Management Agency (FEMA), according to locals, offered little help. Die-hard residents slept in tents and abandoned boats. Then, in a fortuitous coincidence usually reserved for Hollywood scripts, relief arrived in the form of a Brooklyn-born musician clad all in black.

Neil Diamond was performing in Houston shortly after Hurricane Ike hit the area. In a conversation with then-Mayor Bill White, Diamond asked about hurricane relief efforts. White conveyed the grim reality in many of the smaller communities of Southeast Texas. Diamond asked to see the devastation firsthand. White got in touch with Anahuac Mayor Guy Jackson. Diamond and an entourage of local officials made the drive to Oak Island.

During their tour, they came upon a community meeting being held outdoors (there were no buildings left). Diamond and crew stopped and quietly sat in on the meeting. Only one or two locals recognized the visitor. After the tour and meeting Diamond pledged 100 percent of the merchandise sales from his tour to Oak Island. During the remainder of his tour he told audiences about Oak Island and his pledge to contribute. The audiences literally bought into it, to the tune of almost $1.8 million in contributions. Today, some of the neediest families have returned to Oak Island to live in 14 houses paid for with funds raised by Neil Diamond.

Driving through Oak Island today reveals a community still recovering from Ike. For every rebuilt house there is an abandoned or destroyed structure. The rusting hulk of a car sits tilting in a field of saltgrass. Sharper eyes will notice debris still hanging from the tops of trees whose height marks the massive storm surge that pushed much of Galveston Bay many miles north. 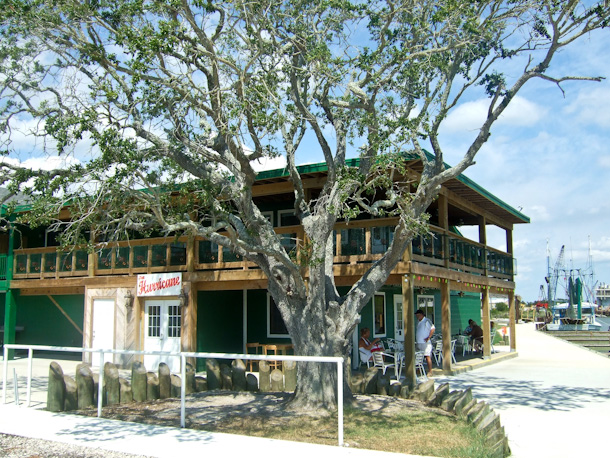 The tidy complex of buildings that makes up Presley’s Oak Island Market and Hurricane Restaurant is a welcome destination for travelers. The restaurant itself is in two-story building decorated with crab traps and announced with a neon sign; a huge, grizzled survivor of an oak tree stands out front, listing slightly to the north as a reminder of the force of wind and water brought by Ike.

I recently returned with a group of friends for a Saturday night dinner in August. The lower main dining room was crowded with locals. Uniformed game wardens sat in a booth eating dinner. A former class of Anahuac High School was having a reunion in the second floor party room. I chatted up the bartender – we had friends in common in the Winnie area – and after we sat down he sent owner Artie Presley over to our table.

Presley, a big man with the deep tan of every outdoorsman in these parts, joined us and enthusiastically recounted the successes and travails of a first-time restaurateur. “We’re still kind of learning the ropes here,” he said. Indeed the big party upstairs tested the mettle of his harried staff – waiters scurried throughout the dining room and orders arrived slowly. But the beer was cold and the company was good. Oyster season had passed so we loaded up on blue crabs and shrimp (“We’ll start with four dozen shrimp!”).

A recent and welcome addition to the menu was barbecue crab – that original dish of Southeast Texas that inspires a cult following for its spicy treatment of whole blue crabs. Giant piles of barbecue crabs arrived at our table. We smashed and hacked at the crabs until all of the tender fresh meat was stripped from the carcasses. 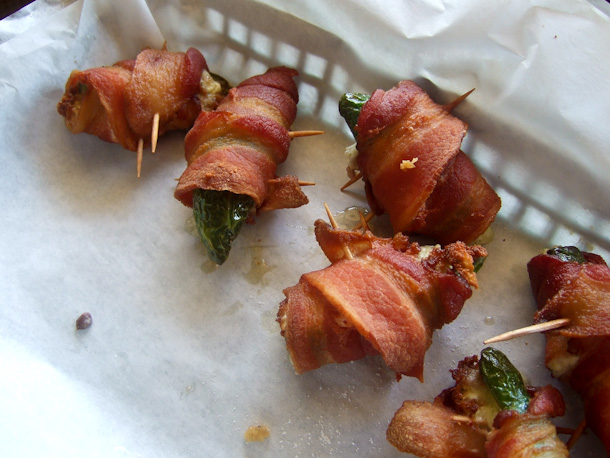 The butterflied, breaded and fried shrimp were the essence of freshness. There is simply no match between the shrimp you get in big city restaurants and the shrimp you get right off the dock. Another standout dish is the “Gator Egg” which is a combination of bacon, cheese and jalapeno peppers (a variation of jalapeno poppers). These salt and spice bombs are as addictive as they are unsubtle; my friends and I, even the seafood snobs among us, happily devoured them.

By the time we were leaving around 10pm, the kitchen had closed and the bar crowd was ramping up. We said goodbye to Presley and his staff and drove the hour back to Houston, singing along to Neil Diamond on satellite radio and thinking about the next time we would return to Oak Island.

Notes:
It’s not easy to find The Hurricane. The address baffles both Google Maps and GPS. If you can get to West Bayshore in Oak Island and drive all the way to the end, you’ll eventually find it. Otherwise ask a local.

There is little or no AT&T cell phone coverage. Verizon seems to work.

Stick to the seasonal, fresh seafood on the menu. There are other things like burgers and steaks, but you can get those anywhere. Service is friendly but leisurely; go with the local flow and don’t visit if you’re in a hurry.

4 Responses to Return to Oak Island