Taking a Day Off at Taqueria Taconmadre 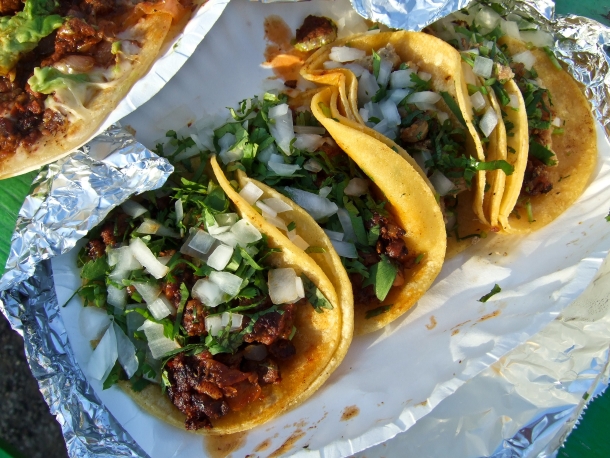 As a food writer, I’m often asked, “When you’re not going to restaurants for a writing assignment, where do you go to eat?”

Although I have my regular spots, the deciding factors are simplicity and consistency. Simplicity in the sense that I’m not out to try the latest and trendiest dishes. I want something simple, filling and comforting. Similarly, I want the chosen dish to be exactly the same every time I order it. I eat enough bad food exploring new restaurants; on my occasional days off I want the meal to be rock solid.

Over the years, I’ve collected a few places as my go-to joints for days off. At my neighborhood sushi joint, I sit at the bar and get the exact same thing every time: an order of California rolls and a mixed plate of salmon and tuna nigiri. The sushi chef, who is always there, doesn’t even bother to ask me what I want. We exchange pleasantries and he gets to work making my order (perfectly fresh and well-prepared, every time). He doesn’t know my name or that I’m a food writer, so he always jokes, “You eat the same thing every time. You should be more adventurous!” If only he knew.

Another go-to joint is a taqueria. One of my favorite taquerias is Taconmadre on Crown Street east of downtown. It’s a big green bus that has the treasurable feature of being open twenty-four hours, seven days a week. It’s about ten minutes from my house. I’ve found that Taconmadre is one of the most consistently delicious taco trucks inside the loop. And at the going rate of $1.50 a taco, it’s fast and cheap. 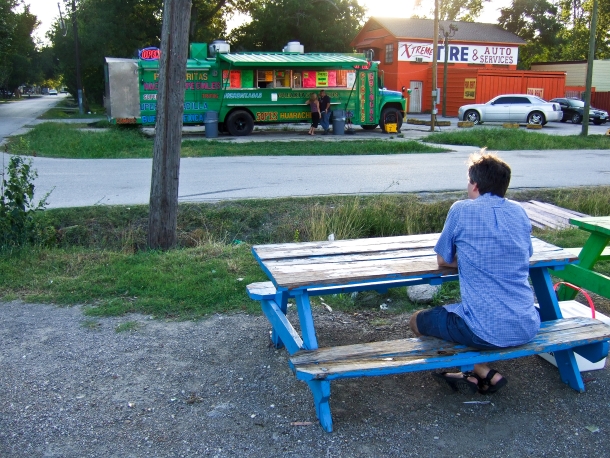 Waiting for tacos, or, the glamorous life of a food writer

My order is always the same: two tacos al pastor (seasoned pork), two suadero tacos (brisket or other beef from the underside of the cow), and one each of pirata and gringa tacos. The pastor and suadero tacos are standard Mexico City versions: two corn tortillas cradle the meat and then onions and cilantro are piled on top. Homemade green and red sauce and juice from a lime are drizzled on top to wake it up and add more spice. 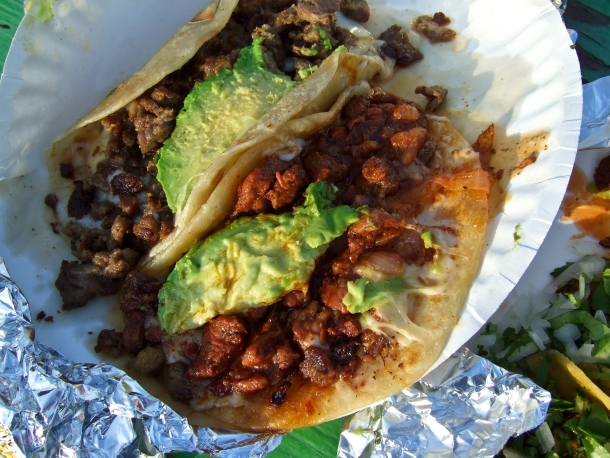 Pirata and gringa tacos at Taconmadre

The pirata and gringa tacos are considered to be a bastardization of traditional Mexico City tacos, but are simple and delicious nonetheless. Flour tortillas are grilled with a layer of stringy, melty cheese, then topped with beef (pirata) or pork (gringa), an avocado slice, and sometimes grilled onions. The gringa taco is rumored to have been invented at El Fogoncito restaurant in Mexico City when two American women once ordered tacos al pastor with flour instead of corn tortillas. I’ve never been able to find an etymology for the pirata taco. Based on the name alone, it must be interesting, whatever it is.

When I tell people where I eat on my days off, the usual response is, “Wow. That must be a real step down from the fancy restaurants!” But this betrays a common misunderstanding about the enjoyment of food. The calculation that most people make is: expensive food = good food; cheap food = bad food. But the reality is, the best tacos al pastor at $1.50 each can provide just as much gustatory pleasure and complexity as a tiny dish of Osetra caviar at $300 a portion.

I’m sure people with the means to eat caviar on a regular basis, but who would never be seen eating at a taco truck, would vehemently disagree. But take it from a food writer who’s eaten both: it’s true.

1 Response to Taking a Day Off at Taqueria Taconmadre