The Soul of Houston: Mikki’s Cafe 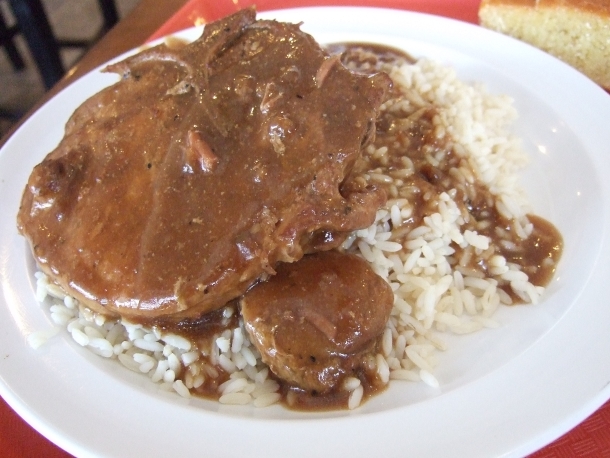 The smothered pork chop at Mikki’s Soul Food Cafe covers most of the large platter it’s served on. It’s a good 6-8 inches across, bone-in, drenched in a classic brown gravy and teetering ominously on an enormous pile of white rice. It’s one of the featured dishes at this soul food restaurant in southwest Houston, on West Bellfort, just off the 59 freeway.

Mikki’s opened in 2001 as a catering business run by its current owner, Jeanette Williams. Success of the catering business resulted in the opening of the restaurant shortly thereafter, and it’s been at the current location ever since. On a recent weekday lunch, the dining room had the comfortable feel of a neighborhood social club, with tables of individual diners watching a big-screen TV as they plowed through enormous portions of stuffed bell peppers and turkey wings, while tables of two and four-tops lounged after lunch discussing the events of the day. There was a steady stream of patrons collecting to-go orders.

Mikki’s is a family business. Daughter Jeanelle is an assistant manager, son Craig Joseph Jr. heads up marketing and daughter-in-law Latasha Joseph is operations manager. All are all involved in day-to-day operations of the restaurant. Mikki’s is billed as “just like eating at Grandma’s house.” And in fact Jeanette’s cooking experience taps the glorious tradition of Houston soul food as an extension of Louisiana Creole and Cajun cooking (her family hails from Opelousas, La.).

Over the years, Mikki’s has become somewhat of a destination for visiting African American entertainers and athletes. A whole wall of the restaurant features pictures of singers like Sean “P-Diddy” Combs, Ice Cube and Bow Wow as well as R&B/Soul legends like Bryan McKnight and the O’Jays. NFL athletes Adrian Peterson and Priest Holmes also are represented.

Ultimately though, a restaurant is judged by its menu, and a brief sampling of the food at Mikki’s confirms that it delivers the goods. The previously mentioned pork chop was excellent. The brown gravy imparted the requisite richness and comfort level that is to be expected, without being oversalted as many gravies are. The pork chop itself was, for the most part, tender and moist. The tenderloin meat just next to the bone was exceptional. Having worked my way through most of the chop, there were only small bits of pork, rice and gravy left over. Dousing on a little hot sauce and mixing it all together in a kind of impromptu casserole yielded forkfuls of the most comforting soul food in recent memory.

The sides also were good. The boiled cabbage was … boiled cabbage, but fresh with a smoky essence. The special for the day, broccoli rice casserole, had a great flavor and texture (not too soupy) with suitably crunchy (not overcooked) pieces of broccoli throughout. Cornbread came wrapped in cringe-inducing plastic wrap, yielding an overly dense texture, but the flavor of sweet corn came through nicely.

Prices are a bit high on average, with most dishes over 10 dollars, but that can be forgiven as the quality of ingredients seemed high. Overall, Mikki’s delivers excellent soul food in huge portions in a friendly atmosphere.