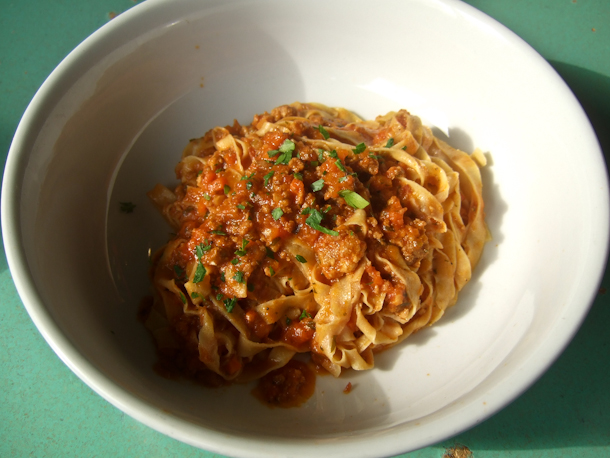 The diversification of Italian cuisine as it gained popularity and spread throughout the world after World War II is well-documented. For example, “Italian-American” cuisine is best represented by the iconic “Spaghetti and meatballs” which, although inspired by traditional Italian dishes, is not found on the menus of ristoranti and trattorie in Italy (restaurants with “tourist menus” are possible exceptions).

Some consider this diversification as improving on a cuisine that now really belongs to the world; others consider it a corruption of a cuisine that should remain pure and inviolable. Regrettably, corrupted Italian dishes – those that are inferior to the originals – seem to far outnumber the improvements.

Arguably the most corrupted of all Italian dishes is “bolognese.” Spaghetti bolognese, as it is known in the United States and Great Britain, is a perversion of Tagliatelle al Ragù alla Bolognese which loosely translates to “fresh ribbon pasta with a meat sauce in the style of Bologna.” This refers to the sauce’s reputed origin in the city of Bologna, in the culinarily rich Italian region of Emilia-Romagna.

At its most simple and authentic, ragù alla Bolognese is a savory sauce (almost stew) of sauteed aromatic ingredients (onions, celery and carrots, known as soffritto) combined with meats (ground beef, pork, lamb, pancetta), tomato paste, dry white wine and whole milk. It’s served with Tagliatelle, a fresh egg pasta made in the shape of wide ribbons. Parmigiano-Reggiano cheese is grated on top.

On the other hand, spaghetti bolognese (affectionately known as “spag bol” by the Brits) is often not much more than browned ground beef combined with tomato sauce and ladeled on top of packaged spaghetti. Canned spag bol is a traditional favorite of U.K. students because it’s cheap and filling (kind of the equivalent of Top Ramen for U.S. students). For a truly corrupted American version, think of a can of Manwich poured on top of overcooked spaghetti and topped with that strange Parmesan cheese that comes in the green container.

Italian chefs became so horrified at the worldwide debasement of bolognese that in January 2010 they organized a “Bolognese Day” in which 450 Italian chefs at restaurants throughout the world committed to cooking the canonical recipe established by the Italian Academy of Cuisine and the Chamber of Commerce of the City of Bologna.

In Houston, an excellent version of Tagliatelle alla Bolognese can be found at Giacomo’s Cibo e Vino (“Giacomo’s food and wine”). Owner Lynette Hawkins has been cooking some of Houston’s best Italian cuisine for decades; she previously owned La Mora Cucina Toscana in Montrose.

The Bolognese here is based on a recipe by one of the foremost authorities on Italian cuisine, Marcella Hazan. Although the recipe for bolognese may seem simple, there are two defining characteristics that must be achieved to assure success. First, the balance between the acidity of the wine and the richness of the milk and fat is crucial. Too much acid and the sauce can be sour; too much milk and the overall flavor becomes one-dimensional and any complexity is lost.

Secondly, the consistency of the sauce must not be too watery or too thick. This is achieved by simmering the ingredients for just the right amount of time – usually about three hours.

Hawkins resolves these issues perfectly and produces a bolognese that is savory, complex and nicely balanced (slightly more acidic than creamy, in this case). The consistency is similarly well-executed with just enough thickness to cling to and cover the handmade pasta. What’s the secret to Hawkins’ authentic bolognese success? “I’ve been perfecting this recipe for twenty years,” she says. “Hopefully I’ve got it right.”

In addition to excellent pasta, meat and fish, Giacomo’s is known for great side dishes of simply seasoned and cooked vegetables. Platters of these dishes (variously referred to as antipasti, contorni and cicchetti) are visible as you enter the restaurant. Choose one or two of these side dishes to go with your Tagliatelle alla Bolognese (or whatever main course you choose). On a recent visit, Brussels sprouts sauteed in olive oil, garlic and pancetta were wonderfully crunchy and caramelized. Quartinos (carafes) of very good Italian wines are reasonably priced at under $10.