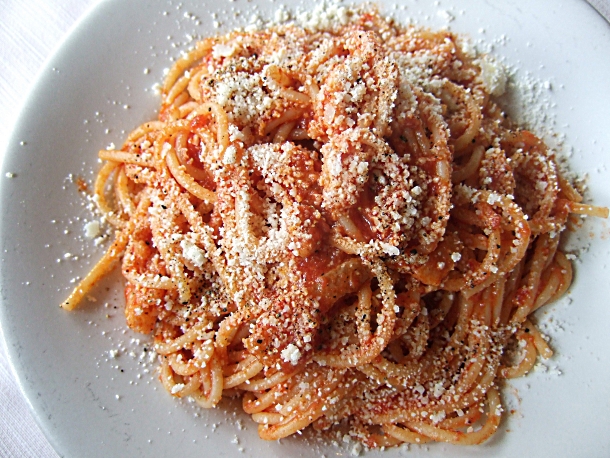 The Via Salaria — the Salt Road — was one of the earliest roads built by ancient Rome to lash together its far-flung empire.

The actual path of the road predated the Romans — the Sabine people of central Italy would trek down from their mountain redoubts to the mouth of the Tiber river, where they would collect sea salt which at the time was a prized commodity. Today the Via Salaria is labeled the SS4, or Strada Statale 4 (State Highway 4). It’s an otherwise mundane two-lane blacktop that overlays the track of the original Roman road, exceptional only in the path of history which it follows both literally and figuratively. 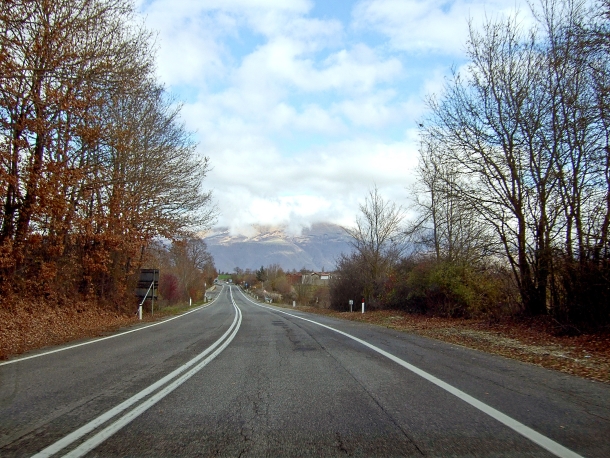 The Via Salaria north of Rome, Italy

We were driving north on the SS4 from Rome to the small town of Amatrice. It’s generally agreed that Amatrice is the birthplace of the classic pasta dish spaghetti all’amatriciana. I’d eaten amatriciana for years when visiting Rome, but like many dishes and cuisines in this part of Italy, the provenance, recipe and ingredients of amatriciana were all in dispute. I decided to visit the supposed birthplace of the dish and find out what an authentic version of amatriciana really tastes like.

First, a few notes about the many-layered history of the dish. Although there is no definitive history of the dish, one theory is that it evolved from the pastoral (shepherding) traditions of the area. In this theory, the basis for the recipe begins in the 15th or 16th century when migrant shepherds living in a nearby town used readily available ingredients to make the classic dish pasta alla gricia. The ingredients were pecorino (a readily available sheep’s milk cheese), guanciale (salt-cured pork jowl), black pepper and dried pasta (the final three ingredients being resistant to spoilage). Pasta alla gricia became known as amatriciana bianca or the “white amatriciana,” referring to the color of the sauce made from the pecorino cheese.

Then, sometime in the 17th century, the tomato was introduced to Italy from the New World. It was only then that the Italian love affair with tomatoes began. Tomato sauces became a staple of Italian cooking, and eventually came to define Italian cuisine as it traveled with waves of Italian immigrants all over the world. The classic amatriciana bianca recipe was no match of this pomodoran invasion, and a generous portion of tomato sauce was layered on top of the original shepherd’s concoction. Somewhere along the way, red pepper flakes were added to the recipe to give it some spicy heat. Amatriciana bianca had transformed into amatriciana rosso and a canonical recipe was established. 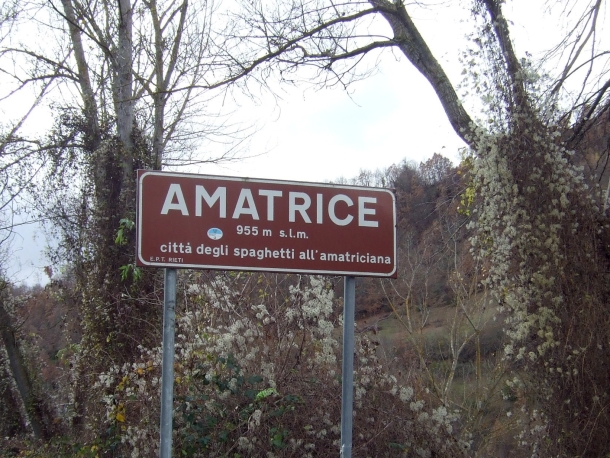 As we drove into town, a sign announced our arrival into Amatrice. While signs in the U.S. may celebrate a city as home to the largest ball of twine or the local high school football team, city signs in Italy often denote the birthplace of an emperor, or perhaps more importantly, the birthplace of a dish like spaghetti all’amatriciana. Such was the case in Amatrice.

Our destination was Albergo-Ristorante La Conca, a source for traditional amatriciana mentioned in the book Italy for the Gourmet Traveler. The restaurant was empty for lunch on a bright day in November (off season for this area of Italy). But the staff was eager to take care of us; they knew exactly what we wanted when we walked in the door (did we have an American flag painted on our foreheads?). The spaghetti all’amatriciana here hewed to the traditional recipe: pecorino, guanciale, tomato sauce, black pepper, red pepper flakes and dried spaghetti pasta. It was the best I’ve ever had.

But the story doesn’t end there. The amatriciana I ate in Amatrice only vaguely resembled the dish I’d eaten in Rome for so many years. What accounted for the discrepancy? The ancient Romans, of course, were known for assimilating the culture and traditions of its conquered peoples. Similarly, and perhaps even more controversially, contemporary Romans have assimilated amatriciana as a classic dish of cucina romana — the cuisine of Rome.

This next layer in the flavor and history of amatriciana originated when migrations from the countryside (Amatrice) to the city (Rome) brought an influx of regional cooking into the capital city. There, the dish got its own slightly different version of the name: pasta alla matriciana. Ingredients were added in various combinations: onions, garlic, white wine, basil, sage. The pasta is usually bucatini, a thicker, hollow version of spaghetti. Indeed the dish I’d been eating in Rome all those years was bucatini alla matriciana. A delicious dish no doubt, but lacking in the focused simplicity of the classic spaghetti all’amatriciana I sampled in Amatrice. 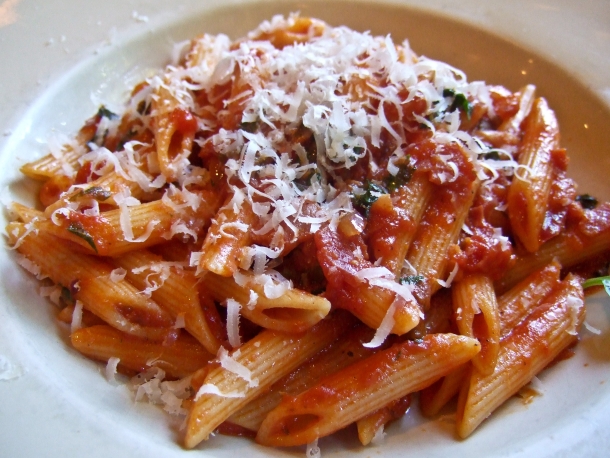 Penne amatriciana at Nino’s in Houston

Back in Houston, I searched for a restaurant that serves amatriciana. Could I find a faithful representation of this dish in a city known for many middling Italian restaurants, and only a few good ones? Scouring restaurant website menus yielded one solid result: the “penne amatriciana” at Nino’s on West Dallas. A weekday lunch visit revealed a generous portion of the dish that was both delicious and well-made, if not wholly faithful to the original recipe. The amatriciana at Nino’s included onions, making it a closer relative of the Roman version. In a nod to the Americanization of the recipe, pancetta is substituted for guanciale (which can be hard to find in the U.S.), and Parmigiano-Reggiano cheese was offered instead of pecorino.

Still, even if a restaurant in Houston offered a faithful recipe of the dish, it would be difficult to exactly reproduce the version from Amatrice due to the obvious lack of access to the local Italian ingredients: the velvety richness of the rendered guanciale, the salty sharpness of the local pecorino cheese, the tangy sweetness of the Casalino tomatoes that are a hallmark ingredient of the dish in Italy. Certainly, using the original recipe and good quality ingredients, a delicious approximation of the dish is possible outside of Italy. But I’ve resigned myself to the fact that a taste of the real amatriciana is only attainable by a flight to Rome and a drive north on the Via Salaria to Amatrice — the “citta degli spaghetti all’amatriciana.”

1 Response to Spaghetti all’amatriciana: Layers of flavor and history