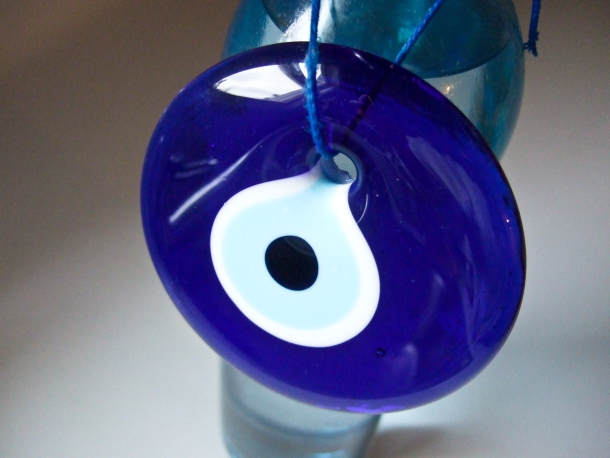 The staff at Istanbul Grill in Houston’s Rice Village wear T-shirts emblazoned with a symbol of concentric blue and white circles. Round glass objects of the same design hang from the walls of the restaurant.

For anyone who has ever visited Turkey, you will recognize these objects as the same ones sold in stalls of Istanbul’s Grand Bazaar, hung from the walls in commercial establishments, and dangled from the rear-view mirrors of taxicabs. This is the nazar boncugu, or the evil eye stone that’s meant to ward off bad spirits. It’s the first and most prominent sign that you are in one of Houston’s relatively few Turkish restaurants.

Just looking at the menu here, you might not be so sure you’re in a Turkish restaurant. Kebabs, hummus, tabouli and baklava are prominently featured — all dishes with a Mediterranean, Middle Eastern or South Asian association, at least to the eyes (and palate) of the Western diner. Undoubtedly, native Turks would vehemently disagree that the kebabs produced in Istanbul are even remotely similar to those made in Tehran, much less London or Berlin. If politics and religion are historically the major sources of international conflict, a nation’s claim to its cuisine, dishes and ingredients can’t be far behind.

In Houston, Turkish cuisine is less well-known than its culinary cousins from Greece, India, Pakistan or Lebanon. Three (out of maybe four or five) of Houston’s Turkish restaurants are located a couple of miles from each other inside the loop — Istanbul Grill and Pasha in Rice Village, and Turquoise Grill just north on Kirby near the Southwest Freeway. Although menu items may seem similar, it’s been my experience that Turkish cuisine in Houston has stayed closer to its roots than Greek or Indo/Pak cuisine, which over the years has ballooned in portion sizes and unsubtle uses of mass-produced ingredients and palate-destroying spices. Much of the Turkish cuisine you get in Houston is simple, fresh and flavorful, and accommodating to both meat lovers and vegetarians alike.

A meal will often begin with a glass of hot tea, or çay (pronounced chai). Drinking tea in Turkey is an important social tradition — outdoor cafes are filled with Turks drinking tea, smoking and socializing, all tended to by waiters darting between tables, carrying impossibly tall stacks of glasses in each hand. On the occasion I’ve stepped in to a Turkish restaurant in Houston for an order to-go, the owner will often bring out a glass of hot tea while I wait — a perfect example of the hospitality for which Turkish people are known. 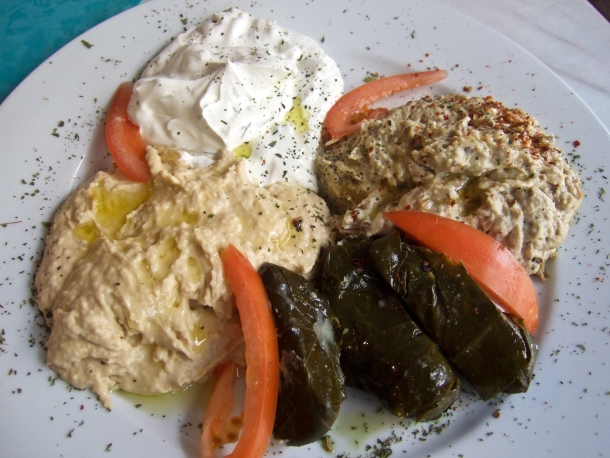 The appetizer course of a Turkish meal, the meze, is usually made up of soups, salads, dips and spreads, and small portions of meat or fish. Most Turkish restaurants offer a meze tabagi, or mixed appetizer plate, which allows you to choose 4-8 dishes to sample. It’s a great way to try the many different options. On a recent visit to Turquoise Grill, we ordered a meze tabagi which included patlican salatasi (baba ghanoush, or cooked and mashed eggplant), hummus (chickpea dip), yaprak sarma (dolma, or stuffed grape leaves), and haydari (lebni, or strained yogurt). This course is served with pide bread, similar to the Greek pita bread, but thicker and fluffier, and often sprinkled with sesame seeds. 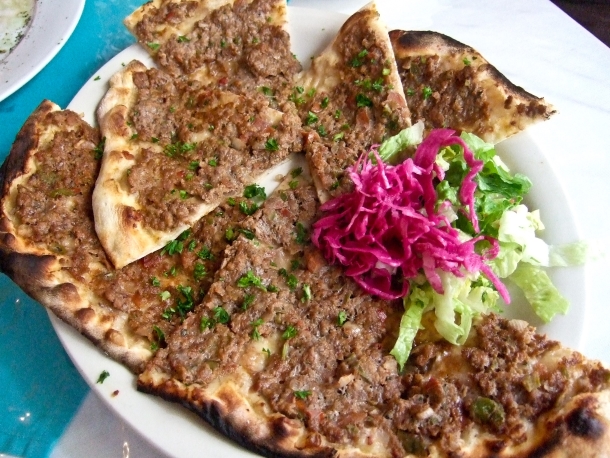 Main courses feature a wealth of fried and grilled meat and seafood dishes, as well as dishes featuring wonderfully grilled and seasoned vegetables that are a godsend for long-suffering vegetarians. The usual beef, chicken and lamb kebabs are here; for a distinctive Turkish version try the Iskender kebab, named after its Turkish inventor, Iskender Efendi. Long, thin slices of doner kebab (lamb) are layered over butter-soaked pieces of pide bread, then topped with a tomato sauce and served with a side of yogurt. Another unique Turkish dish is lahmacun (pronounced lah mah zhoon)— crispy, thin pide bread topped with a paste of minced lamb and beef, onion, tomato, garlic and parsley. A side salad of crispy, vinegary red cabbage and lettuce is spread on top, a squeeze of lemon is added, and the lahmacun is rolled or folded together and eaten by hand. 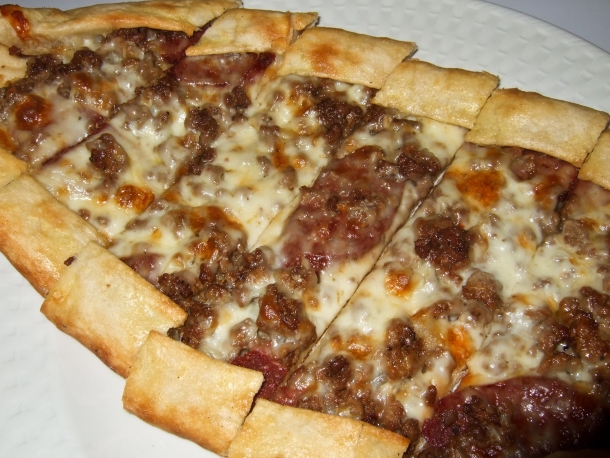 Another type of “Turkish pizza” is known as pide, named after the pide bread that forms the crust of the boat-shaped pizza. Thicker and more substantial than lahmacun, pideler features many types of toppings such as sausage, cheese, beef and lamb. A delicious vegetarian pide features onions, bell peppers, tomatoes, mushrooms and cheese. And in an endearingly diplomatic gesture, many Turkish restaurants will list a “calzone” on the menu, really just a folded-over pide, for timid eaters or kids looking for something familiar. 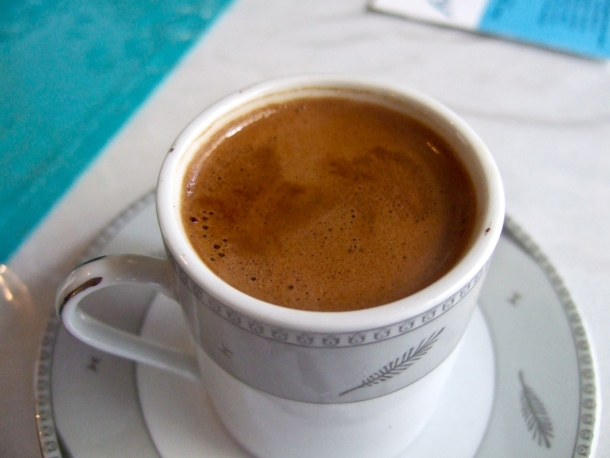 There are the usual sweets for dessert — honey and pistachio-laced baklava, and a more subtle sutlac, or oven baked rice pudding. But the true culmination of any Turkish meal is coffee. Turkish coffee is not distinguished by the ingredients (though it is often infused with sugar or cardamom), but rather by the preparation method. Coffee beans are ground into the finest possible powder, then mixed with hot water until the flavors are extracted and the powder settles on the bottom of the cup. The result is visually murky, with a grainy-thick texture, and with an intensely focused flavor of coffee-caramel-earthiness.

Much like the diverse nation of Turkey, which sits at a geo-political crossroads between Europe and Asia, the cuisine of Turkey is a rich fusion of dishes and ingredients derived from neighboring regions, as well as dishes unique to the country itself. The Turkish restaurants of Houston offer an authentic snapshot of this world-class cuisine and culture that is a fresh, unique and reasonably priced alternative to the city’s usual Mediterranean food offerings.