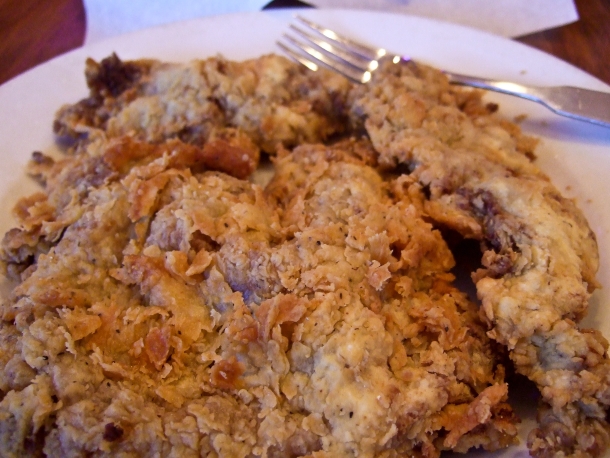 We continue our search for the best chicken-fried steak in Houston by visiting two chain restaurants known for tasty CFS.

Similarly, Saltgrass Steak House started as a private restaurant chain in Houston and was eventually acquired by the Landry’s Restaurant group in 2002. The CFS here is not often mentioned in Houstonians’ or Texans’ lists of great CFS, but it does seem popular with out-of-towners. I’d never eaten at a Saltgrass Steak House and it seemed like a worthy local competitor to the long-storied reputation of the Black-eyed Pea CFS.

On a recent weekday lunch the dining room at the only remaining Black-eyed Pea inside the loop (4211 Bellaire Blvd.) was full. The clientele was older. This isn’t surprising, since the restaurant chain has been around for almost thirty years and the menu features the same “home-style” American comfort foods it has always served. Roast turkey breast, made-from-scratch meat loaf, pot roast, and of course chicken fried steak keep the regulars coming back year after year.

This is a table service restaurant. The dining room is comfortable and well-lit, if a bit the worse for wear, and my servers on this day were friendly and attentive. I noted that the market segment served by the Black-eyed Pea is quite successful — a step up from comfort food cafeterias like Luby’s, but not as fancy or expensive as a slightly more upscale chain like Saltgrass. This is comfort food in a comfortable atmosphere at a comfortable price.

The CFS here comes in two sizes: the regular chicken fried steak ($8.99) and the “Texas sized” chicken fried steak ($10.99). Two vegetables, rolls and cornbread are included. I ordered the Texas size, with side orders of mashed potatoes and steamed broccoli, and the requisite ginormous glass of unsweetened iced tea. 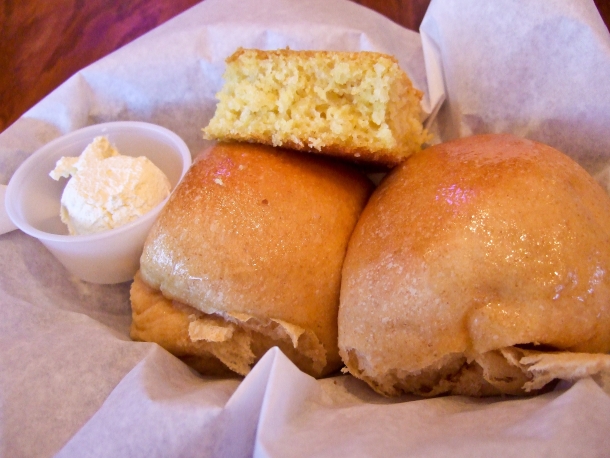 Rolls and cornbread at Black-eyed Pea

Meat: The Texas sized version filled a whole plate, with the meat aggressively tenderized — in some places almost falling apart — with a good thickness and properly seasoned. It was fork tender and contained only a couple of gristly pieces.

Crust: Fried golden brown, with areas that were thinner/thicker and lighter/darker with spots of the underlying meat occasionally peeking through. Nicely seasoned and flavorful. The crust adhered to the meat perfectly.

Gravy: It was average. Thickness and texture were good, with a respectable richness of flavor. Seasoning was light and meant to be inoffensive, I’m sure. Adding a bit of salt and a lot of pepper would greatly improve this gravy.

Value: Very good. For $10.99, the CFS was huge and well-executed and the sides were respectable. The bottomless basket of rolls and cornbread is a nice (and filling) tradition.

Extras: Excellent. The rolls and cornbread may not be like your momma made them, but they are addicting. The rolls are unusually, but not unpleasantly, sweet with a gooey, doughy texture. They come out steaming hot and drenched in butter. The cornbread is similarly sweet and addictive — certainly a crowd-pleaser but probably unacceptable to the purists who believe cornbread should feature a more bitter flavor.

Overall grade: B+ The Pea still makes a mean chicken fried steak. This will come as a relief to those of us who grew up on the CFS here, but don’t get back often.

Salt Grass Steak Houses dot the suburban landscape of Houston. I can never remember exactly where one is, other than it’s usually somewhere along a major highway like I-10 or I-45. The closest one to my house is on I-10 near Shepherd, and that’s where I visited on a recent weekday lunch. This location has a small dining room with clubby, comfortable booths lining the walls. The crowd consisted mainly of urban professionals and office workers. 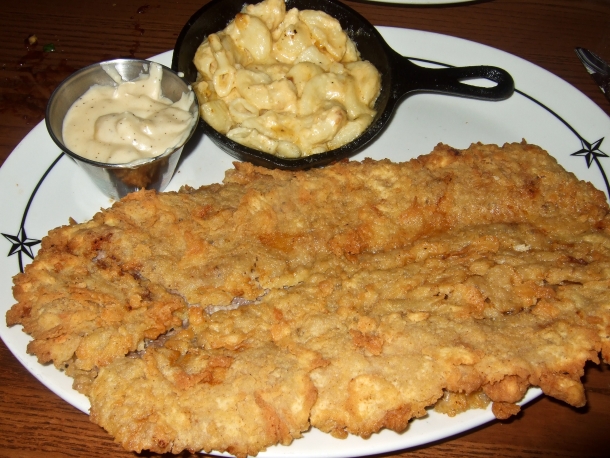 Meat: Nicely tenderized; perhaps too much, as the meat was a bit thin. Good flavor and freshness.

Crust: Flavorful, crispy and well-seasoned, but there was large amount of crust relative to the meat. There was virtually no adhesion of the crust to the meat, a deal-breaker for some.

Gravy: Outstanding, some of the best I’ve had in Houston. Wonderfully creamy texture, great depth and richness of flavor. Good seasoning. I’d even like a bit more pepper in there.

Extras: Poor. The “beer bread” that accompanied our lunch on this day was dry, crumbly and flavorless. The salad was a standard-issue iceberg lettuce concoction.

Overall grade: B. The CFS at Saltgrass is overall pretty good, but somewhat thin relative to other chicken fried steaks in Houston, and the lack of the traditional rolls and cornbread is a drawback in my opinion.

The Black-eyed Pea takes this round. The overall quality and value is excellent. But like any CFS comparison between two restaurants, wishful exchanges of different components is always in order. The Black-eyed Pea rolls and cornbread would greatly improve the experience at Saltgrass. The Saltgrass gravy would push the Black-eyed Pea experience into the A or A- category. Such is the creative thinking of the CFS connoisseur.