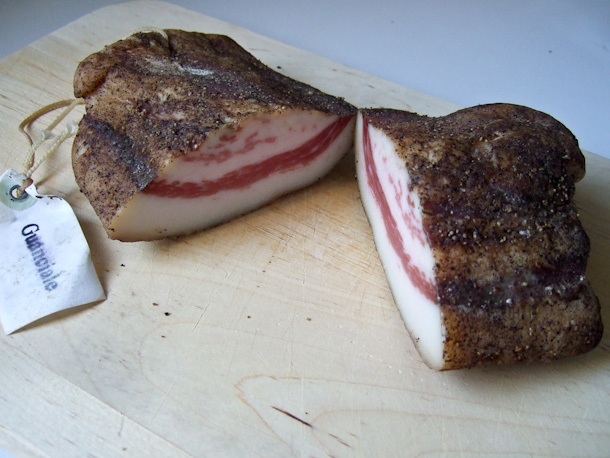 If there’s anything more controversial than the origins of the dish known as pasta alla carbonara, it’s the selection of ingredients that go into it. In the first part of this series, I talked about the history of carbonara and briefly mentioned the many knock-off versions that now populate the Italian food landscape. In the next two blog posts we’ll establish the ingredients needed to make a true carbonara, and in the last part we’ll incorporate those ingredients into a recipe we can all use to make an authentic and delicious carbonara at home.

Over the decades, carbonara has metastasized from a simple, intensely-flavored dish to a meandering hodge-podge of often conflicting ingredients. The argument can be made that the authentic version — a challenging, pungent, and ultimately delicious assault on the palate — has been dumbed down for American tastes. Justifiably or not, the American palate is attuned to fat, salt and sugar. Carbonara has fat and salt in spades, but lacks a sweet balance. Most of the extraneous ingredients you see in bastardized versions — heavy cream, shallots, even white wine — seem to be added to account for the American-palate-tuned dependency on sweetness.

Why has it been dumbed down and bastardized to such an extent? To answer this, let’s consider the traditional ingredients in carbonara: pasta, eggs, Pecorino Romano cheese and guanciale (cured pork jowl). You would think a dish with so few ingredients would be a snap to make, but in reality the opposite is true. With a small number of aggressive, type-A personality ingredients, there’s little room for error. Improper preparation of the traditional carbonara recipe will yield an avalanche of salt worth at least a couple of blood pressure points. An easy fix would be to dump in a cup of heavy cream: it masks any unpleasant saltiness and adds a creamy texture and sweet flavor component. But it doesn’t have to be this way. The key to an original, balanced carbonara recipe is found in probably the most controversial ingredient: guanciale.

Even though most of the purist recipes for carbonara will list guanciale as the cured pork ingredient, they also include a note like “if you can’t get guanciale, pancetta is an acceptable substitute.” Don’t believe it. There’s a big difference between pancetta and guanciale and it makes all the difference in carbonara.

Pancetta and guanciale are both unsmoked cured pork, similar to bacon (which is usually smoked). In the social stratum of cured pork, bacon is the go-to blue collar worker, pancetta is the slightly frumpy and overworked civil servant, and guanciale is the bespoked and refined duke of the manor.

In Italy, guanciale differs by region. Guanciale o barbozzo (“cheek or chin”) originates from Umbria, specifically the medieval hill town of Norcia, an Italian gastro-destination where the pork butchers are known as norcini. The area around the nearby Monti Sibillini is known for its wild boar and free-range pigs that supposedly yield higher quality cheek meat. Goletta o guanciale is made from the flap of meat under the jaw that connects the cheeks.

Guanciale tradizionale di Barbagia originates from the Barbagia region on the island of Sardinia, specifically the areas around the Gennargentu mountain range where the fragrance of the local flora and herbs is said to provide a distinctive and complex flavor to the guanciale as it air dries.

In Houston, guanciale can be procured from various sources, including Central Market (Salumeria Biellese) and Hubbell & Hudson (Niman Ranch). Online sources for guanciale include La Quercia and Salumi Artisan Cured Meats. You’ll notice that all of these sources are domestic to the United States. U.S.D.A. import regulations currently make the import of Italian guanciale cost prohibitive, if not outright illegal.

For the home cook making an authentic carbonara, a good guanciale will impart just enough herby fragrance and subtle sweetness to counteract the saltiness of the cheese, thus alleviating the need to add cream or shallots. And it’s that tangy, salty Pecorino Romano cheese that’s next on the ingredient list.

Some people say that everything tastes better with bacon. Others say that everything tastes better with parmesan cheese. Neither is true for carbonara. We’ve argued that guanciale offers a depth of flavor and complexity that’s lacking in other cured meats like bacon or pancetta. Similarly, in choosing the cheese component for carbonara, the lesser-known Pecorino Romano is preferred the traditional Parmigiano-Reggiano, but for a very different reason.

Parmigiano-Reggiano is known for a nutty, complex depth of flavor that works well in dishes that showcase cheese as the main ingredient. But with carbonara, in which a few simple ingredients perform a delicate balance of flavors, Parmigiano-Reggiano can be muddying. It doesn’t always play well with others. Enter Pecorino Romano.

The word most often used with Pecorino Romano is “sharp,” and indeed it has a much saltier, spicier and more pungent flavor profile than its milder and better-known cousin, Parmigiano-Reggiano. The paste, or interior of the cheese, is crumbly with a straw-white color. All traditional recipes for carbonara call for Pecorino Romano only, and in my opinion that’s not a coincidence. In the Roman puzzle that is carbonara, Pecorino Romano offers a singular and uncompromising flavor component that complements the richness of the guanciale and the nuttiness of the pasta (more on that later).

Pecorino Romano is one of the oldest of all Italian cheeses. Originally produced near Rome over 2000 years ago, the cheese is documented as one of the staple rations of the ancient Roman legionaries. The original recipe and production methods are still used today to create authentic Pecorino Romano cheese. Originally the cheese was only produced around Rome, but due to regulatory and economic factors, much of the production has been exported to the island of Sardinia.

Although most real Pecorino Romano originates from Sardinia, there are four cheesemakers that still produce from Latium (Lazio), the region encompassing Rome. For some connoisseurs, this Pecorino Romano is even more authentic and of a higher quality. Those cheesemakers are Lopez, Fulvi, Locatelli and Brunelli. The name Locatelli often is used interchangeably with Pecorino Romano cheese, however it is actually just a brand name.

Now that we’ve decided on the meat and cheese components for our authentic carbonara, the next installment of Building the Perfect Carbonara will take a look at the component to which our silky carbonara sauce will so lovingly cling: the pasta.

Back: A Roman Puzzle | Next: The Ingredients Part 2