A recipe is a funny thing. Often you’ll follow the instructions exactly and the dish still turns out poorly. It’s like something’s been left out, or gets lost in the translation, and you have to read between the lines to achieve success. A recipe can be a maddening puzzle.

Of course a recipe is just a notation of something far more complex. Much like the notes in a sheet of music, or the dialogue in a screenplay, the ingredients and methods in a recipe are there for our interpretation. Not in the sense that we are obligated to make changes to the original work (although this may be warranted), but rather in the belief that by reading and analyzing the recipe, we are able to understand the author’s true intent.

It is this ability to skillfully interpret and bring to life notations on a page that defines great conductors, great actors, great chefs, and indeed great home cooks.

A recipe that endlessly fascinates me is pasta alla carbonara, or, in its most common form, spaghetti alla carbonara. Carbonara, as I’ll call it, is meaningful to me on both an intellectual and personal level. Intellectually, carbonara is the Occam’s razor of recipes: in my experience, the simplest and most compact recipes produce the most successful results. You can call it what you want — the law of economy, less is more, keep it simple stupid. I call it tasty.

Recipes aside, the idea of carbonara is deviously simple: pasta, eggs, cheese, cured meat, and black pepper. From this limited combination of diverse textures and flavors springs one of the most complex and satisfying dishes you will ever eat. There is some agreement that in its most traditional form, carbonara is made up of the following specific ingredients: spaghetti pasta, eggs, Pecorino Romano cheese, guanciale (cured pork jowl), and fresh cracked pepper.

Which isn’t to say you’ll ever get this version of carbonara in any restaurant outside of Rome. In all likelihood you won’t. What you’ll get is a watered down, bastardized, American-palate-ized version with added ingredients. So what went wrong? The fact is, making an authentic, delicious carbonara is hard. For instance, carbonara is known for its ultra-creamy consistency. Do you have any idea how hard it is to get that consistency by “cooking” an egg in hot pasta just removed from boiling water? (more on this later). Much easier for cooks to just add heavy cream, which is a signature of the American version.

You won’t find cream in the carbonaras made in the neighborhood trattorias and osterias of Rome. This is where I first learned to love carbonara. As an architecture major in college, I’ve spent more time in Rome than any other European city. Rome is easily the most important pilgrimage destination for architecture students, and my classmates and I spent many days in Rome soaking up the culture, food, and architecture, just marinating in it.

The student hotel was the (generously rated) two star Albergo Lunetta located in the Piazza del Paradiso, just a pottery shard’s throw away from the Campo dei Fiori and its kaleidoscope of farmer’s markets, gelato stands, and ristorantes. Anchoring the western edge of the Campo is La Carbonara, a typical Roman restaurant that’s been around since 1912. Ironically not named after the dish (it was named after a shop that sold coal many years ago), it was here that I first tasted carbonara. 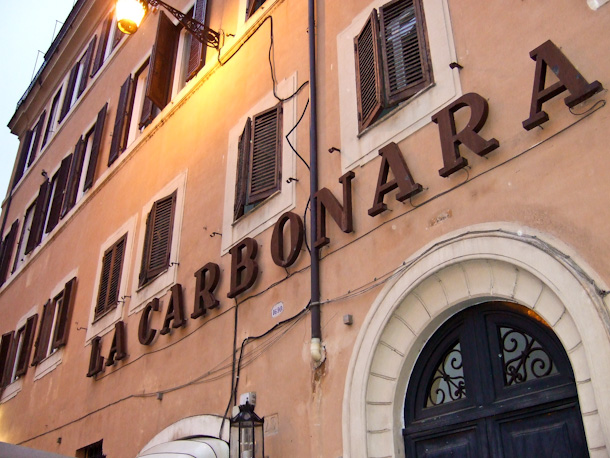 The origins of the dish known as carbonara are in dispute. There is general agreement that it was not documented before 1945. This gives rise to one of the more plausible explanations: American troops residing in Italy after the Second World War combined their rations of bacon and eggs with the pasta and cheese dishes traditionally served in Rome. In fact, cacio e pepe, another traditional Roman dish, is made up only of pasta, Pecorino Romano cheese, and black pepper. Add eggs and cured meat (bacon in this case), and you’ve got carbonara.

Still, this does not explain the distinctive name of the dish which derives from the Italian word for charcoal (carbone). And surely Romans would never allow one of their most prized culinary creations to be attributed to an American occupation. This gives rise to the far more romantic legend that the dish originated with the coal miners of Umbria (Carbonari) who used readily available ingredients and an open coal fire to cook a satisfying and hearty meal. The prevalence of fresh cracked pepper flakes is said to represent the coal dust that would drop from the jackets of the coal miners into the pans as the dish was being cooked. Certainly a worthy legend of a great city purportedly founded by twin brothers raised and suckled by a she-wolf.

Whatever the origins of carbonara, one thing’s for sure: it’s impossible to find an authentic version on a Houston restaurant menu. Almost all versions in Houston use heavy cream in the recipe. Additionally, the cheese is usually parmesan and the cured meat is pancetta. Houston is not lacking in Italian restaurants, but most serve overwrought, complex, and Americanized versions of Italian classics. The one exception to this rule, and the one restaurant in Houston that is closest in spirit to a typical Roman trattoria, is Dolce Vita on Lower Westheimer. Simple, focused dishes of pasta and salad compete with the best thin-crust, wood-oven baked pizza in Houston for a diner’s attention. The carbonara here is made with rigatoni, however you can ask them to make it with spaghetti. Also, ask for extra pepper. The cheese is milder than a typical Pecorino Romano, but the guanciale is excellent. All in all, Houston’s closest approximation to a true carbonara. 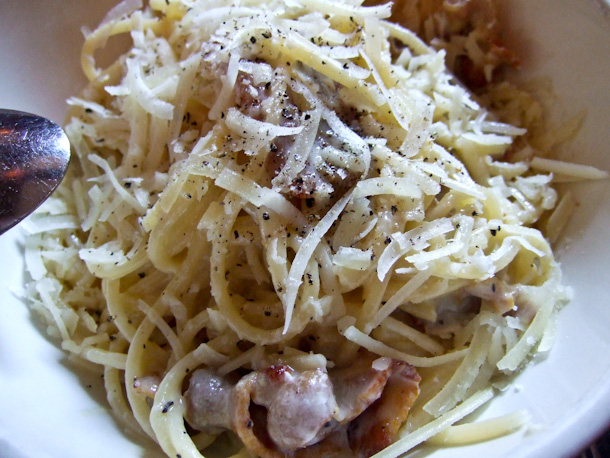 So what’s a carbonara purist to do? If you can find a local chef schooled in the ways of traditional carbonara, you can always ask to have it made by special request. Absent that, if you want carbonara done right, you’ll have to do it yourself. Fortunately in Houston, all of the traditional ingredients, including Pecorino Romano cheese and guanciale, are readily available. The real challenge is to come up with a recipe that best approximates the traditional carbonara that originates in Rome.

To do this, I’ll rely on my own memory of the flavor profiles of the carbonara I tasted in Rome, effectively reverse engineering the dish from memory. I’ll supplement this with my own interpretation of the traditional recipe for carbonara. With these techniques in mind, here is a framework for how to create authentic carbonara.

In the second and third parts of Building the Perfect Carbonara, we’ll consider all the various ingredients that can be used to achieve these effects. In the final installment, we’ll assemble the ingredients into a recipe and nail down the best procedures to achieve our goals.

One point I’d like to make is that I don’t automatically equate “authentic” with “better tasting.” There are many derivative versions of traditional dishes that are superior to the original. But for carbonara, my experience has been that the authentic version is the best version.

Of course the ultimate goal of creating a real carbonara is the same for any recipe: create a dish that is satisfying to the appetite and stimulating to the palate. In this case, we’re looking for a compact flavor profile with intense, complementary flavors. Using only a few ingredients, we want to create a complex depth of flavor and texture. It’s a puzzle with four basic ingredients, whose subtle and complex interactions are capable of creating a truly world-class dish. Ultimately, we want to recreate the essence of a dish that has stoked the imagination and tastes of Romans and visitors to Rome for over half a century.

Next: The Ingredients Part 1