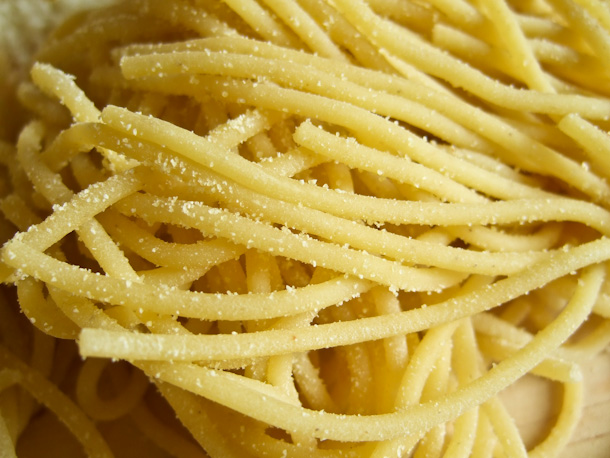 In our last post, we considered two of the most important ingredients of pasta alla carbonara: the cheese and the cured meat. A third ingredient, pasta, is one of the world’s most prevalent foods. It’s readily available in many restaurants and the vast majority of supermarkets and convenience stores worldwide. Such a commodity product must be all the same, right? Wrong. As with any food, there are different types and qualities of pasta. Indeed, it is far more than just a delivery mechanism for the sauce — choosing the right pasta will add a depth of flavor and complexity of texture that is the hallmark of true carbonara.

There’s a widely held belief that fresh pasta is innately better than dried pasta. This is not necessarily true. If anything, the two types of pasta are different, not better or worse. Regardless of type, all pasta is created with two basic ingredients: flour and water.

So which type of pasta is more suited for our carbonara recipe? Unlike the other ingredients we discussed, there is no clear choice. I’ve had carbonara with both fresh and dried and both were delicious. But my preference is with dried pasta. Here’s why.

Dried pasta is made with a specific type of durum wheat flour called semolina. This flour gives dried pasta three distinctive characteristics. First, the taste is typically “wheaty” and “nutty” and adds an extra dimension of flavor to a dish of carbonara. This is in contrast to fresh egg pasta whose flavor, unsurprisingly, is predominately “eggy.” The egg flavor in the pasta combined with the egg-based carbonara sauce is flavorfully redundant — it does not add the complexity of flavor that dried pasta does. 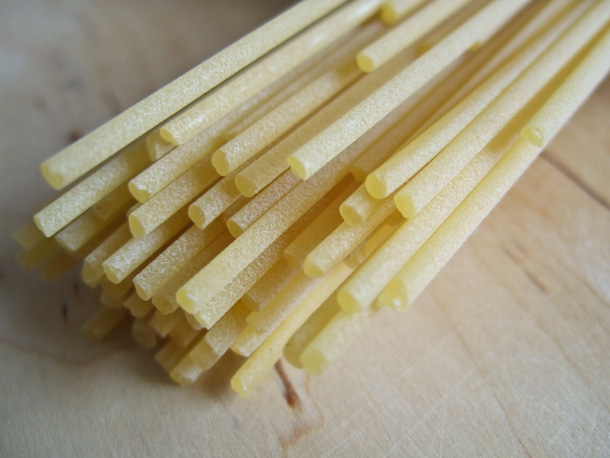 Dried pasta also has a distinctive surface texture. The process of milling semolina yields a coarser flour that, when combined with the process of extruding the pasta through bronze dies, results in a coarser surface of the pasta. A coarser surface texture offers ample opportunity for our carbonara sauce to cling to the pasta. Contrastingly, egg pasta is usually made with all-purpose flour which offers a smoother texture that is better at soaking up pasta sauce, rather than having the sauce cling to it. In my experience, having the carbonara sauce cling to the distinctively-flavored dried pasta, rather than fusing with fresh pasta, is preferable.

Finally, dried pasta offers a firmer texture or “bite” when eating it. This is, of course, the Italian tradition of cooking pasta al dente or “to the tooth.” One of the biggest surprises for Americans visiting Italy for the first time is the “chewiness” of the pasta. In fact this is the way pasta is supposed to be cooked, and the nature of the gluten-rich semolina flour used to make dried pasta offers a firmness and elasticity that is not as pronounced in fresh egg pasta. Ultimately, the firmness of the pasta we eat, whether al dente of softer, is a matter of personal preference. Having eaten in Italy many times, my preference is for al dente pasta, and dried pasta is the best way to achieve this.

In Houston, dried pasta is ubiquitous. Entire aisles of supermarkets are dedicated to multiple brands and types of dried pasta. In general, if you stick with name brands such as Barilla and De Cecco, you’re guaranteed a high quality pasta. In my experience, there’s not a big difference in the taste or texture of most mass-produced pastas, especially after sauce has been added. There is a big difference, however, between mass-produced pasta and artisanal pastas that are available at some high-end supermarkets. One of my favorite artisanal dried pastas is Rustichella d’Abruzzo, which is available at Central Market.

What’s the difference between a mass-produced and artisanal dried pasta? In my experience, the flavor of artisanal pasta is cleaner and more intense, and the texture is firmer (more al dente). The explanation for this difference may be in the ingredient lists for each type of pasta, and the methods of production. Officially, most mass-produced pasta is designated as an “enriched macaroni product.” This means that the method for producing the semolina (like most non-whole grain flours) removes many useful nutrients. The flour used to make mass-produced pasta is thus “enriched,” meaning nutrients are added back into the flour. F.D.A. guidelines recommend the addition of the following ingredients to enriched flour: thiamin, riboflavin, niacin, folic acid, iron and calcium.

Artisanal pastas do not use enriched flour, rather they use flour produced with high-quality durum wheat from specific regions of Italy, and sometimes from the pasta-maker’s own growing fields and heirloom wheat varieties. Also, pure mountain water from rural areas of Italy, rather than the hard, chlorinated water of urban areas, is used to make the pasta. The use of more pure, less processed ingredients in the artisanal pasta is the first explanation for the cleaner and more intense flavor.

Another explanation involves the methods of production, specifically the extrusion process and the drying process. As previously mentioned, the hallmark of a great dried pasta is the coarse surface texture. This surface texture of dried pasta is mainly determined by the “die” through which the pasta dough is extruded. Artisanal pasta-makers (and some mass-produced makers) use bronze dies that have been used by the same family or company for decades and get passed down from generation to generation. Alternatively, the smoother texture of mass-produced pasta is often due to the use of teflon dies that are less expensive and easier to maintain.

Also, mass-produced pasta uses an accelerated drying process involving higher temperatures to dry the pasta. Artisanal pasta is dried slowly, over days, which is said to further concentrate the flavor, retain more nutrients, and result in a more al dente pasta (note that De Cecco, one of the best mass-produced dries pasta makers, insists that it uses the traditional slow-drying method).

Finally, a note on pasta shapes. Carbonara is made with any number of pastas shapes, most frequently with spaghetti, but also with bucatini, penne and rigatoni. The general rule of thumb for matching pasta and sauce is: long pasta for creamy, smoother sauces, and short, tubular shapes for thicker, chunkier sauces. Since our goals for carbonara include a silky-creamy sauce and smaller chunks of guanciale to add a balance of flavor, we’ll go with spaghetti. 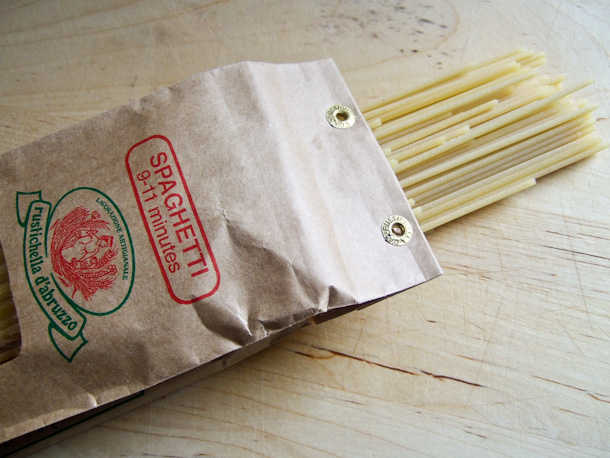 Returning to our original question: which type of pasta is best suited for our carbonara recipe? I recommend dried spaghetti pasta from a reputable Italian producer. De Cecco is a good choice. If you don’t mind paying a slight premium and you like more traditional al dente pasta (and it’s available), go with an artisanal spaghetti pasta like Rustichella d’Abruzzo.

As we’ve seen, the recipe for spaghetti alla carbonara uses only a few ingredients to create one of the most elemental of all pasta dishes. We’ve discussed in detail the triumvirate of main ingredients: cured meat, cheese and pasta. To complete the recipe, we will focus on three more ingredients that may seem like afterthoughts, but actually have a big impact on the finished dish.

Freshly ground black pepper, while often used as a simple seasoning, has a traditional and flavorful role in our recipe for carbonara. A generous measure of black pepper will add a spicy flavor note to the creamy/salty sauce and the rich nuggets of guanciale. Visually, the black specks of pepper are reminiscent of the coal dust traditionally associated with the origins of carbonara. When sourcing black pepper, there’s no reason to get fancy: use high-quality peppercorns and your grinder of choice set to a fine grind.

Some people swear they can tell a difference in the eggs used to make the creamy carbonara sauce. My experience has been that any large, Grade A egg you can buy at a supermarket will do. The fresher the better, obviously. If you prefer the brand name or organic eggs, go for it. But don’t get cute — duck or quail eggs are off limits in this recipe.

Finally, you will be sauteing your guanciale in a small amount of olive oil. Just make sure you use a good quality extra virgin olive oil, because it will infuse flavor, no matter how small, into the guanciale and the fat that it renders.

We’ve seen that the traditional recipe for carbonara uses only a few ingredients, and that the type and quality of those ingredients will make-or-break our interpretation of a true carbonara. How we combine those ingredients to create a flavorful, satisfying, and balanced dish is the subject of the next part in our series: the recipe.

Back: The Ingredients Part 1 | Next: The Recipe