What I most remember about our visit to Saint-Emilion France is how cold and bright it was. We were there in late January when the ubiquitous grape vines join with tourist hotels and curio shops in desolate hibernation. And I did not believe it could be so cold with the sun shining so brightly.

To say that Saint-Emilion is a seasonal town would be an understatement. Fall – when the grapes are harvested, and summer – when the tourists descend upon the south of France – are the busy times. Now, in January, we wandered the steep, medieval alleyways utterly alone.

Stepping into a wine shop – they line every foot of the prime shopping streets – a sleepy caretaker almost falls off his chair with the shock of visitors. The selection is glorious – some of the greatest wines in the world – row-after-row, stack-after-stack, in every vintage imaginable, and at prices that are a fraction of what they cost in American restaurants. 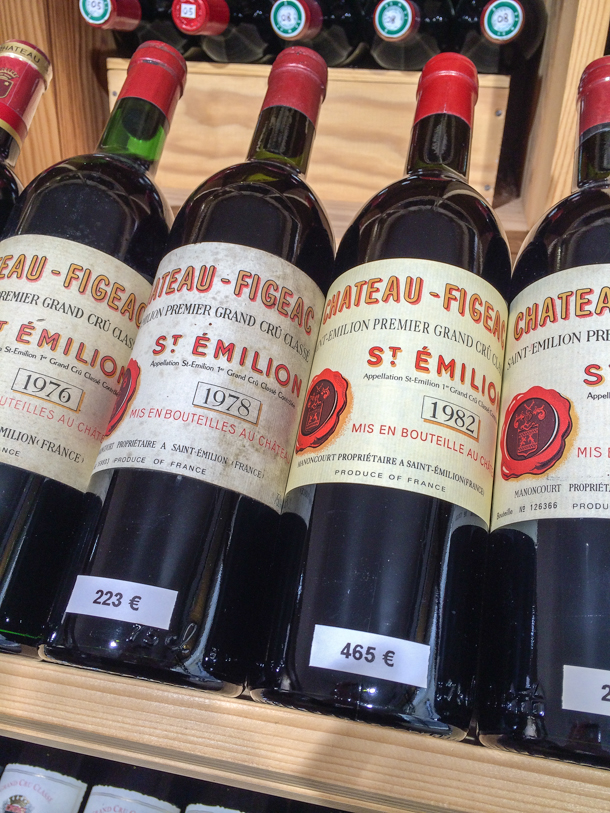 We wandered further, stopping in a tiny cafe – the only one open – where the husband-and-wife proprietors served warm welcomes and croissants and hot caffé lattes.

The Streets of Saint-Emilion

From there we headed for the local tourist office where bored teenagers manned the desk and got a deer-in-the-headlights look as soon as we walked in. The resident English speaker – a couple of years of instruction, I’d say – valiantly, charmingly tried to explain that only a few chateaux might accept visitors that day. He handed us a cheat sheet with names and numbers and we called. One – Chateau Fourney – spoke some English and accepted an appointment for later that afternoon. 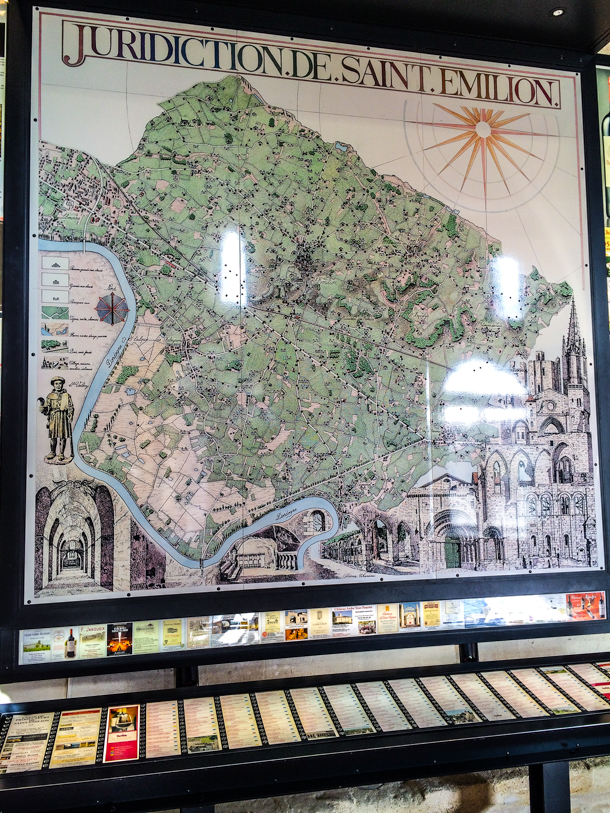 Like a lot of the architecture in Saint-Emilion, the tourist office is located in a structure of blonde limestone walls and floors and big windows. One whole wall was covered with a map of the Saint-Emilion geographic appellation. The chateaux were marked on the map by red LEDs and you pressed a button in a list of chateaux to light them up. It was the French equivalent of oenological whack-a-mole and highly entertaining. 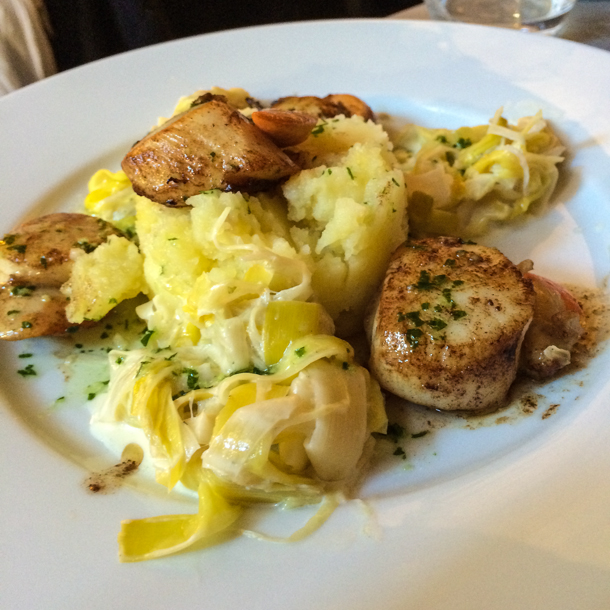 Then we walked all of a hundred yards past ten or so wine shops to our lunch destination: Lard et Bouchon. Only the entry was on the “ground” floor – the bar and restaurant were down a set of stairs in a limestone cave. The manic host/waiter cheerfully recommended dishes and wines. We sat among locals. We ordered the omnipresent foie gras on toast and a scallops dish with mashed potatoes and a creamed bok choy (or equivalent in France). They were both superb – classic French country cooking. 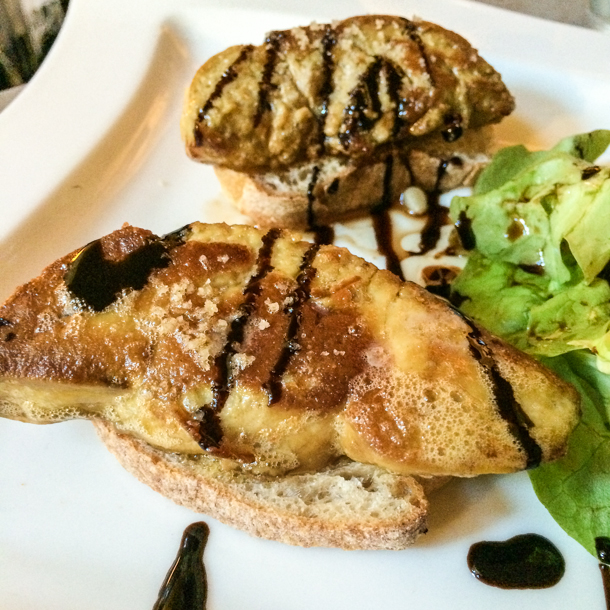 Foie gras is as prevalent in the north of Spain and the south of France as chips-and-salsa is in Houston. Locals don’t think twice about ordering these colossal slabs of foie gras that would be unheard of in the U.S. It is part of the culture here; the culture wars over foie gras in America seem far, far away. 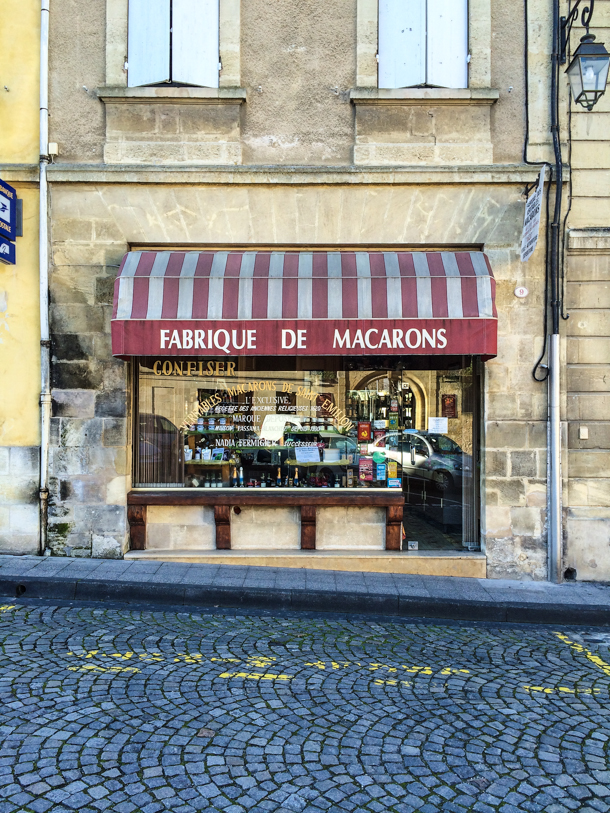 Saint-Emilion is also know for its macarons, and a quick walk after lunch resulted in a visit to an open shop and the acquisition of presents for friends and family.

On our way back to the car, we stopped by the Maison du Vin de Saint-Emilion, which is the local institution that promotes the Saint-Emilion appellation. Here, among an excellent selection of wines, is the “table of aromas” that distinguish Saint-Emilion wines.

The goal is to lift the little door and take a sniff, as though you were poking your nose into a glass of wine. Then you press a button corresponding to the aroma. Is it clove, nutmeg, or pepper? It was actually quite instructive, and all very French.

Finally, we were in the car and rambling through the back roads of Saint-Emilion to Chateau Fourney. The GPS struggled mightily with the obscure coordinate format with which we were supplied, but we pulled up to a chateau and were met by a collie-retriever mix whose friendliness and eagerness-to-please reminded me of Dug from the movie Up.

This was Chateau Fourney, a component of the Vignobles Rollet group of wineries (still family-owned, all grand crus). We were met by the business manager, who gave us the standard tour of the fermentation vats and aging barrels. Old-school concrete fermentation vats were a first for me, and particularly fascinating. In the tasting room, he opened three bottles of wine for us to taste and spoke frankly about the challenges of contemporary wine-making.

As foreign (Chinese) buyers scoop up chateaux for purposes of status or finance, the skyrocketing land values prop up the often-money-losing act of turning grapes into wine. Not exactly a sustainable business model. We bought three bottles.

In the business office we met the daughter of the family patriarch. She speaks fluent English, wears knee-high boots covered in the clay and limestone of her vineyards’ terroir, and generally oversees the group of chateaux her father cobbled together over the past fifty years. She seemed both humored and impressed that a couple of Americans had taken the time to visit her chateau on a cold, bright day in late January.