Meatopia & Sipping from the Spring at Broken Arrow Ranch 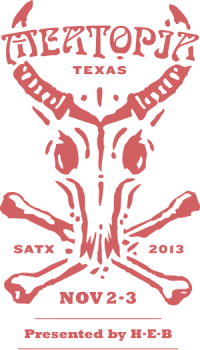 “What’s one piece of advice you’d give about hosting a meat-centric festival in Texas?,” I imagine someone asking me. “Just don’t schedule it on the same day as the Texas Monthly Barbecue Festival,” I’d reply. As someone with a long history of attending meat-centric festivals in Texas, and more recently of organizing them, my only real recommendation is don’t hold it on the same day as Texas’ premier barbecue/meat extravaganza. Oh, and for the love of g– don’t hold it anytime between June and September (well maybe the end of September is OK).

So when New York food writer and meat-centric festival organizer Josh Ozersky announced last week that he scheduled his first Meatopia event in Texas on the same day as the Texas Monthly Barbecue Festival, I thought, “That’s a dumb thing to do.” Or maybe not. Conspiracy theorists might suggest this was a shot-across-the-bow of the established TMBBQ festival, considering Ozersky espouses the “New Barbecue” vs. the “old,” “stale,” barbecue of (presumably) traditional BBQ joints in Texas and beyond.

But the festival organizer in me realizes that sometimes there’s only one good date to schedule an event in Texas – especially in the fall when festivals are everywhere and you have to schedule around your favorite football teams, be it college, pro, or – for the people of Odessa – high school.

Ozersky notes that Texas is big enough for two meat extravaganzas on the same day, and he’s right. TMBBQ will sell out in hours like it always does, Meatopia or no Meatopia. Also important to note that Meatopia is held over two days, so ambitious meatheads can make it to the Meatopia dinner on Saturday night in San Antonio and then head over to TMBBQ festival in Austin on Sunday, if they are so inclined.

On a less-than-positive note, Meatopia features a stellar lineup of chefs and I can’t shake the feeling they’re getting shortchanged because a lot of the people who would most appreciate their effort will be in Austin that day. And of course there are a lot of stellar chefs and pitmasters who would love to be at both events, but had to choose between the two (Aaron Franklin is a regular at other Meatopia events, but I’m guessing it was a no-brainer for him to attend TMBBQ).

All that said, I wish Ozersky only the best in this first Meatopia Texas event. He does seem to understand the sanctity of holding a meat-centric event in Texas. Not long after his press conference to announce Meatopia, Ozersky was pictured “sipping from the spring at Broken Arrow Ranch” (click the Instagram link below to see the pic).

Although I am familiar with Broken Arrow Ranch – it’s well-known among Houston chefs as a source of top-quality wild game meat – I’d never heard of sipping from the spring there. I checked with a couple of Texas food writers who would know about such things and they’d never heard of it either. So I re-tweeted it hoping for some response, and I got it courtesy of Andrew Zimmern:

@houston_foodie @MeatopiaTX @OzerskyTV Many of us have sipped from same spot. Meat lovers Blarney Stone

So there you have it, sipping from the Spring at Broken Arrow Ranch is the Blarney Stone of meat lovers. Which is good with me – I’m a meat lover and I love traditions and I love Texas and next time I’m around Kerrville I’ll probably drop in and take my sip.