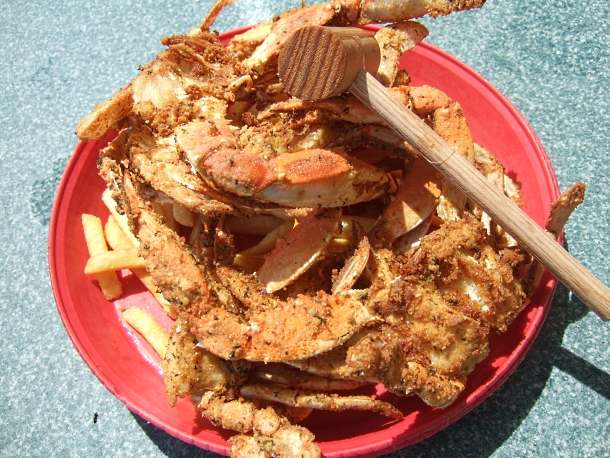 “There’s just nothing coming up out of the water,” explained Tracy Deltz, owner of Benno’s in Galveston, when I asked why he’s had trouble keeping crabs on the menu this summer. It’s a refrain I’ve heard a lot lately – there’s a historic shortage of blue crabs on the Texas Gulf Coast. Other’s have noticed too. At least one reader of the Houston Chronicle seems to have assumed that Benno’s has gotten out of the crab business entirely (not true of course).

@Syd_Kearney Called Benno's. Said they were just out of them right now. No plans to discontinue permanently.

Robb Walsh recently wrote a great piece about how Texas blue crabs have all-but-vanished from Houston restaurant menus. Most Houston restaurants go through wholesalers to get their seafood, and the local crabs most likely to be supplied to Texas wholesalers are instead being shipped east to Maryland where they fetch top dollar. Walsh claims that “…nearly all of the more than three million pounds worth of crab harvested annually in Texas goes to Maryland,” (that seems like a lot!) but also notes that “Old-time barbecue crab shacks on the coast and restaurants that have long-standing arrangements with crabbers might get some local crab…”

So I made a few calls to a few of Texas’ best-known crab shacks to see how things are faring on the front lines. The news isn’t good.

I called Benno’s. I’ve referred to Benno’s as the gold-standard for crab lovers in Southeast Texas. Nowhere else in my experience has larger, meatier, and better-quality crabs on the Texas Gulf Coast. But high standards have drawbacks, and when Deltz can’t get the best product, he doesn’t supplement it with lower quality or imported crabs. He just leaves crab off the menu.

The quality of Deltz’s product originates from longstanding relationships with local (Galveston Bay) crab fishermen. “One of my guys who we’ve been working with since we opened is only going out two days a week now. He’s just not catching anything and what he does catch barely pays for fuel,” said Deltz. A recent week was typical – Deltz got a call from a supplier on Thursday saying he’d have three hundred pounds for him on Friday. That would mostly sell out over the weekend, and Deltz would have to wait until the end of the next week to find out if he’d have more for that weekend.

I asked Deltz about crabs going to Maryland. He’d heard of that happening, but didn’t think his suppliers shipped any of their catch out of state. In fact, every restaurant I talked to, when asked about the Maryland connection, had just about the same answer – they had heard it was happening but didn’t think their suppliers did it. On the other hand, if you are a crab fisherman on the Gulf Coast with longstanding relationships with retailers here, you’re probably not going to admit to shipping your best product to Maryland. My sense is that for the most part, the fishermen working with the crab shacks are keeping most if not all of their catch in-state.

Another common refrain I heard about the lack of crabs was the fuzzy response that “the water’s too hot.” I’ve not found any definitive scientific reason why slightly hotter water would suppress crab breeding, so this may just be an old wive’s tale trotted out by fishermen trying to explain why they’re not catching any crabs. Whatever the case may be, I heard this explanation a lot.

Next, I called Brad Vratis, owner of the Stingaree Restaurant and Marina on the Galveston Bay-side of the Bolivar Peninsula. “It sucks,” was his general response to the crab situation. Vratis also buys from local crab fishermen and the crab supply has not been flowing this summer. “I may look into buying from Sabine Lake,” he said.

So I contacted Kim Tucker at Sartin’s in Nederland who is well-known for sourcing her crabs from Sabine Lake. The Sartin’s name is, of course, synonymous with Gulf Coast crab shacks. Tucker was once married to a son of the Sartin family, and still owns the branch in Nederland. The original Sartin’s in Sabine Pass became famous for popularizing all-you-can-eat barbecue crabs. Starting back in the 1950s, there were so many crabs available on the Gulf Coast that you could get “platter service” where unlimited tray-after-tray of blue crabs could be had for a mere pittance.

Tucker still sources her crabs from Sabine Lake, and seems to have had slightly more luck than her other crab shack counterparts. Supply has been relatively steady, if expensive. She’s paid anywhere from $14 to $20 per dozen recently. Still, her clientele is willing to pay, even though the days of all-you-can-eat crab are long-gone. She did try to expand her sourcing to Louisiana, but she gave up when the product didn’t meet her expectations. “We’d mostly get what they call gumbo crabs,” said Tucker, referring to small crabs mostly used for filler in gumbo.

And if the crab-tastrophe wasn’t bad enough for Gulf Coast seafood lovers, Tucker noted that she sees even bigger trouble coming in the form of a shrimp shortage. In fact, the only reason she has a steady supply of shrimp is because of her longstanding relationships with local wholesalers.

One of those wholesalers is Trudy Verdine at Fisherman’s Reef Shrimp Company in Beaumont. Verdine explained that since supplies of imported Chinese and Vietnamese shrimp have become tight (due to various reasons – disease wiping out the supply, government tariffs making it harder to import), restaurants have contacted her for her domestic supply. She tries to accommodate everyone, but she has to service her longstanding customers first.

But even the domestic supply is getting tight and more expensive. Verdine explained that local shrimpers are saying that the shrimp are “spread out” and that the boats have to go further to catch a complete load, costing more in fuel and other expenses. She says it’s now taking three boats to catch the same amount of shrimp that one boat would catch not long ago. Prices for 16/20 shrimp – not long ago at $5/lb – are now going for $9/lb. “I haven’t seen prices like that since the early 1980s,” said Verdine.

Interestingly, Verdine noted that during the 1980s price spike, restaurants naturally responded by raising menu prices. But when prices eventually came back down, instead of lowering prices, restaurants just substituted larger shrimp that were then more affordable. Which created an expectation for large shrimp among Gulf Coast seafood lovers. Thus, with the current price spike, it will be harder for the restaurants to swap-in smaller, less expensive shrimp without alienating customers. In order to keep big shrimp on the plate, menu prices are thus destined to rise.

So, at least at the seafood shacks along the upper Texas Gulf Coast, the product will generally be available, it will be domestic and still of good quality, but it will be more expensive. When I asked Verdine how she thought seafood lovers might respond, she said pre-emptively, “Don’t be mad at us!”, speaking for everyone in the Gulf Coast seafood industry. For now at least, there’s a perfect storm of reasons conspiring to make seafood lovers pay a bit more for their romance.