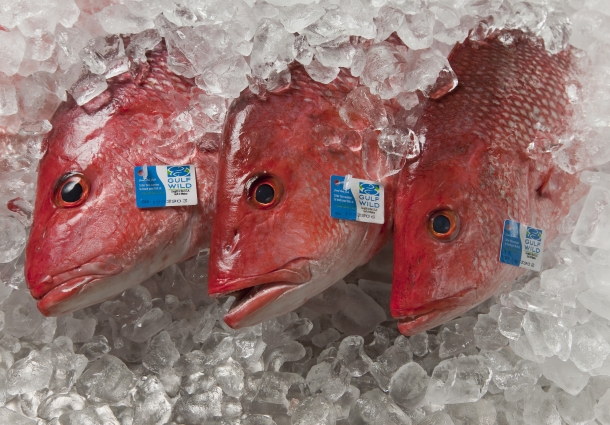 Can you taste the difference between red snapper and tilapia? For the average diner, probably not. And given the traditionally exotic preparations of some seafood dishes in Southeast Texas and Southwest Louisiana – snapper pontchartrain, blackened catfish opelousas, any fish drenched in butter and lump crab meat – the often subtle flavor of the actual fish can be lost.

Which brings up the question: how do I know that the red snapper I get at my local seafood joint is actually red snapper? Until recently, there was no way to be absolutely sure. Of course, you can choose to patronize only those restaurants you trust. If you are familiar with different types of fish, you can ask to see the fish before it is filleted/prepared. And in some cases, usually when prepared simply by grilling or in raw form as sushi, you can decisively taste and confirm.

Why does this matter? Do restaurants really have an incentive to swap different kinds of fish for what is listed on the menu, thus deceiving the customer? Unfortunately, the answer is yes. Recent studies by the organization Oceana, the Boston Globe newspaper and Consumer Reports magazine have confirmed a growing trend of mislabeling fish. The Globe investigation was particularly worrying – of 183 samples of fish taken from Massachusetts restaurants, grocery stores and fish markets, 87 samples (48 percent) were incorrectly labeled (identification was done through DNA testing). Stunningly, of the 26 samples labeled as red snapper, 24 were actually different species of fish.

The mislabeling of fish can occur for many reasons, some harmless and some nefarious. Sometimes it’s an honest mistake – a distributor sends the wrong fish to a restaurant and the chef doesn’t notice. But more and more, due to economic conditions, restaurants are actually serving less expensive fish in place of more expensive fish listed on the menu, and pocketing the difference. In the vast majority of cases, the consumer never knows the difference. This is harmful for several reasons.

First and foremost, it’s a food safety and human health issue. For example, in the Globe report, a less expensive fish known as escolar was surreptitiously substituted for the more sought-after white tuna. Escolar, for some people and in large portions, is known to cause serious gastrointestinal problems. Similarly, for those people who eat fish as their main source of nutrition and protein, some less expensive fish species will not provide the nutrition needed to maintain optimal health.

Another problem with the mislabeling of fish is simple economics. Consider those fishermen who spend an immense amount of time and money to catch real, wild red snapper. To survive, they must sell the fish at a certain price. If less expensive, mislabeled fish is sold at a lower price, they are undercut and can’t sell their catch. Obviously, this has a significant economic impact for the individual fisherman. And for those areas where fishing is big business (like the Gulf Coast), it can have a serious impact on a regional level too.

Finally, mislabeling of fish is an issue of reputation (known as the “brand” by advertising folks). The “brand” known as Gulf red snapper enjoys a reputation as one of the most sought-after fish in restaurants due to its delicious gastronomic properties. If a diner goes to a restaurant and orders Gulf red snapper, but unbeknownst to them gets a previously frozen, mushy, muddy fillet of farm-raised Chinese tilapia, the opinion of that diner toward Gulf red snapper will be diminished. The reputation – the brand – is damaged (not to mention the sense of pride that fishermen have in their catch as well as the pride chefs have in cooking it). Demand is lowered along with reputation, with all the associated (negative) economic consequences.

I’m not aware of any formal investigation into the mislabeling of fish on the Gulf Coast. But surely it must occur. Others along the Gulf Coast seafood supply chain, from fishermen to distributors to restaurants, have also recognized the potential for problems. In response, the Gulf Wild initiative was created. Gulf Wild is an organization (and a brand) that guarantees the identity, quality, sustainability and safety of the fish that it markets. It was created as an initiative of the Gulf of Mexico Reef Fish Shareholders’ Alliance – an organization supporting Gulf Coast fishermen participating in the “catch share” program (a type of quota to prevent overfishing) that was implemented, in part, to ensure the sustainability of fisheries along the Gulf Coast.

The Gulf Wild system is “end-to-end.” As soon as a fish is caught, a “gill tag” with a unique identification number is attached to the fish. Back in port, the numbers are entered into a database along with details of the catch like the name of the fisherman and where it was caught. When the fish reaches a market or restaurant, a consumer can review the tag, type the number into the Gulf Wild website, and get the details about the exact provenance of that fish. In addition to tracking functions, Gulf Wild will also audit participating fishermen to make sure they are following procedures and regularly spot-test fish for contaminants.

In Texas, fish guaranteed by the Gulf Wild brand will soon be available in all Central Market seafood departments. In collaboration with one of Texas’ largest and most respected seafood distributors, Louisiana Foods, Central Market has made the commitment to offer Gulf Wild products to its customers. Undoubtedly, the price of Gulf Wild fish will carry a premium over non-guaranteed fish. Will customers buy into it? Considering the immense value that guaranteed seafood adds in terms of health, economics and the reputation of Gulf Coast products, it seems like this would be a small extra price to pay.