Back in the day, Ruggles Grill was big. Big food with big flavor served in big portions to big people with big hair who drove big cars and lived in big houses. 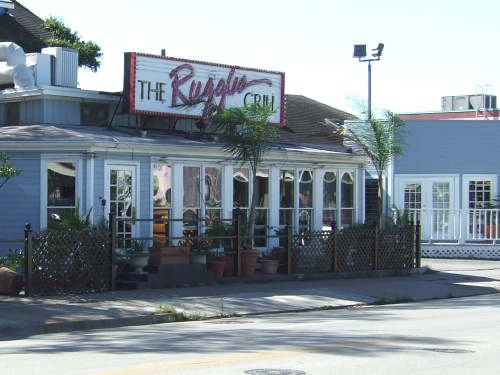 It was richly rewarded with accolades ranging from “best restaurant” to “most popular restaurant.” It became a Montrose institution.

Then the eighties and nineties turned in to the oughties and new restaurants popped up all over lower Westheimer. Ruggles’ big, meandering menu looked unfocused compared to restaurants like nearby Da Marco or Dolce Vita, which brought clarity and focus to a specific cuisine, in this case Italian. But Ruggles still did a good business, even with the calcified menu, until a big storm called Ike put the kibosh on the martini-and-mimosa-fueled party.

Damaged by Ike, Ruggles remained closed for more than a year after the storm, even as other restaurants celebrated grand re-openings. Insurance and city permit problems contributed to the delay, and surely the bad economy didn’t help. Riding out the storm, both literally and economically, seemed a wise strategy for many restaurateurs.

Fast forward to New Years Eve 2009. I was driving by Ruggles Grill and saw a banner draped across the front that announced it would reopen that night. Reservations were being taken. The reopening of Ruggles Grill was imminent. I checked the restaurant’s website and found the same pre-Ike menus. This was disappointing, but curiosity led me to visit the restaurant the following week.

The first thing you notice is that the dining room is basically the same, but spruced up a bit. The main room to the left of the entrance is still where all the action is, with a small bar in the far corner and the hustle and bustle of Westheimer a few feet away through the French doors along the front. But that’s where the similarities to the pre-Ike Ruggles end. The menu is a different story.

The new menu at Ruggles Grill retains some of the highlights of the old menu but with a lot of tweaks and a strong push for organic and locally sourced ingredients. Local vendors listed include a who’s who of local farms: Gundermann, Georgia’s, and Hatterman, to name a few. The dishes are far from minimal, and retain a Southwestern feel with lots of peppers and chiles and chipotles spread throughout. All of the dishes we sampled were fresh and well-executed. 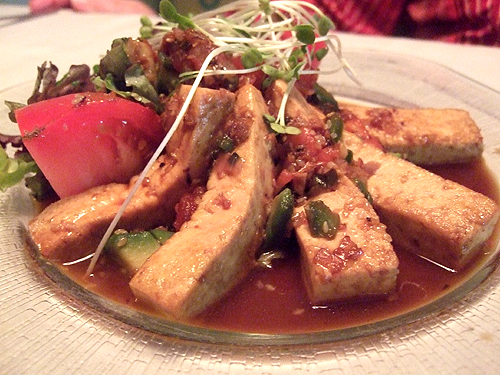 One of the more successful dishes of the visit was the organic tofu and Gundermann Farms tomato salad with Animal Farm mixed greens, dried blueberries, and organic shoa mai vinaigrette. Yes, it’s a vegetarian dish, but Ruggle’s philosophy of throwing lots of ingredients and flavors at a dish works well in this case. Yes, it’s swimming in some kind of crazy vinaigrette, but the flavors are bright and well-balanced. Vegetarians, forever the red-headed stepchildren of fine dining, finally have a dish they can sink their teeth into. As someone who is as far removed from vegetarianism as you can get, I’d actually order this as a starter. 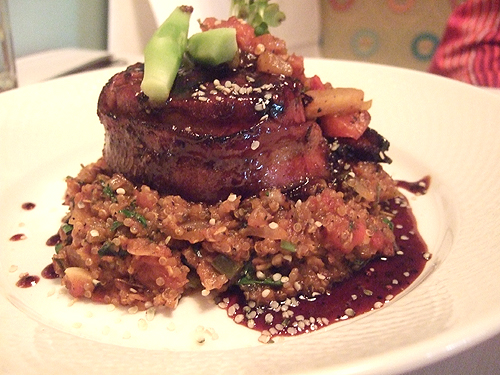 A less successful dish was the grass-fed, bacon-wrapped filet with passion fruit demi-sauce and spicy roasted pineapple organic fair trade quinoa salsa (it’s a mouthful to say and to eat). There’s something cheeky about pairing a thick cut of grass-fed tenderloin with quinoa, a couscous-like grain that’s a trendy ingredient for the rabbit food crowd. It could work, but the dish also includes a roasted pineapple salsa whose plethora of ingredients detonate like a cluster bomb on the unsuspecting palate. This was the embodiment of an overwrought dish. Editing the ingredients and components would be welcome.

It’s obvious that Chef Molzan has created a clever fusion between ingredients and dishes from the previous incarnation of Ruggles Grill and the organic/local/green lessons he’s learned from the success of Ruggles Green. The question is, if you re-build it, will they come? It’s quite possible that the River Oaks crowd will make the trek down Westheimer to get a taste of Ruggles past and present, and to see and be seen. And the vegetarians and Green Party voters who inhabit the surrounding Montrose neighborhood will walk or drive over in their Smart cars to feel that they’ve eaten well and responsibly. If these two constituencies can be reliably satisfied, Ruggles Grill may have a new life after all.