Looking for Tacos in All the Wrong Places

Baytown’s not Pasadena. Pasadena’s known for Gilley’s and Bud and Sissy and oil refineries, and even stakes a claim to culinary celebrity with world’s largest strawberry shortcake. 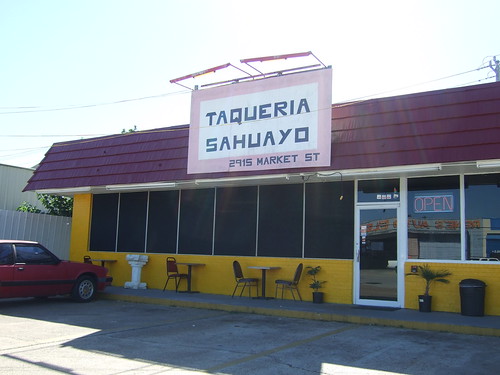 Baytown’s got the refineries and suburbs and a giant shopping mall right off I-10, but it lacks whatever faded patina of glamour that Hollywood bestowed upon its neighbor many years ago. And when you think of food destinations in and around Houston, Baytown never gets mentioned. That’s why I had to go there. There’s an old traveler’s trick I use when searching out interesting places or people. I ask a local resident where a tourist should never go, and then that’s where I go. This inevitably results in the most interesting experiences. Many years ago, on the advice of a Frenchman, I stumbled into eastern Europe and spent a week in Belgrade, (then) Yugoslavia, at the start of that country’s civil war. That was memorable. Turns out that responses for where tourists should never go often involve war-torn countries.

This technique also works for food exploring: ask someone from Houston where they would never go to eat good food, and Baytown usually gets the nod. The problem is trying to get anyone to go with you; even the most hardened food explorers shy away from Baytown. You have to get creative to find a dining companion.

So I convinced my friend and fellow 29-95 blogger Jay (GunsandTacos) into joining me by telling him that Chamillionaire was giving a free Saturday morning concert at the Baytown Masonic Lodge, complete with a bricklaying exhibition and a BBQ and haggis potluck. He was initially skeptical, doubting I could ever be admitted to such an august group like the Masons, and suggesting that the Baytown Masons’ musical tastes probably skew more toward Chingo Bling anyway. So I made up a few secret handshakes on the fly and showed him how they worked. He was impressed and liked them a lot, maybe too much, giggling and shaking hands with himself most of the rest of the day when he wasn’t holding a taco. Anyway, he was on board. 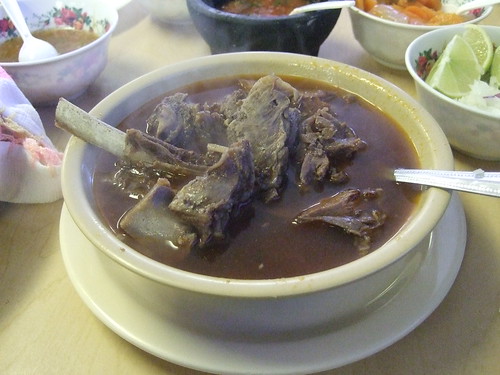 Our first stop was Taqueria Sahuayo in an old part of Baytown that butts up against the mammoth ExxonMobil oil refinery. It’s in an old Dairy Queen building, with a hand painted sign and blacked-out windows. Most people think that establishments with blacked-out windows are places where you should never go. Indeed, in my experience, such places yield great reward or great punishment. Nothing in between.

Among the smorgasbord of inexpensive tacos, caldos, and menudos that we ordered was one of the best dishes I’ve eaten in a long time: birria de cabrito (goat stew). Birria doesn’t have anything to do with beer; rather, it’s a traditional Mexican meat stew. There are generally two preparation styles: “guisada” or “tatemada.” Guisada style involves tossing chiles, aromatics and meat into a pot and slow cooking it until the flavors combine into a traditional stew-like dish.

Tatemada style involves adding chiles and aromatics (and sometimes offal) to a vat of water, then the meat is suspended in a rack over the water and is steamed as the pot is heated. Juices from the meat drip into the broth below. The meat is removed and then cooked a second time — grilled or roasted. The broth is strained and poured into a bowl and big chunks of (bone-in) meat are added to the broth.

The birria de cabrito at Taqueria Sahuayo is tatemada style. The broth (consomé de birria) is brought to your table in a giant steaming bowl and has a wonderful clarity of flavor marked by an intensely meaty (but not too gamey) essence and a restrained amount of seasoning. The chunks of meat range from chewy to falling-off-the-bone. Grab a homemade tortilla, spoon in some meat (it’s OK if you accidentally-on-purpose drip some broth on there), add onions, cilantro and lime juice, then dredge the lot of it in the broth and take a bite. Once you’ve shredded the last piece of meat off the bones, mix some onions and cilantro into the liquid and drink the broth right out of the bowl. It’s one of the most rewarding cold weather dishes I’ve ever had. 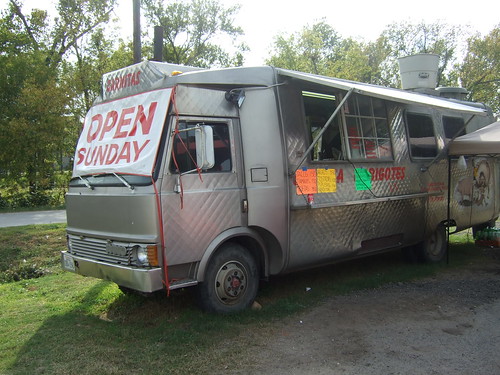 On our way back to Houston, Jay and I decided to explore closer to town and exited at Freeport Street, just inside the Beltway. This was a shot in the dark; no one had ever mentioned this street to me as a food destination. It paid off. Block after block of taco trucks, carnicerias and elotes stands. We stopped at the Bigotes (“mustache”) taco truck in the parking lot of E.J.’s Tire Shop at the corner of Freeport and McNair Streets.

As we studied the menu, a Hispanic gentleman sidled up to me and said something I thought was “sabado” or “sebadoh.” The “sabado” made sense because it was Saturday, but I wasn’t sure why he was asking about Sebadoh, one of my favorite indie rock bands. Jay stepped in and clarified that the gentlemen was actually saying “Salvador,” which is the type of food made by this truck. Jay introduced himself to the gentleman and shook his hand, at which point the man got a funny look on his face and walked away quickly. 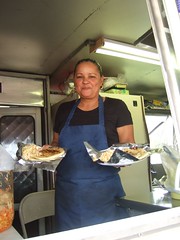 Pupusas are the calling card of any good Salvadoran street food vendor, and this truck specialized in it. Pupusas are thick corn tortillas stuffed with various fillings. I ordered a queso y chicharrón pupusa filled with cheese and finely chopped pork. It came out so hot I couldn’t touch it, so I sprinkled on some curtido (pickled cabbage, onions and carrots) and tomato sauce. I took a bite. The savory, fatty pork combined with the pungent, chalky cheese and the sweet corn and tomato sauce, mixing with the vinegary curtido, was a symphonic taste experience. I ordered a couple of pupusas to-go for reheating later. 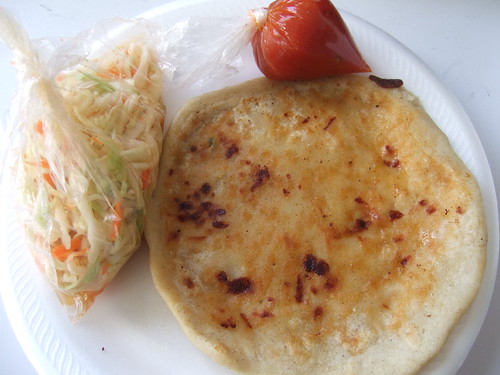 On our way back to town we passed a flea market just off of I-10 and decided to stop in. The front half of the barn-like building was an actual Mexican flea market, the rear half was occupied by a dance club, complete with disco ball, throbbing music and a long bar packed with folks with nothing better to do on a Saturday afternoon. One surmises that if a metal detector were installed at the door, it would be a different crowd, or no crowd. Gringos who show up here, according to Jay, are either la migra or la policía. “It’s a place you should never go,” he whispered as he grabbed my sleeve and dragged me out to the parking lot. I really wish he hadn’t said that.

1 Response to Looking for Tacos in All the Wrong Places