The New Yorker Food Issue is out and Texas BBQ is front and center. 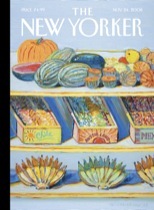 The New Yorker dispatched none other than the esteemed Calvin Trillin to report first hand on Texas Monthly’s BBQ issue. It’s an interesting read, although I get a bit nervous when New York or Hollywood types start sniffing around Texas institutions. Heck, half of the Hill Country is now
owned by Hollywood folks (thanks for nothing McConaughey!). Fortunately, all the New York hedge fund managers are going bankrupt so even if they did decide to dabble in Texas BBQ they probably don’t have the coin to do so. But I can see the headlines now: “Disgraced New York hedge fund manager used embezzled bailout money to buy up top 5 Texas BBQ joints.”

Update 12/11/08: Food fight! Robb Walsh calls into question the BBQ bona fides of both Trillin (“…a Kansas City barbecue fan”) and Texas Monthly (“…a magazine run by a vegetarian from Queens”). Oh SNAP! The NY Times wisely withholds judgement on Texas BBQ but throws gasoline on the (mesquite) fire with a mention in the Diner’s Journal blog.