There are many unexplainable phenomena in our world — UFOs, Bigfoot, Carrot Top. But perhaps none more unexplainable than that culinary equivalent of a Jerry Springer show — McDonald’s McRib sandwich.

The McRib sandwich has a long and storied fast food history. It originally test-marketed well in the Midwest, bombed in its national rollout, was taken off the market, and then returned to the market under the guise of no-less than 3 separate “Farewell Tours.” Well it’s back, as a national TV advertising campaign has made so perfectly clear.

The McRib inspires passionate acclaim from its supporters (here, here and here) and virulent criticism from its detractors. I suppose that provides some explanation for its yo-yo marketing campaign. A visit to www.mcrib.com website provides further clues as to this current marketing campaign. Proclaiming “saucy love is back,” the sandwich is being promoted alongside online music downloads provided by Pandora (shame on you Pandora!, although I suppose you have to make money somehow). With the website featuring a “McRib DJ” and a strong mobile phone marketing camgaign, the current promotions are squarely targeted to teenagers and young people.

So what is an intrepid Houston Foodie to do when confronted with such a peculiar culinary phenomenon? That’s right: Taste test!

Let me start by saying I have not been to McDonald’s in several years. The way I see it, a foodie setting foot in a McDonald’s is kind of like a politician patronizing a titty bar — there’s nothing really wrong with it, it just looks bad. So I donned some sunglasses and a baseball cap, pulled down low, and drove to my neighborhood Mickey D’s. I ordered the McRib meal (4 bucks and change). I drove home with all 4 windows down, otherwise the McDonald’s smell lingers forever. (Side note: Years ago I had a vegetarian girlfriend and on the rare occasion I would sneak in a McDonald’s run, the next time we got into the car she would wrinkle her nose and proclaim indignantly, “You went to McDonald’s!” I couldn’t tell if she was offended or jealous).

Back at home, the evaluation began. Digging the paper-wrapped sandwich out of a clot of bag fries, the first thing you notice is the overwhelming smell of liquid smoke. There is nothing subtle about the BBQ sauce that the McRib sandwich is drowned in. Aside from the standard-issue bun, pickle, onions and sledge-hammer BBQ sauce, the McRib’s focus is the “processed pork patty.” 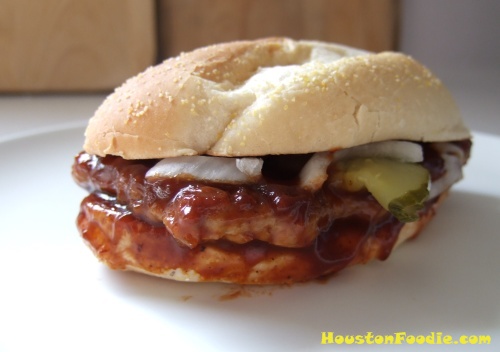 This processed pork patty is a wonder of engineering. Processed into a perfect oval shape with fake horizontal bumps representing either grill marks or ribs, it has a similar external texture as a hamburger patty, except the McRib patty has a duller, sicklier gray color.

Biting into the sandwich reveals a texture and consistency like no other worldly substance — variously described as “fluffy” or “mealy”. The pork particles (?) seem to be bonded together in a thick, rubbery, gelatin-like suspension. Yummy!

So far, so weird. But what about the taste? Not unexpectedly, the actual flavor of the patty does elicit the slightest pork rib flavor. But after a few bites all you taste is the BBQ sauce. Overwhelmed by the liquid smoke, the patty just becomes a delivery mechanism for the BBQ sauce.

I would venture to say that the real reason hardcore fans of the McRib love it so much is simply the BBQ sauce. It’s like a nuclear explosion in your mouth. The pork patty, essentially flavorless, acts as a filler with a unique “mouthfeel.”

This may explain some of the unusual geographic marketing of the McRib. McDonald’s only makes it available in some areas of the country. Perhaps they focus the marketing in areas that do not have big BBQ traditions so that the McRib BBQ sauce offers a more unique experience? That of course does not explain its presence in Houston, but maybe it does in Omaha. Anyway, just a guess.

After finishing off my McRib, I did indeed feel like I had just watched an episode of Jerry Springer — while it was on I was marginally entertained in an hypnotic, “watching-a-train-wreck-in-slow-motion” sort of way. But then when it was over all I could think was “What the hell was that?!”

Update 12/5/08: The New York Times has a lengthy piece on the McRib and its (un)availability. When it comes to the McRib, if you live in NYC then you’re SOL.

This entry was posted in Blog Only, Food, Food for Thought and tagged mcdonalds, mcrib, new york times. Bookmark the permalink.

2 Responses to McRib is Back!