Biba’s One’s A Meal lands right in the middle of lower Westheimer, taking on not just one, but two, neighborhood heavyweights. 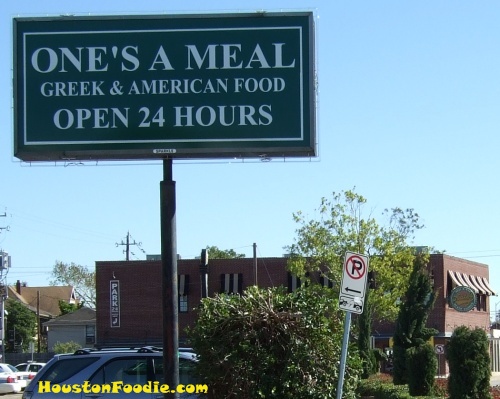 What’s not to love about Biba’s One’s A Meal? It is, after all, a Houston institution. John Katsimikis has been serving up gyros, pizzas, pancakes, opinions, and personal advice to generations of families, hipsters, neighborhood miscreants and drunken party-goers for what seems like forever.

Of course the W. Gray location was showing its age for some time. The announcement that Biba’s would be moving to 812 Montrose, in the old Rouge restaurant space, was met with great anticipation by Biba’s many regulars.

It seems to be a successful move. A recent Saturday morning visit found John presiding over everything and the tables filled with regulars.

The new location, when considered by itself, looks like a great move. Montrose and Westheimer is a great place for a 24-hour diner. But when taken in context, the location proves to be quite interesting. Not 200 feet away, of course, is the 500 pound gorilla of 24-hour Houston diner/delis — Katz’s. Is there enough of a market in this area for two 24-hour diners side-by-side? Probably. Anyway, it should be interesting to watch this competition play out.

But Biba’s is not just a diner, it’s also a Greek restaurant. And again, the new location is provocative to say the least. Not 2 blocks away is the 500 pound gorilla of Houston Greek restaurants — Niko Niko’s. Is there a big enough market for 2 Greek restaurants in such close proximity? Very probably, considering the ubiquitous long lines at Niko’s.