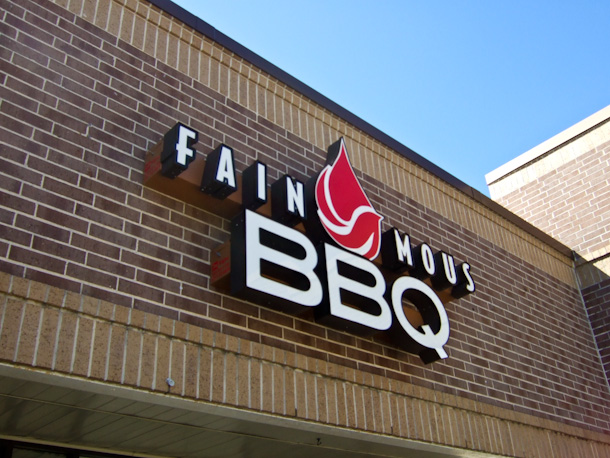 In a recent article about chilorio, or Mexican-style pulled pork, I lamented the lack of a good American version of this classic dish in Houston. American-style pulled pork is a quintessential dish of the south, made famous in the barbecue joints of places like Lexington, N.C. and Memphis, Tenn. Houston, of course, has its share of barbecue joints, and a furious debate about the best style of Texas barbecue still rages on a daily basis.

So you could argue that in a city where Texas barbecue is so obviously enshrined and entrenched, that it would be a folly to open a barbecue joint in the style of Tennessee or the Carolinas. “You may as well open a Taco Bell in Mexico City,” a particularly dismissive Texas barbecue fanatic mentioned to me.

Recently, while putting together a list of Houston barbecue joints, I came across a place I’d never heard of called Fainmous BBQ. I thought I’d heard of, driven by, or eaten in just about every barbecue joint in Houston, so this was a surprise. Turns out this place has only been open a few months, so there isn’t a lot of information about it. One piece of information I found was the owner is from Tennessee. Could true southern-style barbecue have finally reached Houston?

On a recent Saturday I joined a group of barbecue friends, including one self-proclaimed expert in North Carolina-style barbecue, and headed down to a small shopping center on South Post Oak. Turns out this place does profess to make Tennessee-style barbecue. So we ordered a plate of southern-style pulled pork, as well as the usual Texas barbecue staples of brisket and ribs.

The sliced brisket was good – moist and tender but with a lighter smoke flavor that is a hallmark of American southern-style barbecue. Ribs also were good, with a hint of a sweet dry rub (barbecue ribs are also a tradition in Memphis). All-in-all good brisket and ribs but probably not worth going out of your way for, considering all the other barbecue joints in Houston. 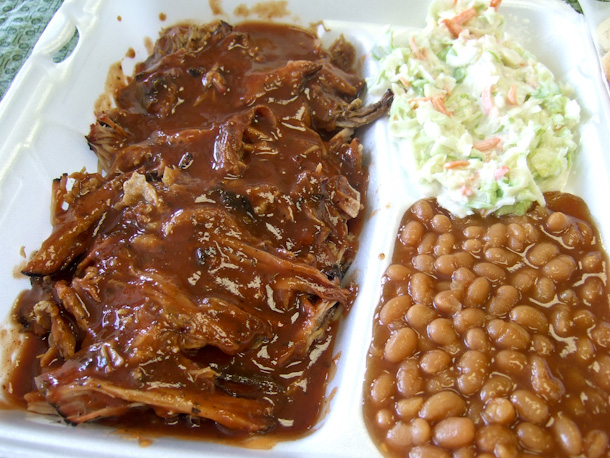 On the other hand, the pulled pork justifies a visit to Fainmous BBQ. Southern-style pulled pork is basically a seasoned pork shoulder that is slow-smoked until it is falling apart, then it’s shredded, chopped and covered in a tangy barbecue sauce.

Unlike a lot of pulled pork you get in Houston that’s stringy, dry and soaking in a sickly-sweet sauce, the pulled pork here has a nice seasoning (dry rub) and a smoky bark (crust) that combines with the richness of the pork itself. A well-balanced (not too sweet) sauce based on tomatoes and vinegar further adds an acidic tanginess to the fattiness of the pork.

Good pulled pork is a welcome addition to the Houston barbecue scene. Owner Jamie Fain is from east Tennessee and slow-smokes his pork for twelve hours with hickory wood. It may seem like a longshot to open a Tennessee-style barbecue joint in Houston, but Fain’s making a right go of it and Houston barbecue fans are the better for it.