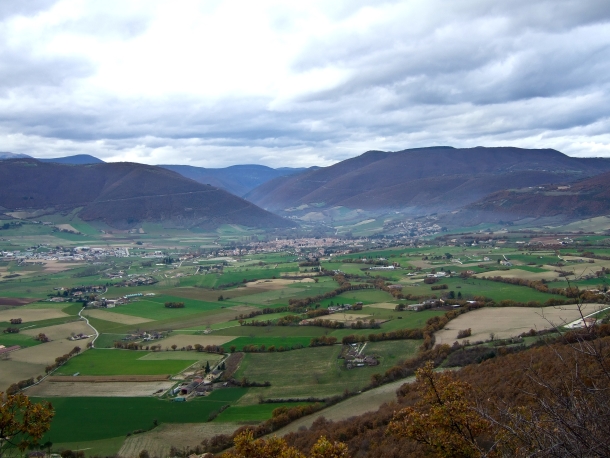 The Valnerina Valley, with the city of Norcia in the center of the picture

We’d been traveling for most of a day – flying into Rome from the U.S., renting a car at the airport and then driving three hours north into the hills of Umbria. Our destination was Norcia, a small town located on a high plateau – some 2000 feet above sea level – in the Valnerina, a wildly fertile valley enclosed by fog-shrouded hills and nestled up to one of the more impressive subranges of the Apennines – the Sibillini Mountains. We drove into the Porta S. Lucia, one of the gates through the still-standing 14th century walls that ring the city, and wedged our woefully-underpowered-for-driving-in-mountains Ford Fiesta into a spot on the narrow street in front of our hotel.

We got out and took a deep breath. The cool air was infused with the fragrance of burning wood from the city’s fireplaces and kitchens, a characteristic of this part of central Italy that would color and flavor many aspects of four-day visit here. Blinking away the cobwebs of jet lag, we peered up the street into the town’s main piazza, which was surrounded by the obligatory church, town hall, and museum, all of which orbited around a big statue in the center. Statues in the middle of piazzas are a dime-a-dozen in Italy, featuring the usual suspects like Garibaldi, Emanuele, and Cavour. But this one was different. This was a statue of St. Benedict, the patron saint of Europe and the inspiration for Benedictine monasteries the world over. This, too, would color our visit to Norcia. 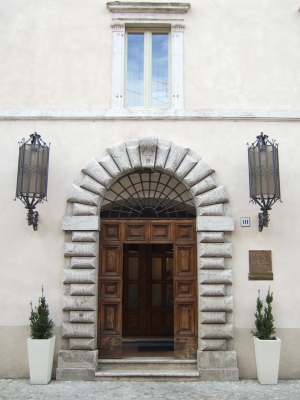 For now, we were ready to check in to our hotel – the Palazzo Seneca, a new Relais & Chateaux resort owned by a Norcian family – the Bianconis – who have run hotels in this area since the 1850s. Relais & Chateaux is an international association of member hotels and restaurants that promote only the highest level of service and accommodation, and Palazzo Seneca fits right in to that tradition. Housed in a 16th century Umbrian palace that the family spent six years and untold millions remodeling, our large and newly-renovated room with all the technological bells and whistles (HDTV, Wi-Fi) would be our base for exploring the city of Norcia and the surrounding area.

We had come to Norcia for the food. Norcia is known as the pork capital of Italy, presided over by the norcinos – pork butchers – and their retail shops, called norcinerias. So famous have they become, that pork butcher shops throughout the whole of Italy – not just Norcia – are called norcinerias. And if being the city of pork was not enough, Norcia is equally known for its tartufo nero – black truffles – those pungent relatives of mushrooms that grow underground and can only be rooted out by truffle-hunting dogs. Throw in a long tradition of cheese making, as well as a bounty of local produce and grains, and Norcia reveals itself to be an (relatively) unknown mecca for food lovers. 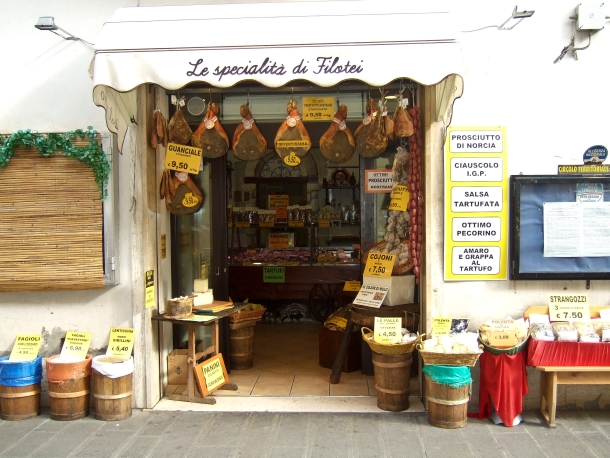 An initial walk through town revealed row upon row of norcinerias, all with different “personalities” as manifested in the colorful norcinos who own them and who are more than willing to woo a couple of American tourists into their shops with free samples (few spoke English, so food was an effective lingua franca). Entering a norcineria is like entering a pork-lover’s Disneyland; towers of Prosciutto di Norcia – cured pig leg that’s more savory and spicy than its better-known cousin, Prosciutto di Parma – compete for space with cordwood-like stacks of salami (cured pork sausage). Incredibly, huge glass orbs filled with priceless black truffles — which would normally elicit gasps of delight from globetrotting gastronomes — are hardly noticeable among this pork extravaganza.

Our appetites whetted, we headed back to the hotel. Like most high-end resorts, Palazzo Seneca offers activities and services common to most resorts (like spa treatments and massages), as well as activities specific to the region of the property, in this case cooking classes in typical Umbrian cuisine and truffle hunting expeditions into the surrounding hills. We signed up for a cooking class and spent a morning in the kitchen of the hotel’s highly acclaimed restaurant, Vespasia, with Executive Chef Flavio Faedi. 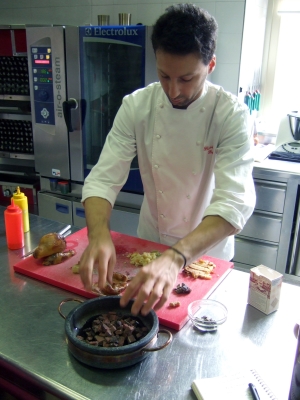 I asked Faedi why Norcia’s pork products were so highly regarded in Italy. “The natural environment has a lot to do with it. At this altitude, as well as our distance from large cities, the air and water are pure. Many of the pork products are air cured, and they take on the aroma of indigenous plants and trees – juniper, rosemary, oak.” Indeed, the smoky fragrance in the air that we noticed when first arriving in Norcia was recognizable in many of the products we tasted.

At his Vespasia Restaurant, Faedi oversees a menu of traditional Umbrian/Norcian dishes executed with contemporary techniques, using locally sourced ingredients. In a private, two hour cooking class, we learned how to make, among other things, spezzatino – a stew traditionally made of beef or pork. In his version, Faedi uses venison, specifically Roe deer indigenous to the area. It’s cooked using a technique similar to sous-vide, then diced and added to cipolle (onions) and patate (potatoes) from the nearby town of Cannara, and local mele cotogne (quince). A reduction of the local Montefalco wine is added, as well as chopped olives, to create a delicious update on a favorite Italian dish.

After lunch, we walked to the main piazza and the statue of St. Benedict. If pork provides the corporeal and economic sustenance of Norcia, then St. Benedict provides the spiritual nourishment. Along with his twin sister St. Scholastica, Benedict was born in Norcia in 480 A.D. The Church of St. Benedict is rumored to have been built on the ruins of their house. The Benedictine monastery here is relatively recent, having returned only 10 years ago after the original order was driven out by Napoleonic decree in 1810. Many of the monks currently here are from the United States. 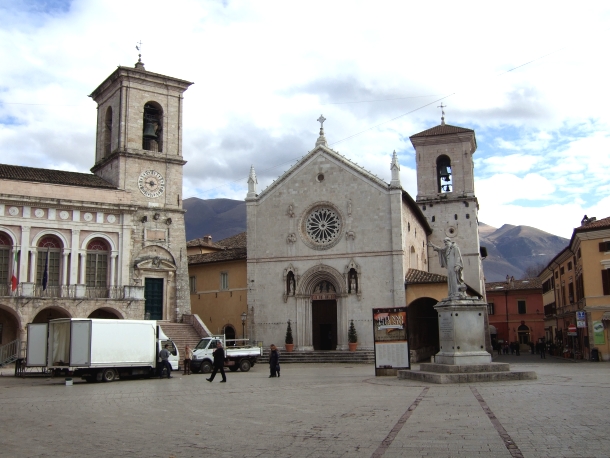 Main piazza of Norcia with the Church of St. Benedict

The monks maintain a full liturgical schedule – with readings, prayers, chants and masses throughout the day, most of them open to the public. At the suggestion of our hotel staff, we attended the Compline, or final prayers of the day. Showing up at exactly 7:45 in the evening, you are led down into the church’s crypt where the monks perform prayers and Gregorian chants. Having attended operas and symphonies throughout Europe, this was one of the most moving and spiritual performances I’ve ever attended.

For now, Norcia remains a relatively tourist-free zone of Italy and the attractions of the area – the cuisine, history, and nature – are all spectacular. Also, if you can get there – rental car is really the only way for most tourists – the cost is reasonable. In our two week stay in Italy, Norcia and the Palazzo Seneca were one of our least expensive destinations. Of course, the fact we were traveling in November (low season) also made it very inexpensive. As we drove out of Norcia, our car weighed down with prosciutto, cheese and wine and our spirits raised by Gregorian chants, we rolled down the windows, breathed in the mountain air tinged with the scent of burning juniper and oak, and vowed to return.

You can view a photo gallery of my trip to Norcia, Italy.