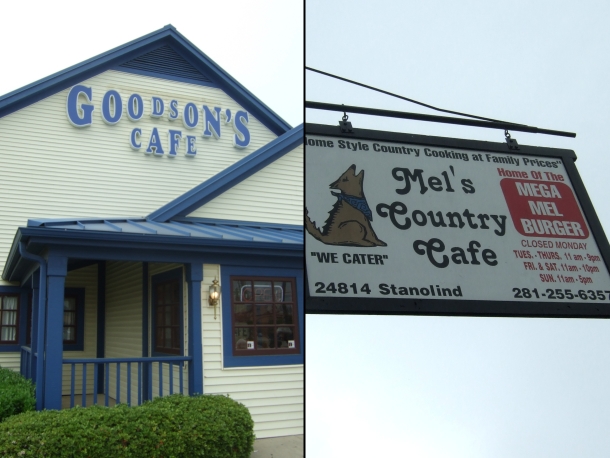 When it comes to arguing about the best chicken-fried steak (CFS) in the greater Houston area, there’s no greater rivalry than the one between Mel’s Country Cafe and Goodson’s Cafe in Tomball. These are two old-school cafes that have been providing Texas-style comfort food for decades. They’re both family joints — owned and operated by local families and patronized (mostly) by Tomball locals. All Texans know that when you combine local traditions, generations of families, and a sacred Texas dish like chicken-fried steak, there’s bound to be a “difference of opinion.” A rivalry such as this produces a lot of self-proclaimed chicken-fried steak experts.

When I first started reviewing chicken-fried steaks in Houston, many readers were adamant that I visit these two CFS rivals. “How can you claim to be evaluating CFS in greater Houston without visiting these two places?” they’d ask. They were right, and on a recent weekday I spent a long lunch visiting both restaurants.

As a born and bred Texan who grew up eating CFS, I’d never visited either restaurant before. So, to use a particularly apt expression, “I don’t have a dog in this fight.” In other words, I hope my evaluation will offer an objective comparison between these two CFS heavyweights. And just to be sure, I brought along my friend Eric, another native Texan and CFS connoisseur, to offer a second opinion. Although we differed on some small details, the reviews below reflect our general assessment of the CFS at Mel’s and Goodson’s.

Goodson’s has been around since 1950, under various owners, and currently occupies a newer building just off Highway 249. A sign welcomes guests to the “World Famous” Goodson’s Cafe, the “Home of the best chicken fried steak in Texas.” I liked this joint’s moxie. In fact Goodson’s has been featured on several television shows including “The Eyes of Texas” and the Travel Channel’s “America’s 101 Tastiest Chowdowns” (voted number 62).

The dining room is large but comfortable, with big booths, wood paneling and curtains on the windows. Service is the essence of small-town friendliness. The menu is a mouthwatering selection of Texas country cafe favorites — pot roast, fried chicken, pork chops, catfish, shrimp, etc.

The CFS here comes in two sizes: the small ($8.79) and the large ($9.99). The standard sides apply: two vegetables, rolls and gravy are included. We ordered the large size to split, with side orders of french fries and macaroni and cheese, and two glasses of unsweetened iced tea. 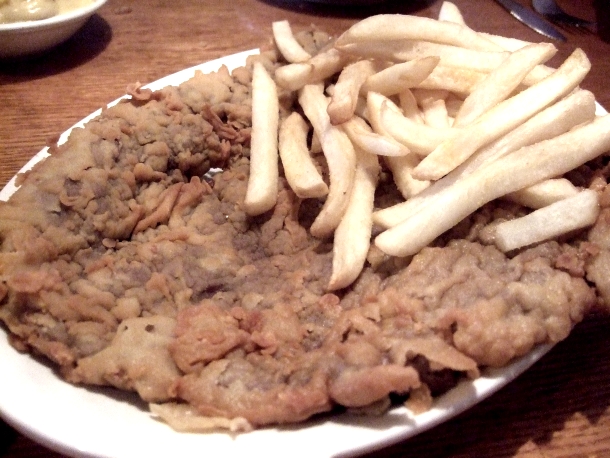 Meat. The large CFS filled an entire plate, and to emphasize that fact the two sides — the bowl of mac and cheese and a bunch of fries — were piled on top of the steak itself. The meat had been pounded/tenderized until it was quite thin. Still, the steak itself was somewhat tough. As far as I could tell there was little or no seasoning on the meat.

Crust. Fried to a light golden brown, it was thinner than many contemporary chicken-fried steaks, but adhered completely to the meat and had a good flavor/seasoning.

Gravy. Good. Although it suffered visually from an unusual (and some might say unappetizing) yellow-gray color, the taste was actually quite rich and flavorful. Black pepper flakes were noticeable but did not really come through in the flavor.

Value. Very good. For $9.99, the chicken-fried steak was large and satisfying. It’s worth noting that everything on the Goodson’s menu is incredibly priced, with almost everything less than $10. However, I can imagine some people will argue that you get what you pay for.

Extras. Poor. On this day, the waitress informed us that the oven was broken so they did not have any rolls. Hey, it happens, and some nice Texas toast was substituted. But the real problem was with the sides. The fries were some of the worst I’ve ever eaten — soggy, soft, pale-yellow and no flavor to speak of. They reminded me of frozen fries. Similarly, the mac and cheese seemed to lack effort — watery with congealed globs of cheese and overcooked macaroni. There may be some good sides on this menu, but these weren’t them.

Mel’s is further off Highway 249, closer to the center of Tomball, and literally on the other side of the tracks. It’s a big, low-ceilinged dining room. When you first walk in, you are shunted over to the steam table where you can pick and choose a main course (the beef tips looked fantastic) and a couple of sides, or you can sit down and choose off the menu. The CFS was on the menu, so we sat at a table. Much like Goodson’s, everyone we talked to made us feel welcome.

The CFS here is listed as “16oz Large” for $15.95 and “8oz Small” for $10.95. We decided to split the large. When I asked for the gravy on the side, our waitress looked almost offended and explained, “Gravy is always on the side.” That’s a good sign in my book. We ordered fries and “string beans” for the sides. 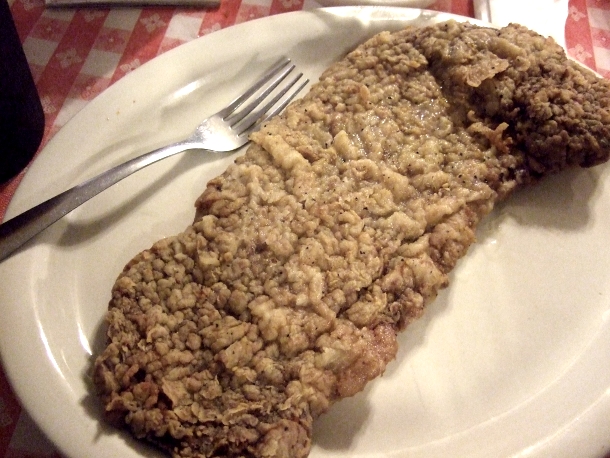 Meat. A long, unusually thick (maybe half inch) piece of well-seasoned meat. Although tenderized, a good part of my half was gristly and hard to chew, but those are the breaks in the CFS game. Another friend who joined us got a small CFS and it was perfectly tender.

Crust. Surprisingly thin and light. But not unpleasantly so. Unlike a lot of contemporary CFS that have a thick, crunchy crust, this coating had an almost “cutlet” or “milanese” style to it. The crust itself adhered totally to the meat, and had a great texture and flavor, but it was clearly subordinate to the meat itself (not always the case, surprisingly).

Gravy. Average. A more traditional “white” or “cream” gravy, it was surprisingly bland. A bottle of hot sauce on the table was recruited to spice things up — few dashes of the sauce and a stir with a spoon woke it up nicely.

Value. Average. $15.95 for a large CFS, two sides and cornbread is a bit on the pricey side (compared to other large chicken-fried steaks around town).

Extras. Very good. The string/green beans were flavorful (they came from the steam table). The fries were standard-issue, but had the skins on, were very crispy, and complimented the CFS nicely. The square chunk of cornbread, though somewhat dry and crumbly, had a delicious, sweet flavor.

Overall grade: B+. The meat takes front and center here — a glorious, thick cut that is nicely complimented by the light crust and some tasty sides. Throw in some friendly service and an old-school Texas atmosphere and you’ve got, well, a winner.

Although a bit more expensive and out-of-the-way, Mel’s wins this CFS rivalry by a solid margin. Mel’s CFS matches up to many of the excellent chicken-fried steaks in Houston proper. Truth be told, Tomball residents are fortunate to have both Mel’s and Goodson’s CFS to choose from. Would I recommend an inner-loop Houstonian drive out to Mel’s just for the CFS? Honestly, no. There are too many good chicken-fried steaks in Houston to warrant that. But if you are interested in the whole CFS experience — the traditions, the families, the friendly service and yes, the debates (and a chance to become a self-proclaimed CFS expert), then a drive out to Tomball is a worthwhile trip.