“Trinity Plate!” shouted the lady at the pickup counter at Pierson & Company Bar-B-Que in Houston’s Oak Forest neighborhood. Five minutes before I had stood at the adjacent order counter and requested a three meat plate: brisket (loose cut), ribs and sausage. 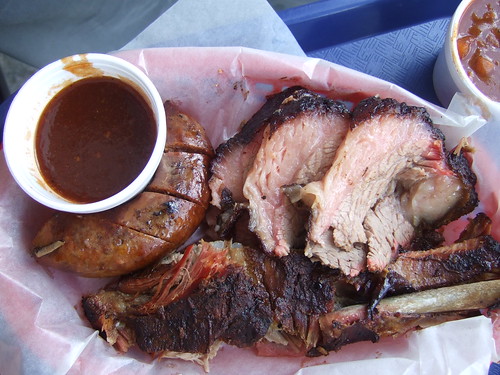 I looked up at the lady and she looked back, blinking and thinking, I’m sure, “What’s this guy waiting for?” Then it dawned on me: Trinity. Three meat plate. I stood up and meekly gathered my plate. The lady smiled knowingly. I’ve been to alot of barbecue joints, but I’ve never heard a three meat combo called a Trinity Plate. I liked it. It’s one of the many endearing eccentricities at Pierson & Company Bar-B-Que that keeps me coming back.

Of course it all makes sense. Brisket, pork ribs, and sausage is the holy trinity of Texas barbecue. Every barbecue joint worth its salt is judged on those three dishes. When you talk about barbecue in Houston, Pierson’s is always mentioned as one of the best when it comes to “the trinity.” By some counts, there are over 200 barbecue joints in greater Houston. As I sat in the mesquite-drenched air of Pierson’s small dining room, working my way through generous portions of fatty brisket, fall-off-the-bone ribs and meaty, spicy sausage, I thought about the other reasons I keep coming back to Pierson’s, and why it’s held in such high regard in a crowded field. Of course, you consider the food. And you also consider the people who make the food.

The barbecue at Pierson’s is often described in the context of the East Texas/African-American tradition of barbecue, that is, with a focus on a sweet sauce as a complement to the meat (often chopped instead of sliced). This is certainly true, but I would also argue that Clarence Pierson, the owner, is a quintessential pitmaster, a smoke man, very much in the tradition of the legendary Central Texas pitmasters. In fact, when someone asks me where they should go to get Central Texas-style barbecue in Houston, I usually refer them to Pierson’s.

In the Central Texas barbecue joints that evolved from meat markets run by Czechs and Germans, it’s all about the meat and the smoke. Side dishes like beans and potato salad are secondary; barbecue sauce is an afterthought. Heck, most of the big traditional joints like Kreuz and Louie Mueller don’t even provide plates or utensils. Smoked meat is served on sheaths of butcher paper. You eat it with your fingers. 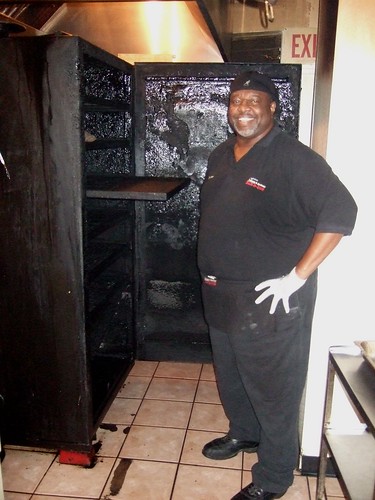 It’s this almost religious devotion to the infusion of meat with smoke that sets Pierson’s apart. Pierson smokes his meat for fourteen hours using mesquite wood that’s fed into a mammoth David Klose-built upright smoker (David Klose is the pre-eminent maker of barbecue rigs and smokers, and is headquartered in Houston). After three years of continuous smoking, the inside walls of this smoker are incredibly well-seasoned. You can taste it in the barbecue here. “When I had David build this smoker for me, I had him add a gas-fired heat source to the fire box. That was a waste of money. I never use it. A pile of coals and four pieces of mesquite is all that’s needed to fire it up.”

Similarly, there’s a devotion to and respect for the meat, especially the brisket. A brisket is basically two slabs of meat (the “point” and the “flat”), one on top of the other, separated by a layer of fat, with the outside surface covered with another layer of fat (the “fat cap”). Some barbecue joints consider this fat a nuisance and trim it off; Pierson trims off very little of the fat and this ensures the moist, smoky and flavorful brisket for which he is known.

Now, you’d think that this devotion to smoke and meat would be de rigueur in Houston (or all) barbecue joints. It’s not. Through some process of devolution or just plain carelessness, many barbecue joints will trim almost all the fat off the brisket before cooking, and then only smoke it for a few hours. This results in the dreaded dry brisket with a “roast beef-y” flavor. Of course, if you’re just chopping the brisket into sandwich meat and dousing it with sauce, this may be okay. But it’s not great Texas barbecue. It takes an individual with single-minded devotion to the art of smoking meat to make great Texas barbecue.

Native Houstonian Clarence Pierson came to barbecue almost by chance. After high school, working as a machinist, he frequented a barbecue joint tucked away in an alley near the intersection of 19th Street and Shepherd in The Heights. It was called Po-boy Joe’s Bar-B-Que and the pitmaster was a man from New Iberia, Louisiana named Joseph Bourda. Clarence and Joe became fast friends and Clarence eventually became a partner in the business. Joe taught Clarence everything he knew about smoking meat.

Po-boy Joe’s closed in the 1980s and Clarence went back to conventional day jobs for the next decade or so. But his skill at smoking meat did not languish and was not forgotten; over the years he continued to perfect his technique by cooking for family and friends. In 2007, having “gotten tired of working for other people,” Clarence resurrected the memory of Po-boy Joe’s in his own barbecue joint on West T.C. Jester: Pierson & Company Bar-B-Que.

Today, the Pierson’s operation is run by Clarence who prepares and cuts the meat, his sister Diane works the pickup window (“Trinity Plate!”), and his niece Britny takes the orders. On a recent afternoon, Diane and Britny were bemused that a writer was interested in taking pictures of their brother/uncle, and asking him alot of barbecue questions. But in Texas, whether east, west, south or central, if you stake a claim to smoking meat and creating the best barbecue that Texans love to eat, you will be recognized.