When it comes to food, you can eat it, cook it, write about it, obsess over it, talk about it, read about it, make friends over it, and, perhaps most memorably, take pictures of it. 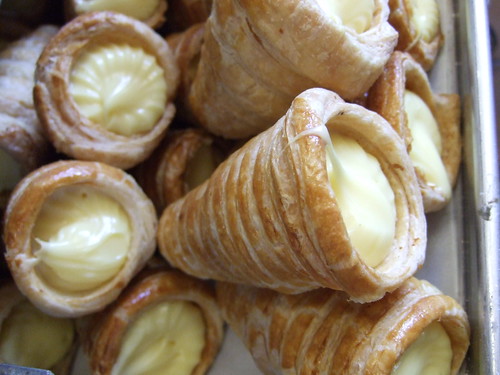 This pic was snapped at El Bolillo Bakery on Airline Drive before the first Chowhounds taco truck crawl. We were noshing on the delectable goodies and taking photographs the whole time. These conos were some of the most photogenic (and tasty) of all the pastries. A flaky pastry cone is stuffed with a not-too-sweet vanilla custard. 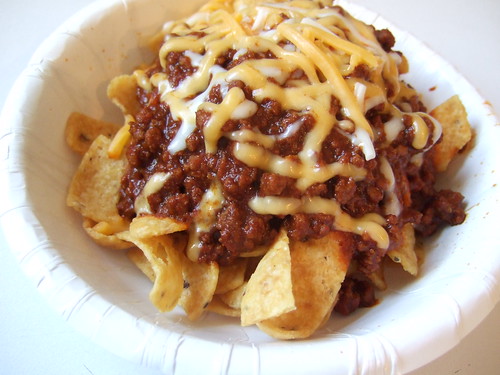 Cooking took a backseat for me in 2009, with restaurant visits and food writing taking up most of my free time. I did find some time to cook up a bowl of chili for a blog post I did about Frito pies. I wanted to get as close as possible to the Frito pies I ate at Little League games when I was growing up in Beaumont. This was the result. I think I got pretty close. 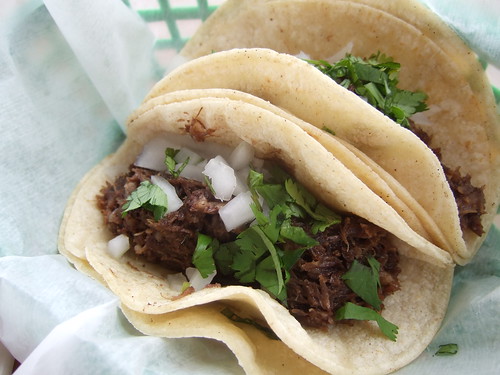 For a blog post on Menudo, I visited Noemi’s Tacos on the advice of Alison Cook. The menudo was great, but I also ordered a side of barbacoa tacos just to try them out. Talk about sexy. They tasted as good as they looked. As my friend and fellow food blogger Ruthie so aptly commented, “I want to make out with those tacos.” 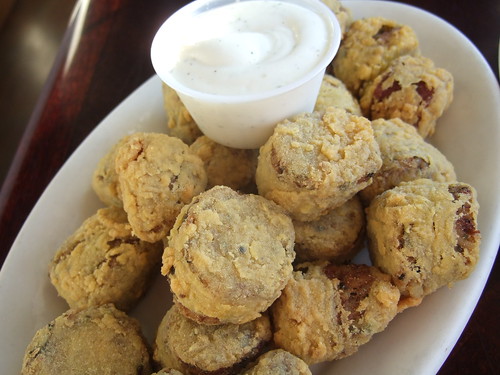 I reviewed Al-T’s for the Houston Press, and on one of my first visits we ordered pretty much the whole menu. Catfish and gumbo are the specialties of the house, but one of the most pleasant surprises was a plate of these fantastic boudin nuggets. Thick slices of housemade boudin sausage, breaded, deep-fried, and served with a side of ranch dressing. Awesome road food. 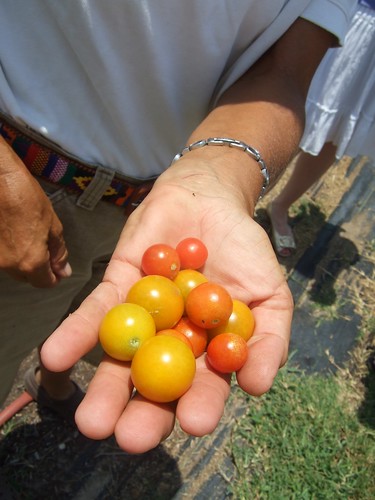 The Inn at Dos Brisas in Brenham sponsored a group of Houston food bloggers on a visit to tour the grounds and sample from a menu inspired by the produce grown in their extensive gardens. During the tour, ranch manager and horticulturist Johnnie Boyd Baker picked these tomatoes and presented them for us to taste. Yes, Virginia, there is a difference between the tomatoes you get at the supermarket and those that are grown locally and organically. 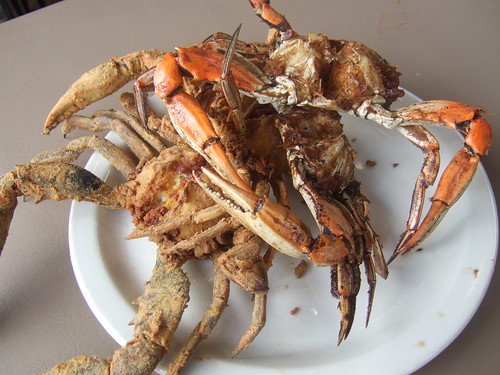 Nothing says “good eats” to my Southeast Texas born-and-bred palate like these spiky crustaceans. These barbecued and fried crabs at Sartin’s West in Beaumont were the pinnacle of my BBQ crab eating season. Just the right heat and spice level, with tender, steaming and flaky crab meat. I ended up writing an overview of Beaumont/Port Arthur BBQ crabs, with a more ambitious Southeast Texas review slated for this spring. 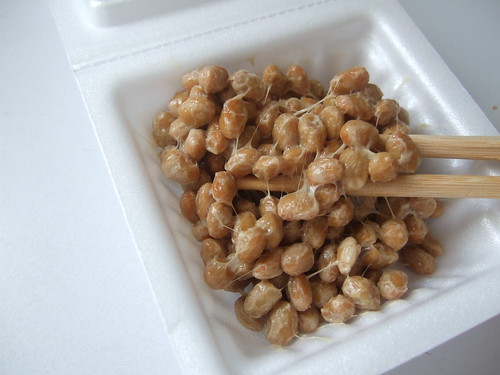 Natto is not something you usually find on Houston menus, even on Japanese restaurant menus. For a Houston Press blog post, I headed west to the most authentic Japanese market in Houston: Nippan Daido. Natto has one of the most unusual textures, colors and flavors I’ve ever experienced. The slimy, snotty texture and the funky orange-brown color make for a great, if not particularly appetizing, visual. 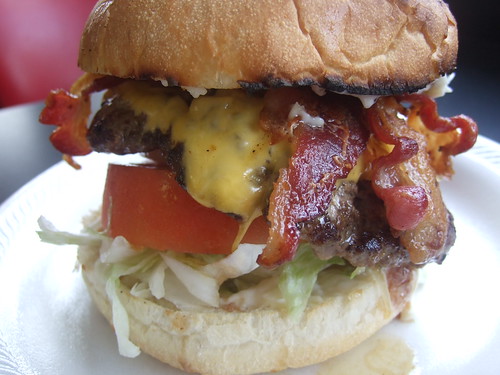 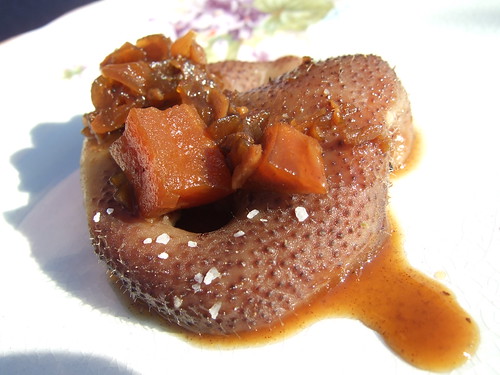 The roasted pig snout picture is back in all its majestic glory! Few of my pics have elicited such a broad range of responses from “Cool!” (my nephew) to “Ewwww!” (everyone else). It generated a popular blog post too. And to answer your questions in advance: 1) no, you couldn’t feel/taste the whiskers, and 2) it tasted like fatty ham. 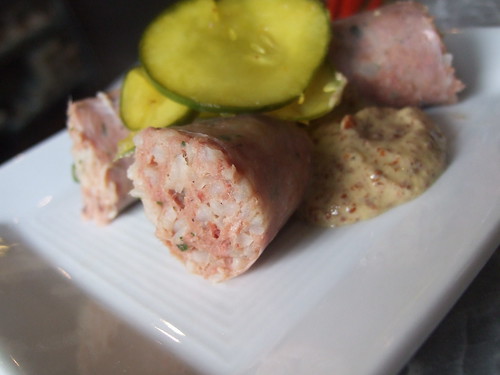 On a recent trip to New Orleans with a group of Houston food bloggers, Jenny and I ventured to one of the more notable restaurants open on a Sunday: Cochon Butcher. We ordered up a couple of dishes, sat down, and started snapping pics. When the counter person saw us, she kept sending out more dishes, including this very nice boudin.

Notes on the pics

I have no idea what an f-stop is. Or an exposure or an aperture. I have a trusty Fujifilm F20 point-and-shoot that does the job. I guess. I’ve never had a pro photographer look at my pics and render judgment. I like my pics. That’s all that matters.

The only settings I use on my Fuji are the flash and the something-is-really-close-up setting. All of the pics listed here are un-retouched, except for resizing. All are taken without flash, except maybe the Frito pie, which looks like there might have been a flash involved.

Since I’m not mucking about with camera settings, I can turn my attention to subject, composition, lighting, and scale. When food is the subject of a photograph, texture is the key. Absent smell-o-vision or taste-o-vision, the visual texture of food is the best way to get your mouth watering. The texture of the sliced boudin at Cochon Butcher is a good example, the whiskery pig nose, maybe not so much.

I love (lurve?) curves as part of the framing of my compositions, the Frito pie and boudin nuggets being good examples. Needless to say, I’m always a little disappointed when a restaurant uses square plates. Lighting is always a crap shoot — one of the most important food blogger skills is the ability to arm-twist a maître d’ into seating you at the best lit table in the house.

Scale is a quality of food photography that I find intriguing. In a recent food photography workshop we were taught to place a fork or other utensil in the photo to provide scale. However, most of the time I find it interesting to leave the scale (relative size) of the food ambiguous. Just how big is that Conos de Crema? The size of a quarter or the size of a fist? And is that cheeseburger a full size burger or a slider?

At the end of the day, I write about and photograph food because it is an endlessly fascinating subject. Everyone has to eat food, and seemingly everyone has an opinion about food, and many make their living working with food. People who are passionate about food are inevitably the most interesting people I meet.