Max’s Wine Dive is definitely one of the most unique concepts in Houston dining. 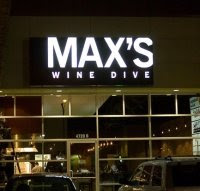 Well known among both Houston foodies and the see-and-be-seen hipster set, Max’s bills itself as “Haute Dogs and Shiraz, Kobe Burgers and Cabernet, Fried Chicken and Champagne.” In other words, upscale comfort food with a knockout wine list.

Max’s culinary chops have enjoyed a generally good reputation in Houston. However with the departure of founding chef Jonathan Jones a couple years ago, there was some of talk about Max’s losing it’s edge in the food department (scenester department is always going strong it seems).

Not unexpectedly, Chef Dei Maggi is apparently not satisfied with pushing out the occasional new menu item. On Monday, March 30th, Chef Dei Maggi will create a one-off, 7-course wine tasting dinner described as a

“Brief examination of clinical insanity and the role it plays in groundbreaking culinary developments. This dinner will feature food like you never before experienced in Houston – using techniques and ingredients on the cutting edge of the molecular gastronomic movement.”

In a recent post on the Food in Houston blog, the lack of a true molecular gastronomy restaurant in Houston was lamented. As if on cue, Chef Dei Maggi announced his molecular dinner. You have to give Chef Dei Maggi credit for ambition and audacity. If the execution lives up to the menu descriptions (60KB PDF), this should be interesting.

I’ll be attending and taking plenty of pics and hopefully live-tweeting the dinner.

For adventurous foodies this is a must-attend dinner. It’s pricey at $200pp, but it is comparable to the 7-course tasting menu with wine pairings at Textile. Plus you are supporting and encouraging a local Houston chef who is willing to take chances and push boundaries. Reservations can be made by calling 713.880.8737.