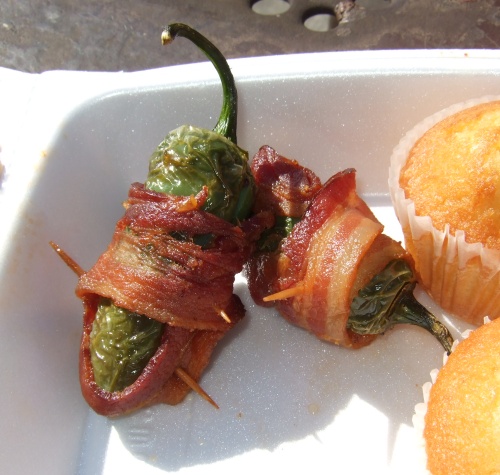 In recognition of Robb Walsh’s review of Houston’s 5th Ward meat markets, here’s a pic I took of one of my favorite dishes of the visit — bacon wrapped jalapeno peppers from Burt’s Meat Market.

Both Burt’s Meat Market and Davis Meat Market are Houston institutions. They’re literally on the “other side of the tracks” so alot of Houston foodies don’t make the trek slightly east of downtown. Those who do are well rewarded.

Burt’s pan sausage, which Robb justifiably raves about, is spiced and seasoned to the point where if you have it for breakfast you can still taste it the rest of the day. And I’ll have to say that the aroma that is infused into your house after cooking is better than after you cook bacon. Yeah, it’s all that.

The 5th Ward is one of the few areas around downtown Houston that has not been touched by gentrification. Neither Burt’s nor Davis have dining rooms, so make sure you’re prepared to get it to go.