Mostly Martha is the quintessential foodie chick-flick. Lots of warm-and-fuzzies. It’s kind of the anti-Sideways. And it’s a great movie. 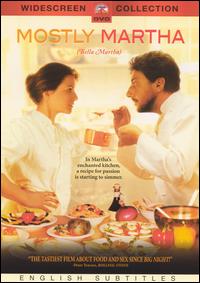 I went to a college known for its film school. I did not attend film school, but many of my roommates did. We spent nights around a dorm room table discussing movies. Picture the scene in the movie Swingers where the boys are sitting in the diner debating the derivative nature of Tarantino films. That was us. Right down to the late 80’s hipster outfits. We were money.

One of our favorite debates was this: Without seeing the credits, can you watch a movie and then guess if it was directed by a man or a woman? This was a great challenge for myself and these wannabe Steven Spielbergs. Turns out I was very good at watching a random movie and correctly guessing the gender of the director. Call it a stupid human trick.

So I dropped the Mostly Martha DVD into the tray and fired it up without knowing anything about the film’s cast and crew. It’s sub-titled so I didn’t pay much attention to the opening credits. About half-way through the movie I knew a woman had directed it (and a woman director is almost always a very good thing. Name one Hollywood boxoffice bomb directed by a woman). There were a few clues. The lead character, a woman chef, is strong and independent and likes to be in control. But the biggest clue was in the male supporting actors. They are:

The therapist. Even this capable and experienced psychologist can’t penetrate the emotional complexities of our heroine!

The neighbor. A handsome, patient and understanding architect, divorced with children.

The co-worker. A talented and entertaining Italian chef with unsurpassed charm and people-skills.

The mystery man. An Italian truck-driver who apparently owns a Medici-esque Villa in Tuscany.

Only a woman writer/director would come up with these Dreamy McDreamies! Somehow Fabio did not get cast. Of course I’m being facetious. The story, plot, and characters actually work very well.

So yes, this is a foodie chick-flick but it is very enjoyable for both male and females alike. It follows along the lines of the “food-as-therapy” story line. And guys, the director, Sandra Nettlebeck, did not forget about you. About two-thirds of the way through the movie, just when guys watching the movie start nodding off, the lead character (a hottie by the way) starts walking around her apartment in her underwear. Time to wake up, Greg! This is not a coincidence. Take it from somebody who somehow knows.

This entry was posted in Blog Only, Foodie Movies and tagged fabio, mostly martha, sandra nettlebeck. Bookmark the permalink.