The day began with our van trundling up a steep gravel path to the top of a hill where a weathered stone house sat among vineyards sprawling down the surrounding slopes. This morning was misty and dense with fog so that when we surveyed the landscape from our heady redoubt we only saw endless rows of grape vines stretching into a gauzy grey of clouds.

We were in the northeastern Italian region of Friuli-Venezia Giulia, not more than a kilometer from the Slovenian border, at the I Clivi di Ferdinando Zanusso & Figlio winery (I Clivi for short). We were met by Mario Zanusso, the son (figlio in Italian) of owner Ferdinando. Mario combines Hollywood good-looks with the earnestness of a college professor whose specialty is how to make wine. 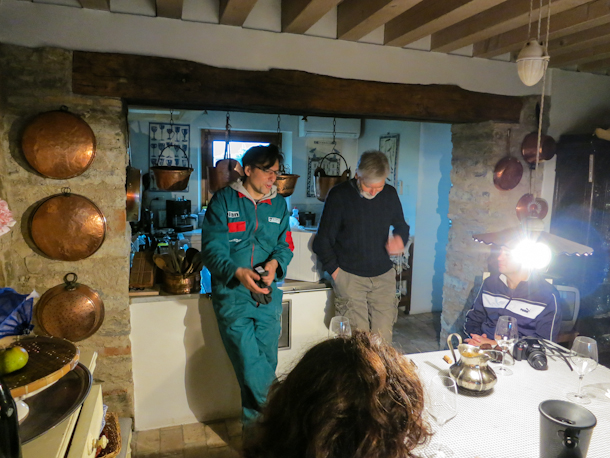 Inside the house, in a dining room warmed by a grand fireplace known as a fogolar that is the traditional center of the house in this region, Mario set up an impromptu tasting room with several selections of his winery’s latest offerings. There was a 2010 Friulano (formerly known as Tocai), the iconic white wine variety of this region. Also offered were a 2010 Ribolla Gialla, another native grape, and a 2005 I Clivi “Galea” Friulano.

After the wines were poured, Mario adjourned back into the vineyards and his father Ferdinando took over the presentation. If Mario is the ambitious young professor, then Ferdinando is the tenured dean of this winemaking department. After a career as a United Nations caseworker in countries like Sudan and Somalia, he arrived in Friuli in the early 1990s and acquired two old vineyards whose vines were in derelict conditions.

Having spent the last 20 years resurrecting the vines, Ferdinando explained a philosophy of winemaking that eschews unnatural or manipulative techniques for a “transparent” style of winemaking that lets the intrinsic qualities of the soil, climate and vines produce the wine. And indeed the Ribolla Gialla that my colleagues and I tasted was like nothing a typical American wine consumer would recognize. This white wine was almost clear in color with an uncompromising essence of salt and minerality balanced by pinpoint acidity and a tinge of citrus. It was one of the most unique and delicious wines I’ve ever tasted.

We were here as part of a tour organized and paid for by the Consorzio Colli Orientali del Friuli – an Italian government-sponsored consortium of wine producers in the area. “Colli Orientali del Friuli” translates to the “Eastern Hills of Friuli”, referring both to the geographic location of these winemakers as well as to the appellation (known as a D.O.C., or Denominazione di Origine Controllata in Italy) of the wines made here. In addition to traditional red and white wines, the Colli Orientali zone is known for the Ramandolo and Picolit sweet wines.

Clouds Over Nimis, from Ramandolo

Clearly the consortium and its members believe the time is ripe for the wines of this region to become better known on the world stage. Over the course of a week, our group of American and British writers toured the region to learn about the wine, food and history of this relatively unknown region of Italy.

In many ways the wine and experience at I Clivi were a microcosm of the winemaking industry in Friuli-Venezia Giulia and the Colli Orientali. This region is known for unique, uncompromising and – some might say – eccentric wines that reflect the cultural independence of this polyglot area near the borders of Slovenia and Austria. Unlike other Italian wine regions like Piedmont or Tuscany, Friuli-Venezia Giulia is not well-known outside of Europe. But inside Italy, the wines of Friuli, and specifically the white wines of Friuli, are considered the best in the country.

The history and tradition of winemaking in Friuli is both very old and very young. Winemaking in this region can be documented to pre-Roman times. It continued during the Roman Empire when Julius Caesar created an outpost here called Forum Iulii (Julius’ Forum), later known as Friuli. More recently, the industry was all but wiped out – first with the phylloxera (a parasite that destroys grape vines) epidemic of the mid-19th century and then with the devastating impact of two World Wars on this strategically-located region.

World War One was especially destructive, damaging not only the physical landscape of the region but also taking a toll on a generation of young men and their families. It was not until the 1970s when a new generation of winemakers started using modern techniques and resurrecting abandoned vineyards and varietals that Friuli once again became a center for Italian winemaking.

Indeed many of the wineries we visited followed the same familial pattern: parents of retirement age who originated the winery have turned over day-to-day operations to children who have just graduated from college, many from the highly regarded viticulture and enology program at nearby University of Udine. In addition to being talented winemakers, this new generation is fluent in both English as well as social media marketing: two of the most important skills needed in today’s global marketplace for wine. 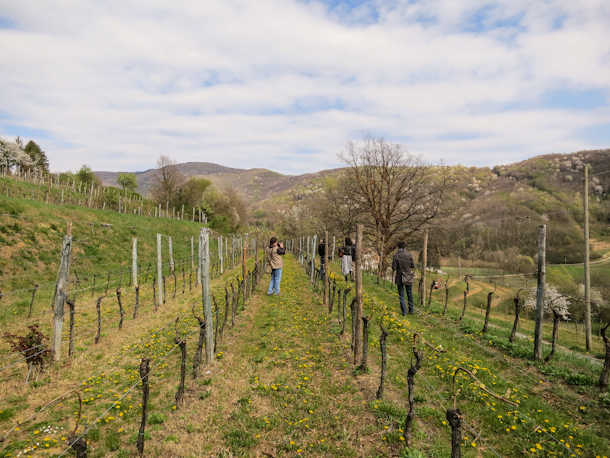 Of all the wineries we visited in Friuli the one that perhaps best exemplifies the unique character of this region is Ronchi di Cialla, started in 1970 by Paolo and Dina Rapuzzi ( “ronc” is translated as “vine-covered hill” in the local Friulian dialect; Cialla is the historic name of the valley where the winery is located). Previously, Paolo was working as a typewriter salesman for Olivetti when he had an epiphany. As he explained it: “We asked, should we die as typewriter sales people? Should we live in a system we don’t like? We didn’t like having someone bossing us around. The only person that can work without a boss is a farmer. So, on January 30, 1970 we started.” 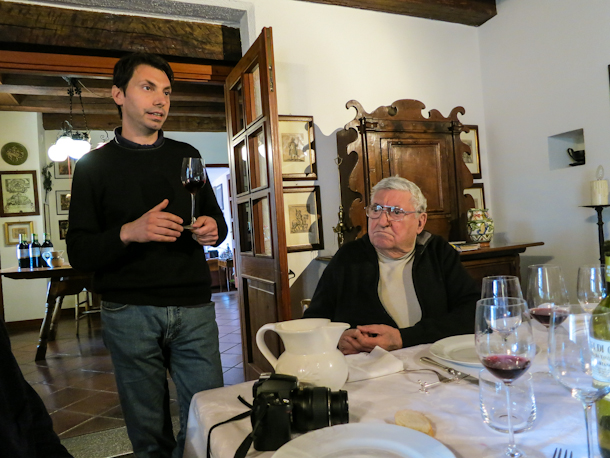 At the time, the vineyards he acquired were gravely damaged and mostly devoid of the forgotten native grapes of the region. Committed to producing wine unique to Friuli, the Rapuzzis searched the surrounding hills and found wild varieties of the native Schioppettino grape. To this day, the Rapuzzi’s are credited with resurrecting Schioppettino, now the canonical red grape variety of the region.

Today, winemaking at Ronchi di Cialla is managed by sons Pierpaolo and Ivan. All the wines are produced with minimal manipulation and use only indigenous grapes: Schioppettino and Refosco dal Peduncolo for red wines; Ribolla Gialla, Picolit and Verduzzo for whites. Their white blend “Ciallabianco” is considered one of the most distinguished wines from Friuli. 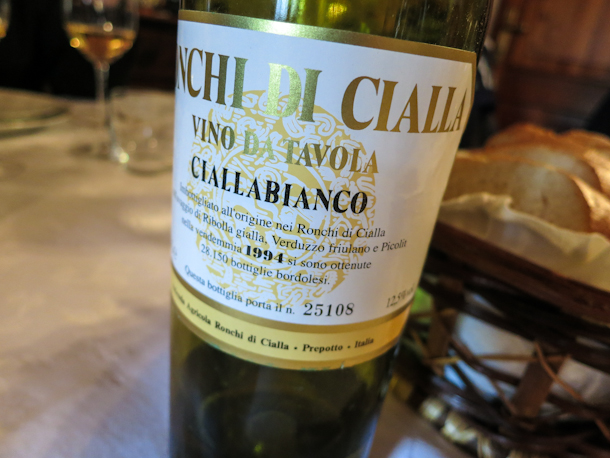 Undoubtedly there will be many more internationally-recognized wines coming out of Friuli in the coming years. And unlike other wine regions that are overrun by tourists idolizing absentee winemakers making globalized wines, Friuli is a relatively un-trafficked, tourist-free zone with comfortable accommodations, great food, and world-class wines that express the history and terroir of this unique region. Alas, it may only be a matter of time before the world’s wine press decides to make Friuli the newest flavor of the month. And then the relative anonymity of the singular Italian region known as Friuli-Venezia Giulia may soon become a thing of the past, for better or for worse.