A Few of My Favorite Things in Friuli – Part 2

I just returned from Italy and I’m still processing all the wines, foods, conversations and experiences that flowed from the COF2012 project. In a previous post, I cataloged my most memorable experiences in the first half of our trip. And by experiences, I’m not only referring to the wines – the obvious reason for why we were there – but also to the tastes, sights and sounds of the Colli Orientali del Friuli region (COF).

Like all of Italy, this experience was a holistic affair – a cascade of sensory information from the sight of patterned vineyards to the touch of warm-cool microclimates that change from hill and valley to the lingering scent of grape must and the sound of wind through the trees of the northern-most hills of Ramandolo. And, of course, the taste of wine, lots of wine.

Here are a few of my most memorable experiences from the second half of our trip. 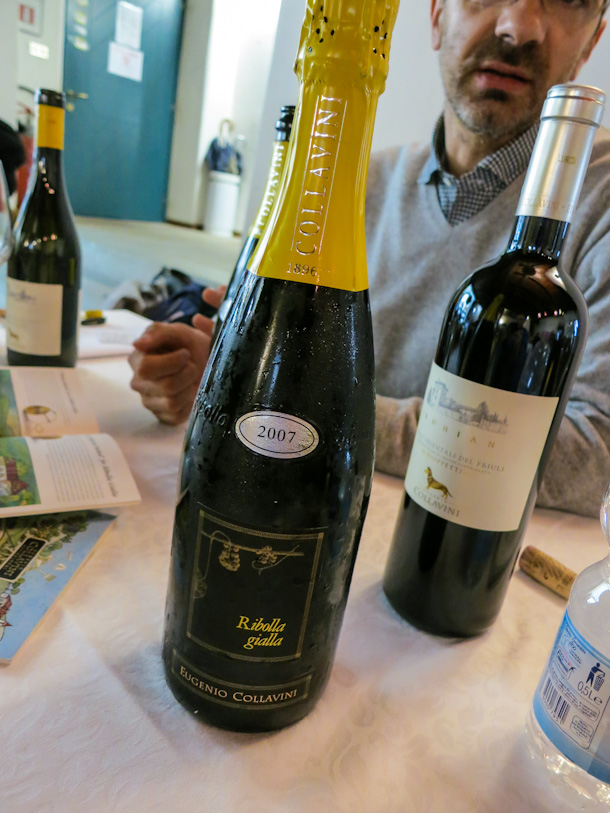 Ribolla Gialla Brut. We’d tasted a few sparkling wines from COF leading up to the Consortium wine tasting on Day 4. On this day, Luigi Collavini, grandson of the founder of the Eugenio Collavini estate and one of its current directors presented several outstanding wines. But the standout for me was a fresh, bright sparkling version of the Ribolla Gialla varietal. Luigi was a pleasure to talk to – a combination of Italian charm and old-world weariness with some deadpan humor thrown in for good measure. I’d easily drink this brut over the shlock prosecco we get in the U.S. these days. 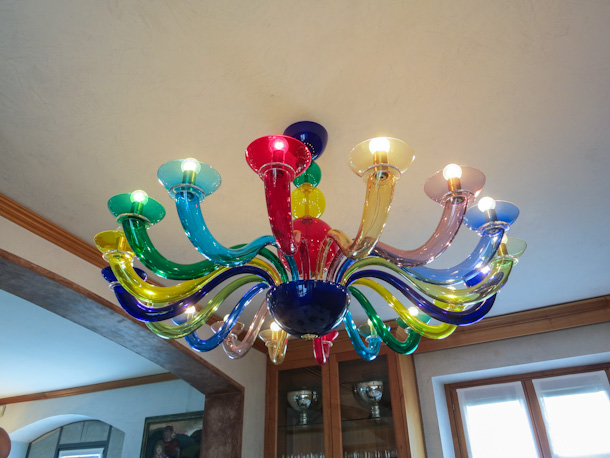 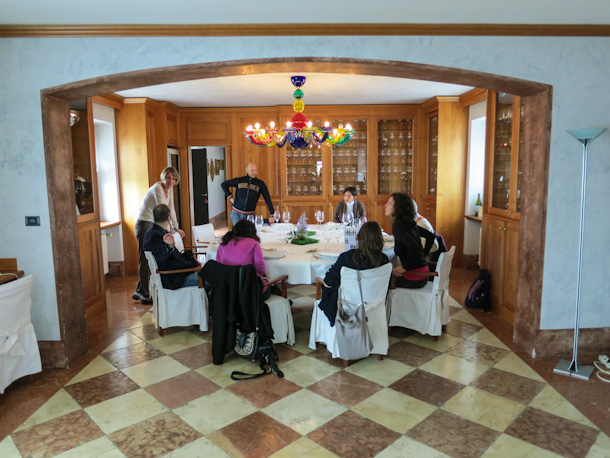 Zamò chandelier. Le Vigne di Zamò is one of the best-known wineries in COF. We had the pleasure of tasting Zamo wines and eating lunch with owner Brigitte Zamò and winemaker Alberto Toso. Hovering over the large circular table and an excellent selection of wine and food was one of the most fantastic chandeliers I’ve ever seen. It was a Memphis-meets-Murano-meets-Chihuly, Close-Encounters-mothership kind of a chandelier. It was fantastic.

Le Vigne di Zamò Winery: Panorama view. Click and drag within the picture to view a 360 degree view. If you have trouble viewing, or for a larger version, you can also click here.

Zamò courtyard. The Zamò vineyards are definitely some of the most picturesque of COF. In fact the header image of the COF2012 website was taken here. The courtyard of the winery’s main building is a great place to take in a view of sinuous, terraced vineyards. It’s also a great place to compare the varying microclimates of the estate, from the cooler rows of vineyards below to the warmer area around the winemaking facility and the breezy chill of the courtyard at the top of the hill. 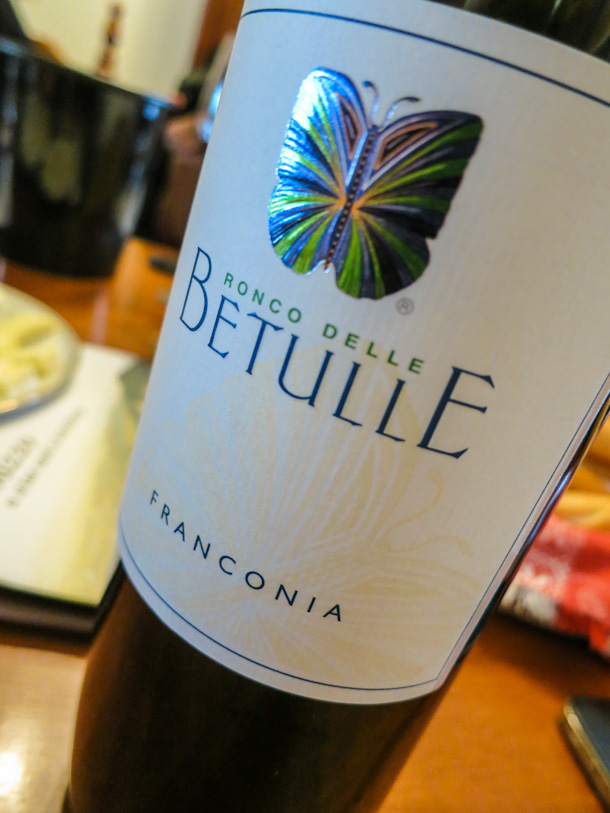 Ronco delle Betulle Franconia. We drank a lot of wines on the COF2012 tour; heck, we drank a lot of the same types of wines and varietals throughout most of the trip. And although it was certainly instructive to experience different vintages and expressions of the same varietal, we did take notice when a different varietal passed over our palates. One such instance occurred at the Ronco delle Betulle winery in the historic Rosazzo region of COF. Here, owner Ivana Adami and son Simone create wines from both native and international varietals. One of the more interesting is the Franconia varietal, known as Blaufränkisch in Austria, where it is mainly grown. It’s often used for blending in COF, but the Betulle was 100% Franconia and it rocked. Fellow blogger Elaine even took a couple of bottles home. 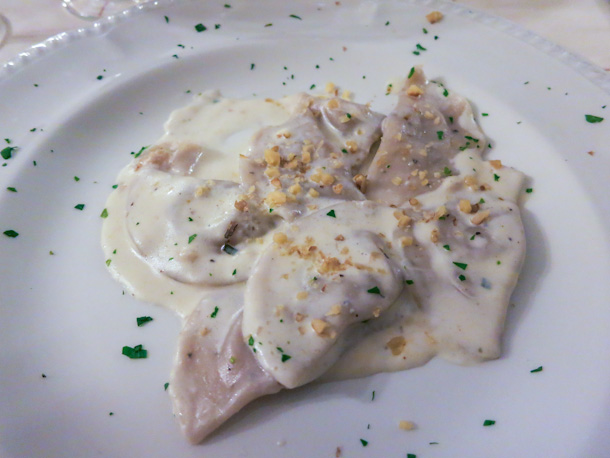 Formadi frant. On day 4 we were invited to a dinner of the Association of Prepotto Schioppettino Producers at the Stanig winery. Some 20 producers presented their expressions of this essential native red varietal of COF. Most of our group had little or no experience with Schioppettino, so this event was an eye-opener. It’s a world-class varietal when done right. I kept thinking to myself that I’d love row-after-row of these Schioppettinos on Houston wine store shelves rather than the huge number of middling Chiantis that are the norm. Dinner was great too; the standout dish for me was agnolotti in a sauce of a local cheese known as formadi frant. 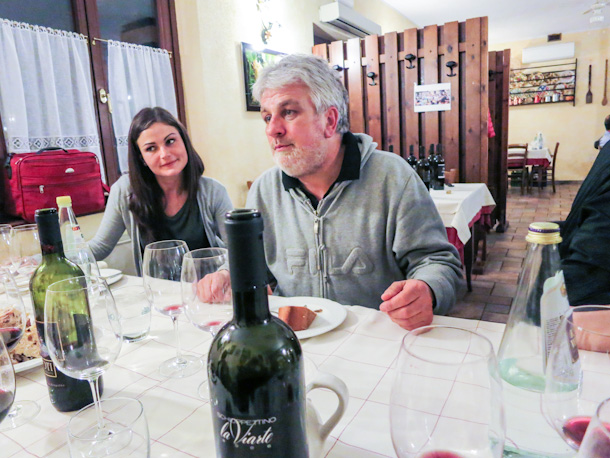 Dino Persello. Also at the Schioppettino producers dinner, local scholar Dino Persello gave a talk (in Friulian, translated by his daughter, Lara) about Friulian language and culture. He spoke passionately and openly about the culture and character of the Friulian people. He noted, among many other things, that historic upheavals in this area have created a suspicion of outsiders among the Friulian people. We’ll have to take Dino’s word on this one because the COF2012 bloggers only experienced the highest level of sincere welcome and friendliness in our week in Friuli! 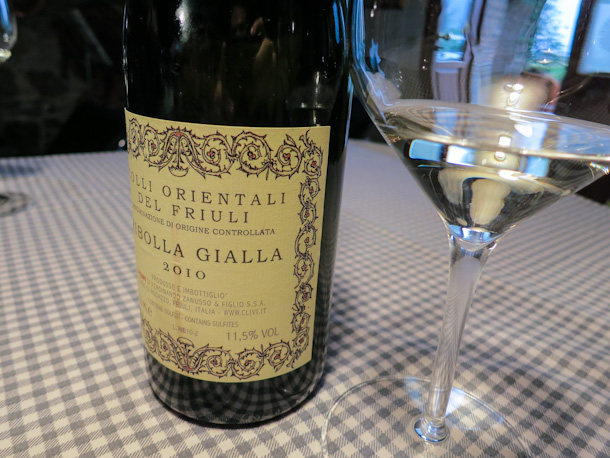 I Clivi Ribolla Gialla 2010. There were only a handful of wines that really surprised me (and I think the group) over our week in Friuli. These were wines that were so distinctive and original that we were left staring in awe at the bottom of our wine glass. One of these wines was the 2010 Ribolla Gialla produced by the I Clivi vineyard. Color? Wine don’t need no color! This Ribolla was almost clear and offered a sledgehammer minerality with eye-squinching saltiness and a hint of citrus. There was something wonderfully pure and uncompromising about this Ribolla. My compatriot Whitney characterized it as an “espresso shot to the palate“; Stuart George called it (in the best sense of the word, I think) “brackish.” 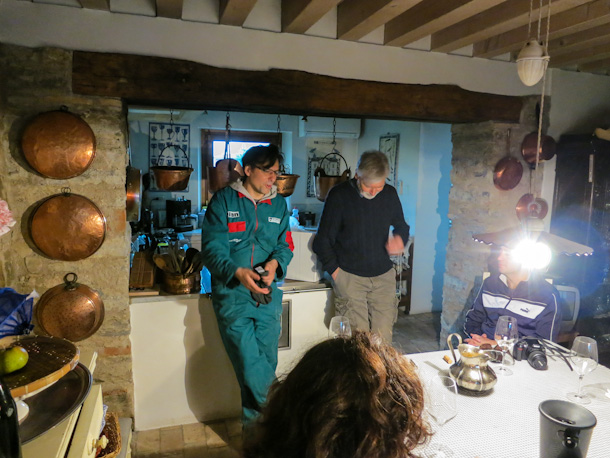 I Clivi father and son

I Clivi father and son. It’s a cliché that the character of a winemaker is expressed in his or her wines. It makes for a great story, if you can make the connection, which doesn’t happen often. But Ferdinando Zanusso and son Mario of I Clivi definitely represent the salty character of the aforementioned Ribolla. As I listened to them talk about their wine, I got the feeling they really just wanted to say, “This is how we choose to make wine; if you don’t like it, you can f*ck off!” I liked that. I want to make them honorary Texans.

Coming up next – Part 3 and the final list of my favorite things in Friuli.