The Soul of Houston: Mama’s Oven 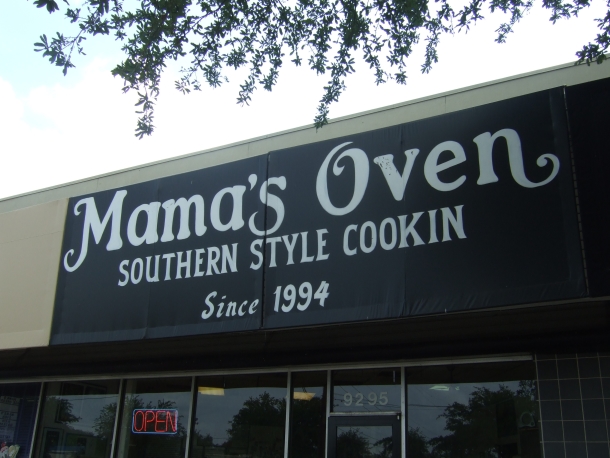 If you grew up in Southeast Texas in the 1970s like I did, you understand the meaning of “the other side of the tracks.” Many towns were divided into the white side and the black side, with railroad tracks in between, and rarely did the populations meet. One exception was in public schools. Even before school integration was mandated, many public school teachers (even in the predominantly white schools) were African-American women.

Both before and immediately after the civil rights legislation of the 1960s, one of the few career opportunities for black women in Southeast Texas was public school teaching. As a kid from the white side of the tracks, I can say that some of the most influential teachers in my public school education were African-American women.

Occasionally, from about third through eighth grades, these teachers would organize a “soul food” day. Soul food, of course, is associated with the cooking of the Southern United States, predominantly related to the cuisine of African-Americans. Typical soul food dishes are black-eyed peas, sweet potatoes, cornbread and oxtails, to name a few. I still have no idea of these soul food days were officially sanctioned — probably not — but the teachers and even some of the students would bring in their best home-cooked soul food for all to try.

For the white kids in the class like myself, raised on a diet of shopping mall fast food and microwaved frozen dinners (back then fast and frozen was “new” and “modern”), this was quite an eye-opener. Fast food most certainly does not have soul. But soul food is comfort food, and even for pre-teen suburban kids, it made a lasting impression. 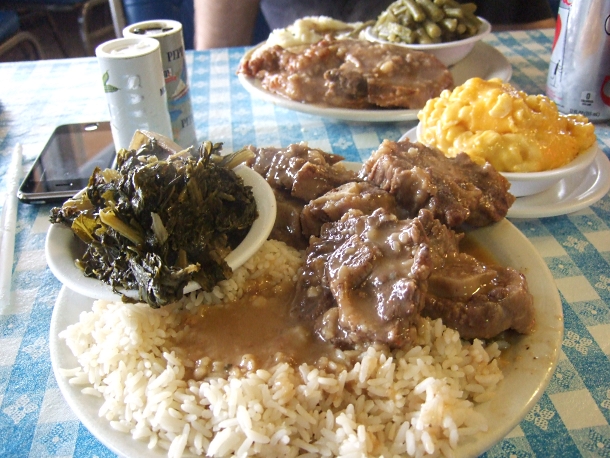 Houston has many soul food restaurants, and although I’ve gotten my fix throughout the years at a few standbys (Davis Meat Market being one), I never really explored this cuisine in Houston. In a city of Tex-Mex, barbecue and burgers, soul food is often overlooked.

I’ve decided that it’s time to explore the numerous soul food restaurants in Houston. My first stop is a little joint on South Main near Reliant Stadium that I’ve driven by many times: Mama’s Oven. Billed as “Southern Style Cookin,” Mama’s Oven has been serving up soul food from this tiny storefront since 1994. I visited for lunch on a recent weekday afternoon.

You order at the counter. There’s a written menu, and a board with some specials, with a steam table where you can check out some of the sides and main dishes. Nothing on the regular menu, either lunch or dinner, is over $10. I ordered a plate of oxtails with rice and 2 sides (mustard greens and macaroni & cheese) for the tidy sum of $9.50, cornbread included. My lunch partner got the smothered pork chop with mashed potatoes and green beans for $7.50. 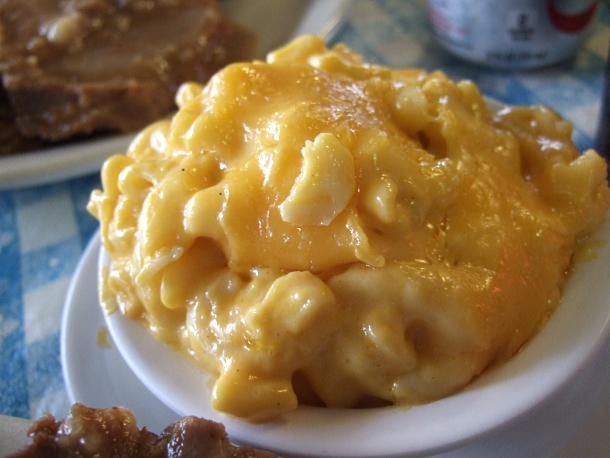 The dining room on this day was mostly full, populated about evenly with white and black patrons, with several people waiting for to-go orders. After ordering, you seat yourself and your food is brought out to you when it’s ready. The food arrived steaming hot in large portions. The oxtails were tender and flavorful in a brown gravy. The mustard greens were some of the best I’ve had in Houston — cooked just enough to get rid of the natural bitterness, but still firm and not too soft, with a light flavor of vinegar. The mac & cheese was a decadent, unapologetic pile of ultra-creamy cheese and macaroni.

We were tempted to get dessert, but my dining companion had never been to Hank’s, the legendary Houston ice cream parlor that’s literally right next door, so we paid our bill and went there for a couple of scoops. Next time, I’ll definitely try the peach cobbler at Mama’s.

Overall, this was a delicious plate of food in large portions, cooked with love and soul, at an incredibly reasonable price. It certainly reminded me of my soul food “education” growing up in Southeast Texas.

2 Responses to The Soul of Houston: Mama’s Oven