A5 Kobe Beef at Vic & Anthony’s

Kobe beef probably isn’t what you think it is. The term “Kobe beef” gets thrown around alot — you see it on some high-end steak house menus in Houston, and more ubiquitously on burger joint menus as a “Kobe burger.” 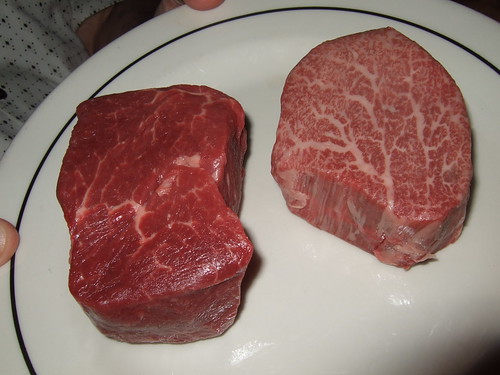 There’s a certain mystique about Kobe beef, vaguely associated with fat, docile cows from Japan that get massaged with sake and force-fed beer through a tube. Though it’s sometimes hard to separate hype from reality — the steak from the sizzle if you will — one thing’s for sure: real Kobe beef is very hard to come by.

Carlos Rodriguez knows this. He’s the Concept Chef (i.e. head honcho) at Vic & Anthony’s in downtown Houston. He’s spent the last three years trying to source the real Kobe beef to serve here in Houston. Problem is, what limited supply there is gets shipped to cities like New York, Los Angeles, Chicago, and Las Vegas. Recently, he was able to work through a broker in New Jersey to have the Kobe beef shipped directly from Japan. This past Friday he started serving a five ounce tenderloin of real Kobe beef for an admittedly eye-popping $130.

Why so expensive? First let’s establish what Kobe beef is and isn’t. Kobe beef is a cut of meat from the Tajima breed of Wagyu cattle that is raised and slaughtered in the Hyogo Prefecture of Japan (the city of Kobe being the capital). The traditions associated with raising cattle in this area of Japan — including feeding the cows beer and massaging them with sake — are supposedly ideal for producing the highest quality beef from Wagyu cattle (the breed itself is genetically predisposed to producing highly marbled beef). It’s this intensive process combined with limited production that makes real Kobe beef scarce, and therefore expensive.

Most of the Kobe beef listed on restaurant menus is actually from Wagyu cattle that were imported to the US and then cross-bred with Angus cattle. Officially, this type of beef is supposed to be labeled as “Kobe-style,”American Kobe,” or “American Wagyu.” Unfortunately, most restaurants do not make the distinction and incorrectly label their beef as Kobe, either through ignorance or willful misrepresentation. 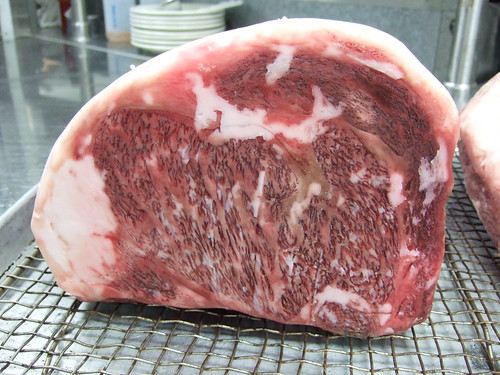 The Kobe beef at Vic & Anthony’s is the real deal. As per the Japan Meat Grading Association, this beef is graded as A5 Kobe beef, the highest grade based mainly on the density of marbling. Rodriguez is currently offering the previously mentioned five ounce tenderloin, and is in the process of dry-aging several large cuts of strip loin. The tenderloins should be available for at least another 10 days, with the strips being offered some time in the next week. The strip steaks will be available in about the same portion size and price. 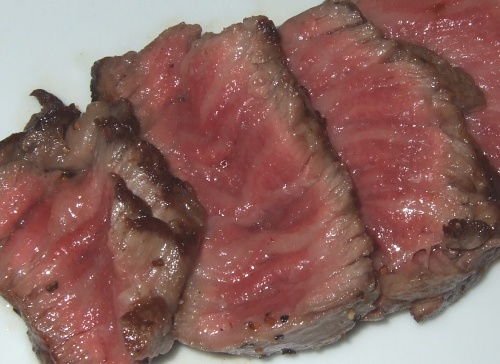 On a recent Tuesday night, myself and a group of fellow steak lovers descended on Vic & Anthony’s for a Kobe beef taste test. We ordered two A5 Kobe tenderloins and two USDA prime tenderloins, both cooked medium-rare. The differences were striking. Texture-wise, the Kobe beef is buttery and velvety, and exceedingly tender. Obviously, the traditional USDA prime tenderloin is tender but much firmer. But the real difference is in the flavor. The only way I can describe the Kobe is to say that this is what beef might taste like if a scientist decided to “perfect” the flavor of beef. The beef flavor is exceedingly refined and concentrated. Due to the marbling and medium-rare preparation, the beef almost melts in your mouth.

Although Rodriguez hopes to offer A5 Kobe beef as a regular menu item in the future, he is currently just testing the waters to see what kind of demand there might be in Houston. For any serious steak lover in Houston, a trip to Vic & Anthony’s to try this rare delicacy is a must (for tasting purposes, you can split a portion among 2-3 people to help with the cost). Plus you’ll be supporting and acknowledging Chef Rodriguez’s prodigious efforts to bring A5 Kobe beef to Houston steak lovers.

9 Responses to A5 Kobe Beef at Vic & Anthony’s