Back in 1995 the “foodie movie of the year” was a little flick called Big Night. Or was it?

That same year, another foodie movie was produced in South Korea. It was called 301/302. The fact that both are foodie movies produced in 1995 is, I can assure you, the only similarity between these films. 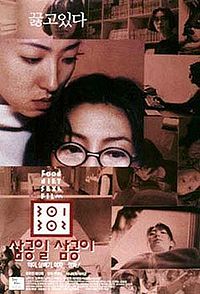 With regard to 301/302, I don’t even know where to start. This is not a warm-and-fuzzy feel-good movie. It is not a date movie. You will laugh during this movie, but not because it is funny. This movie is best watched after drinking several glasses of wine. This is a difficult and disturbing film that only the most dedicated foodie-movie buff should watch. If rated in the US, it would most likely be NC-17. You’ve been warned.

Plot-wise, this is a movie about two women who are obsessed with food in different ways and for different reasons. Beyond that, I really can’t describe the movie any further without giving it away.

Did I like this movie? I did, if only for the fact that it is so completely unexpected, original, and uncompromising. On the downside, I’ll never eat Korean food again.

This entry was posted in Blog Only, Foodie Movies and tagged 301/302, korean movie. Bookmark the permalink.