There’s nothing more painful for a Houston Foodie than to see a promising young restaurant with an identity crisis. Can we help District 7 Grill find itself?

“Zesty food. Zesty life.” That’s the sign that greets visitors entering the parking lot at the midtown location of District 7 Grill. Very promising. To be honest, I had no idea what the name of the restaurant was until I got inside and looked at the menu. I only knew there was a relatively new restaurant in the classic diner-looking building I always see on my way to the office. Stranded on an urban island bounded by Brazos, Pierce, and the Pierce elevated, I knew this location had been the site of various restaurants over the years, all of them diners (I presumed). So when I sat down to a late lunch on a Saturday afternoon, my expectations were immediately challenged by six words at the top of the menu: “The New Age American Urban Cuisine”. Say what? I just want some eggs and taters! 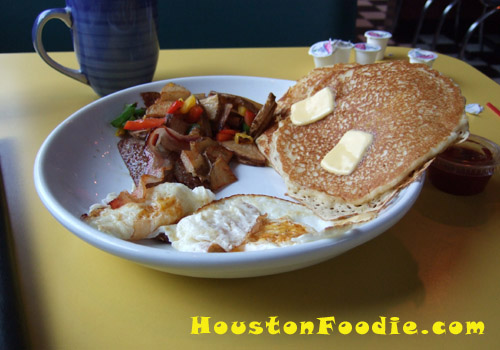 Food/Drink (4/10)
Perusing the menu, I kept asking myself, “Is this a diner”? The building itself, and the black-and-white pictures of old diner restaurants on the walls and menu, would suggest just that. Or is it a “grill” as the name implies? Well the menu laid to rest any doubts: this was indeed “new age American urban cuisine”. Grilled sushi tuna salad with pecans and pesto vinaigrette? Not gonna find that at the Pig Stand (R.I.P.). I chose the most recognizable diner food I could find–pecan pancakes with eggs, sausage, bacon, and “country potatoes”. In other words, eggs and taters.

From the picture above you can see the plating/presentation was a bit…droopy. But tasting is believing, so I dug in. The eggs, ordered over-easy, were small, overcooked, and unseasoned. The breakfast sausage and bacon were tasty and good, if somewhat greasy, but that’s to be expected. The pancakes were thin and dry, with a miserly jumble of chewy pecans cooked into the middle. The individually packaged containers of syrup were scary, but the syrup was edible. The only inedible part of the dish was the “country potatoes”. I never understood the idea of mixing pieces of onions and bell peppers in with breakfast potatoes. Just give me some crunchy, seasoned, shredded taters and I’m happy. But these potatoes were accompanied by dry and bland, yet colorful, pieces of bell peppers. Unfortunately they did nothing to improve the potatoes. I’m not exactly sure how they were prepared, but at some point these mushy chunks of potatoes were fried in oil that must have been days old. They were, unfortunately, inedible. On the bright side, in true diner fashion, the cup of coffee was fresh, strong and hot.

Service (6/10)
The two servers were solicitous, friendly, sincere, and yet somehow distracted. They were doing some type of paperwork, presumably to close out the lunch service. 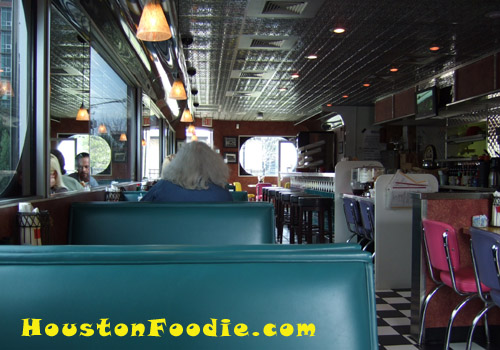 Atmosphere (7/10)
The atmosphere is wonderful. It has a great diner feel, with a counter and kitchen on one side, and bells dinging to alert the servers that the orders are ready. On the other side, a row of booths align along a full wall of windows looking out to a narrow patio and Pierce Street beyond. Catty-corner to the restaurant is the Houston Technology Center which surely provides a built-in clientele during the week. People in technology incubators LOVE TO HAVE MEETINGS, so I imagine a bustling weekday lunch service with aspiring entrepreneurs sketching their best ideas on District 7 Grill napkins.

Value (5/10)
The prices are excellent, but the value is OK. Amazingly there is nothing on the menu over $10. But I would pay a little extra to eat food of a higher quality and prepared with more inspiration.

The Bottom Line (5/10)
So is this diner food, or new age urban something-or-other food? Interestingly, the menu at this midtown location appears to include “diner food” (brunch, breakfast) that is not on the menu at the downtown location. It appears as if the owners carried over their original “new age” menu to this location and then glommed on some diner items. And that would explain the identity crisis. Clearly, the proprietors of District 7 Grill are talented, sincere and successful (with the downtown location). My suggestion is this: a diner is a diner is a diner. Don’t make it out to be anything else. Serve people what they expect from a diner: the freshest, tastiest and most inspired eggs and taters you can make.