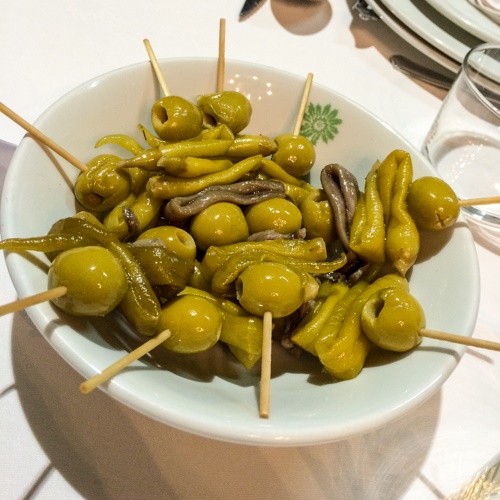 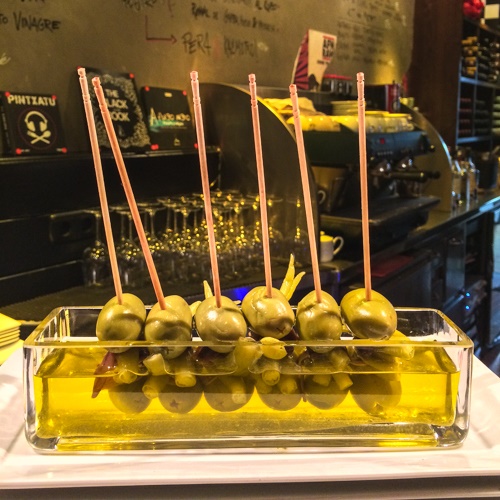 Contemporary Gilda pintxo at A Fuego Negro
The cost of a typical pintxo is three euros, or about four dollars. The architecture of a pintxo is simple – round or square plate topped with an artistically-presented dish combining a few ingredients into exquisitely crafted whole.
Another type of pintxo – the banderilla – involves various ingredients skewered onto a toothpick for easy snacking while standing up (banderilla is actually a bullfighting term for the decorated stick a bullfighter uses to impale bulls on the back and shoulders). Additionally, cazuelitas are pintxos in which small clay bowls are used to bake stew-type dishes.
Indeed, the term “pintxo” (pronounced PIN-cho) is derived from the Spanish word pinchar, meaning to puncture or skewer.
The canonical pintxo of San Sebastian is the Gilda, a toothpick skewered with a salty anchovy, spicy guindilla peppers, and Manzanillo pitted olives. It’s named after the femme fatale character in the American-made movie Gilda, played by Rita Hayworth. During and after the Second World War, bars in San Sebastian featured humble ingredients like local anchovies, pickled peppers and olives. A local denizen skewered all three onto a toothpick and named it after the Hayworth character, because she was “green, salty, and spicy” (verde, salado, picante). At the time, Hayworth was hugely popular in Spain (her father was Spanish). The Gilda became a symbol of the earliest beginnings of the city’s gastronomic and cultural resurgence after the war years, as well as the Spanish embrace of international pop culture, especially cinema.
Rita Hayworth in Gilda
The Gilda, in an infinite number of varieties and interpretations, can still be found in bars throughout San Sebastian.
***
The procedure for ordering food in a pintxo bar can be intimidating for an American. Most bars take on the atmosphere of a Pedro Almodovar movie: a crush of locals with a wine glass in one hand and a small plate in the other shouting over each other, laughing, boisterously elbowing each other out of the way to get the prime place at the bar and all the goodies lined up there. 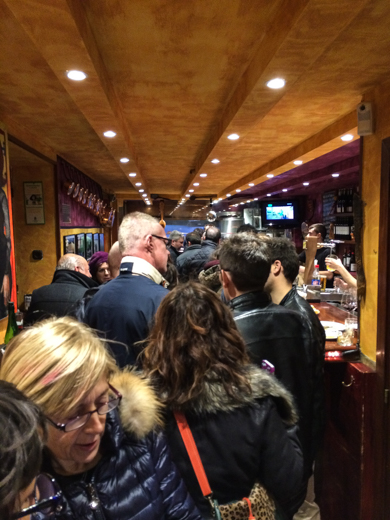 La Cuchara de San Telmo pintxo bar
So here’s the procedure for ordering at a pintxo bar. First, choose a bar. In San Sebastian, in the Parte Vieja, pintxo bars occur more frequently than Starbucks in Manhattan. Most pintxo bars will have a crowd standing out front, everyone with a glass of wine in one hand and a cigarette in the other (no smoking inside! If you have traveled in Spain over the last few decades, you understand the momentousness of the smoking ban). Wade through the first wave of locals and enter the bar. Now you’ll hit the second wall of locals, with a phalanx of bodies 4-5 deep. If you peek through the masses, you will see a bar laden with every imaginable kind of culinary goodness: small plates lined up with pork, fresh local veggies, foie gras and beef. And yet it’s so far away. It’s at this point that every intuition as an American must be denied: calmly waiting in line anywhere in Europe will get you nowhere.
Elbow your way to the bar and get the bartender’s attention. Order a bottle or glass of wine, then start pointing to plates on the bar. The bartender will scoop them up and start passing them to you with the wine. At this point, fade back out of the scrum to a safe place in the back of the bar. You can wade back in to the bar for more plates or wine. Sometimes you will know what you are eating, sometimes not. Asking a friendly local helps.
Another option is to order off the chalkboard menu, like at Borda Berri or A Fuego Negro. Sometimes there are tables in the bar area, and if you can snag one, it’s easy to sit down and start pointing to items on the menu. There’s usually a separate waiter working these tables. At the end of the whole experience, you hand-sign the numbers of plates you’ve had and the amount of wine, and then the bartender will add it up for you. You have to love any culture that works on the honor system. 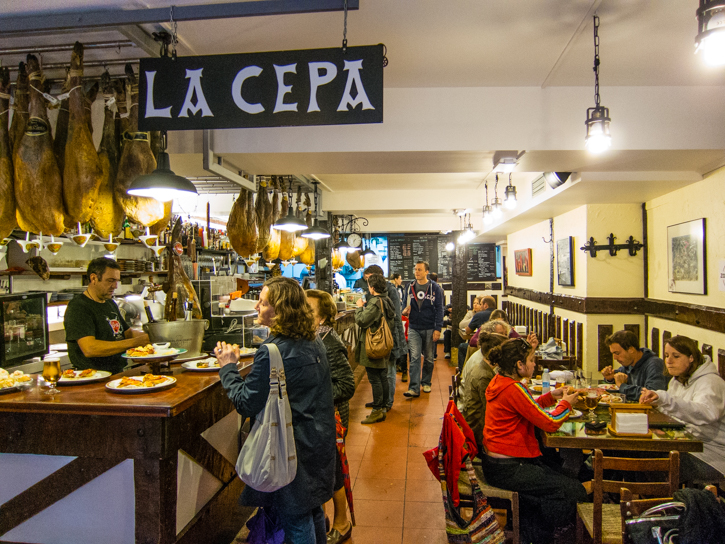 Bar La Cepa
The next stop on our txiketeo took us to the other end of Parte Vieja and a traditional bar known as La Cepa. The ubiquitous crowd of locals was here, as well as a long bar filled with plates of pintxos, a ceiling covered with whole legs of jamon, and blackboard filled with no less than 80 different menu items. Fortunately, we were here for one dish only – the classic pimientos rellenos de bacalao, or piquillo peppers stuffed with salt cod. The spicy sweetness of the peppers combined with the salty earthiness of the cod is a classic flavor combination and prized comfort food. Salt cod, along with its cousin hake, has a long tradition in the Basque country – the Basques have been prolific mariners and fishermen since ancient times – and we’d see it on every menu and in many different preparations, both humble and fancy.
Prev: 6. Tamborrada | 7. Pintxos | Next: 8/10. Gastronomika
Published 9 October 2016 – © J.C. Reid, Texas