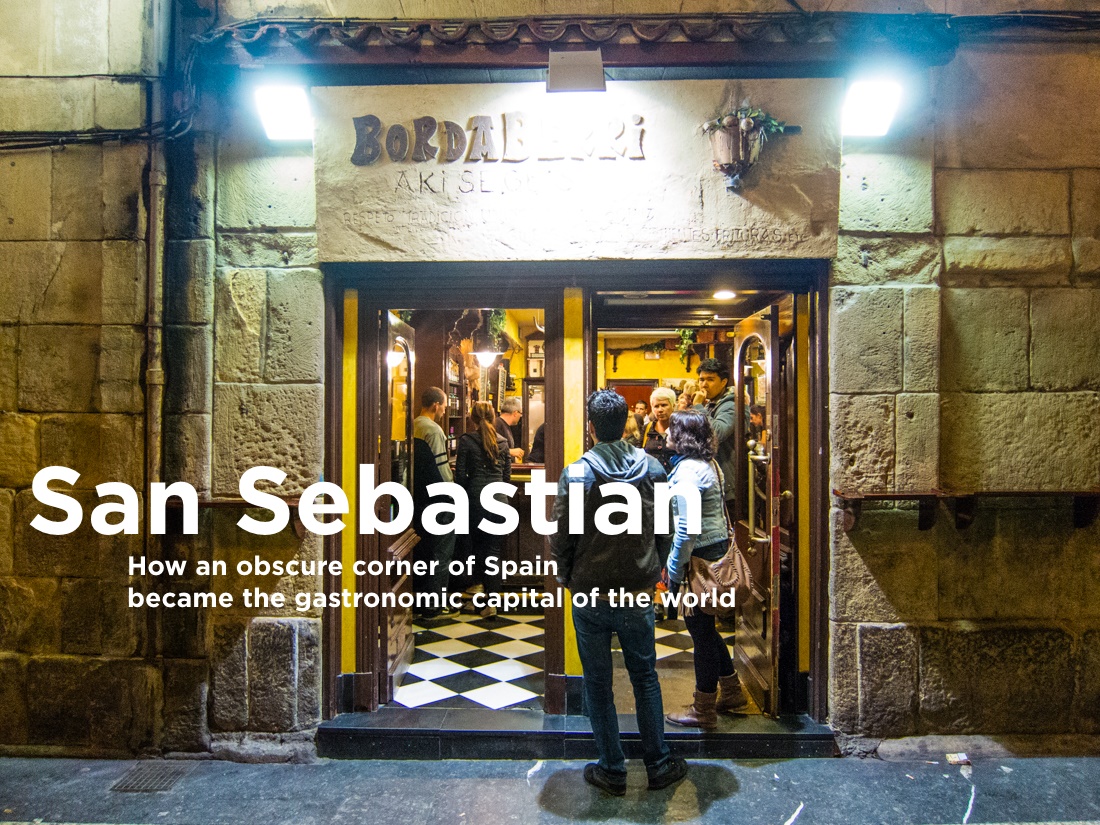 If you’re ever in the company of well-traveled friends and want to stir up some debate, you might ask the question, “What’s the world’s greatest food city?”
There will be a contingent partial to the great cities of Asia – insisting that the likes of Hong Kong, Singapore and Saigon are all worthy contenders, all excellent suggestions based on the dizzying, delicious array of street foods available in those cities.
Then there will be the partisans of high-end dining who might say, “Wait, what about all those great international cities drenched with Michelin-starred restaurants?” And they’d be right, too – Paris (there is still some luster there), London, Tokyo and New York are often mentioned among this group.
And perhaps the most reasonable, and probably the most sober, of the group will suggest what is in fact the best way to rank a world-class food city: it’s a place where the quality and creativity of the food is outstanding across the whole spectrum of cuisines from simple street food all the way up to the Michelin-starred temples of gastronomy.
Additionally, it could be argued, the city should have such an ingrained food culture that you can walk into virtually any restaurant and get world-class food and wine; in other words, it’s not good enough for a city to have a few or even many examples of stellar cuisine if the city is otherwise saturated with fast food chains and mediocre mom-and-pop shops. 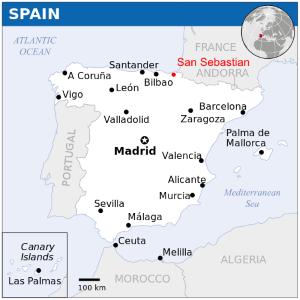 And if your well-traveled friends agree on these conditions and if one of them has traveled to the farthest reaches of northeastern Spain, in the baffling and mesmerizing region known as the Basque Country, that friend will proclaim that the world’s greatest food city is in fact San Sebastian, Spain. And that friend would be right.
***
Borda Berri is a tiny sliver of a bar in the Parte Vieja, or old town, of San Sebastian. In the local Basque language, borda berri roughly translates to “new place” and is indicative of owners who left a legendary local restaurant called La Cuchara de San Telmo to start their own place. There are no seats at Borda Berri – just a long bar with a few feet of standing room on a checkerboard-patterned floor surrounded by cream-colored walls covered in old photographs that evoke the feel of a Parisian bistro. 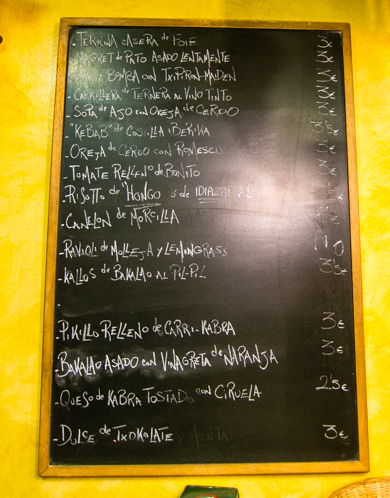 Borda Berri menu
Borda Berri specializes in contemporary pintxos – the Basque equivalent of Spanish tapas, or small plates meant for sharing, that are the culinary currency in San Sebastian. Here, pintxos have been elevated to a high art form where chefs mix-and-match ingredients from a rich bounty of meat, seafood, and produce to create edible and delicious flavor experiments.
There’s no printed menu here, just a chalkboard with a listing of that day’s creations. Borda Berri is known for dishes that combine local ingredients and traditions with a contemporary sensibility in technique and presentation. We tried the risotto de idiazabal – a classic, perfectly al dente risotto in a creamy sauce made from the local Idiazabal cheese. There’s a hongo (mushroom) version of the risotto, too. The canelon de morcilla is a flap of pasta stuffed with the fragrant, earthy blood sausage found throughout Spain and the Basque Country. The carrillera de ternera al vino tinto is a plump, prodigious chunk of veal cheek basting in a rich red wine sauce.
But the specialty here is the oreja de cerdo con romesco, or pig ear in a romesco sauce. An extravagantly rich chunk of crispy-on-the-outside pig’s ear coated in a spicy romesco sauce and finished with the green chimichurri sauce that’s a de facto condiment here at Borda Berri. 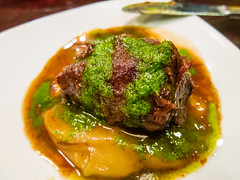 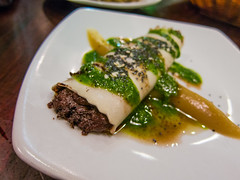 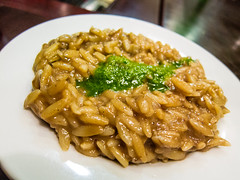 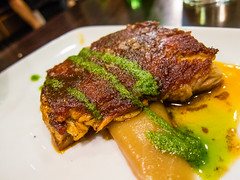 Oreja de cerdo con romesco
The sign in front of Borda Berri states Respeto y tradición unidos en una cocina (Respect and tradition united in the kitchen). And the cooking here reflects this motto. Simple, traditional, and, most importantly, delicious cooking that is respectful of the Basque culture and people. There’s no tourist menu here – most dishes go for three euros or about four dollars.
What’s fascinating is that Borda Berri is, essentially, a typical neighborhood bar in San Sebastian. And yet if you were to transplant Borda Berri into any other Western city it would be considered one of the best restaurants of its kind. And in San Sebastian, there are dozens of bars and restaurants of the same quality as Borda Berri.
1. Borda Berri | Next: 2/10. Cider
Published 3 October 2016 – © J.C. Reid, Texas