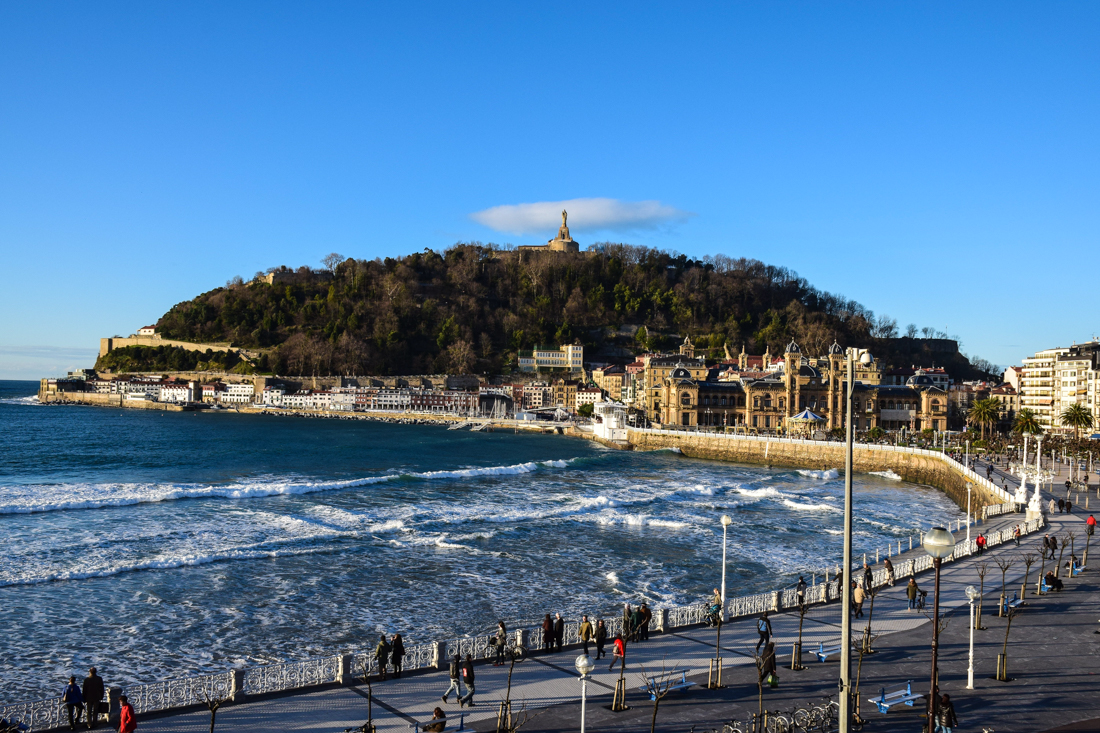 The promenade along La Concha Beach in San Sebastian
One of the more curious urban rituals found throughout the world is the evening stroll.
Citizens of a town or city appear in the main square or street, some dressed to the nines, slowly strolling and people-watching, exchanging gossip and participating in other activities specific to a region or culture. In Victorian England, the promenade allowed men and women of means to show off both status and fashion. The French flâneur of the 19th century embodied the image of the idle intellectual/artist, strolling the streets of Paris to chronicle the experiences of modern life.
The paseo tradition of both Spain and Mexico still exists, featuring families gathering and socializing in public squares, often as a dating ritual for young people under the watchful eyes of nearby parents. In Italy, the passeggiata is a pre-or-postprandial stroll with friends and family, involving lots of window-shopping, flirting, and a taste of espresso or gelato. 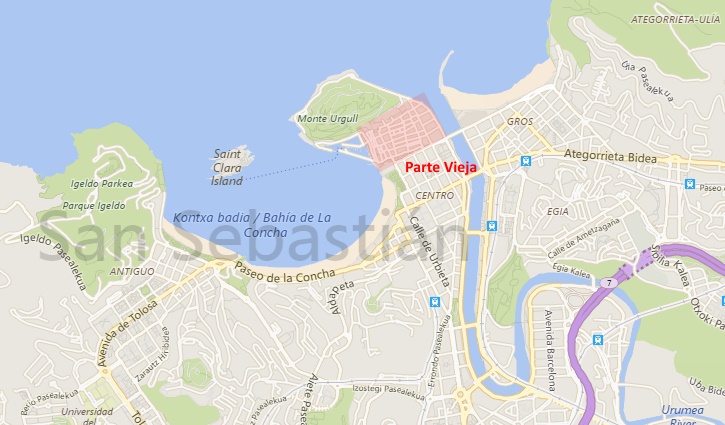 Map of San Sebastian showing Parte Vieja (old city)
In San Sebastian, a Basque version of the evening stroll is the txikiteo or “bar crawl” that donostiarres (citizens of San Sebastian) take among the dozens of pintxo bars and restaurants. As urban environments go, the Parte Vieja is the perfect place to do this – narrow alleys crisscross in a maze of lights, crowd noise, cigarette smoke, music and wafting scents from open kitchens. Some bars are known for certain dishes/ingredients – for instance, the local jamón ibérico, or possibly foie gras, and often the ubiquitous bacalao or salt cod. Also, pintxo bars can be generally categorized into either avant guard (vanguardista in Spanish), contemporary, or traditional cuisine. 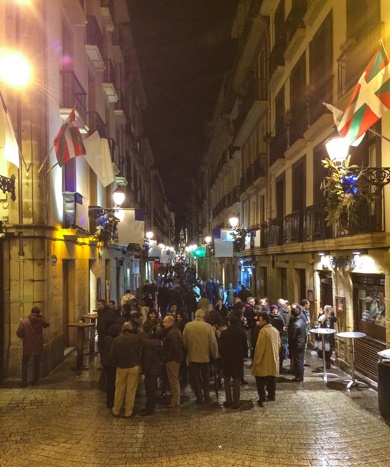 Parte Vieja “bar crawl”
After leaving the contemporary confines of Borda Berri, we continued our own txikiteo at A Fuego Negro, known as one of the more vanguardista bars in town. Under garish lights and colors, we arrived early enough to sit at the bar and gaze in puzzlement at the chalkboard menu. A helpful bartender handed over an English menu.
We ordered a bottle of Txacoli, the local white wine known for low alcohol and a refreshing citrus fizz, poured in a dramatic manner to emphasize the fizziness.
The highlight of the pintxos here was a hunk of local cheese that had been frozen and aerated with liquid nitrogen and topped with dehydrated sardine and herb powder. A classic vanguardista spin on some standard local ingredients. It was light – almost the texture of snow powder. Placing it in my mouth, it immediately dissolved from a cold, crystalline texture to a liquid that managed to combine all the flavors into a coherent “dish.” This was some of the most thoughtful and creative “street food” we’d ever experienced. 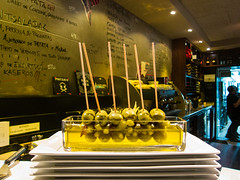 A Fuego Negro - The (contemporary) Gilda 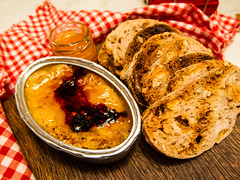 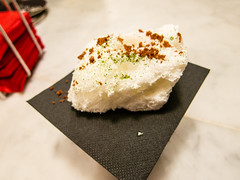 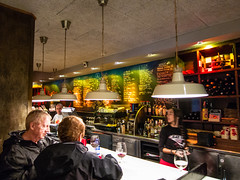 A Fuego Negro - bar and menu
There’s clearly a competitive spirit among the bars of the Parte Vieja. And it’s not primarily economic – there’s an ongoing attempt to one-up other bars in culinary creativity, to produce things that are both delicious and exceptional. This competition is formalized every year in the Campeonato de Euskal Herria de Pintxos, or the Basque Country Pintxo Championship, one of the most popular and fiercely contested events for local chefs.
And in a much larger context, there’s clearly a sense of competitiveness and exceptionalism among the Basque people as a whole – a sense that they are different from the cultures that surround and contain them. And in fact they are, in most every conceivable way.
Prev: 2. Cider | 3. Txikiteo | Next: 4/10. The Basques
Published 5 October 2016 – © J.C. Reid, Texas