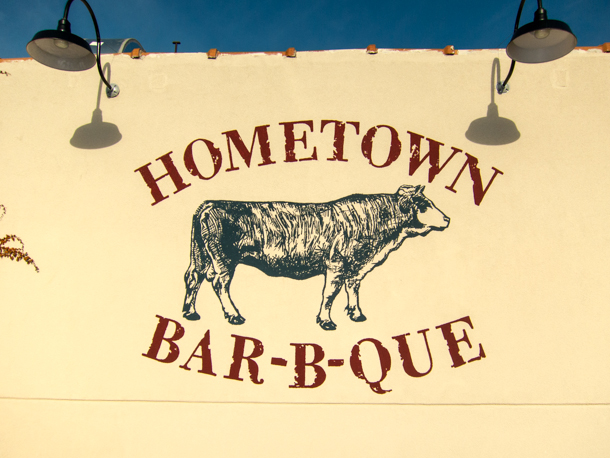 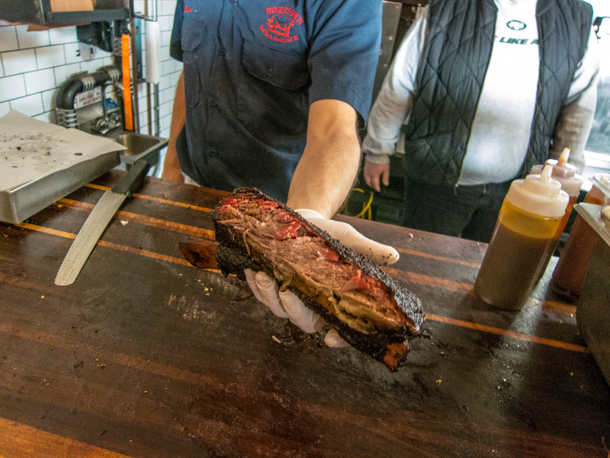 Billy Durney’s family has roots in Red Hook. Both of his grandmothers – after they immigrated from Norway and Ireland – settled in Red Hook. He considers it his hometown (along with New York City). Durney spent most of his career traveling the U.S. and the world as a private bodyguard. In those travels, he came to love barbecue – its flavors, smells, traditions, and culture. Eventually, he decided to take the leap and open his own barbecue joint in Red Hook. He partnered with New York restaurateur Christopher Miller and Hometown Bar-B-Que was born. 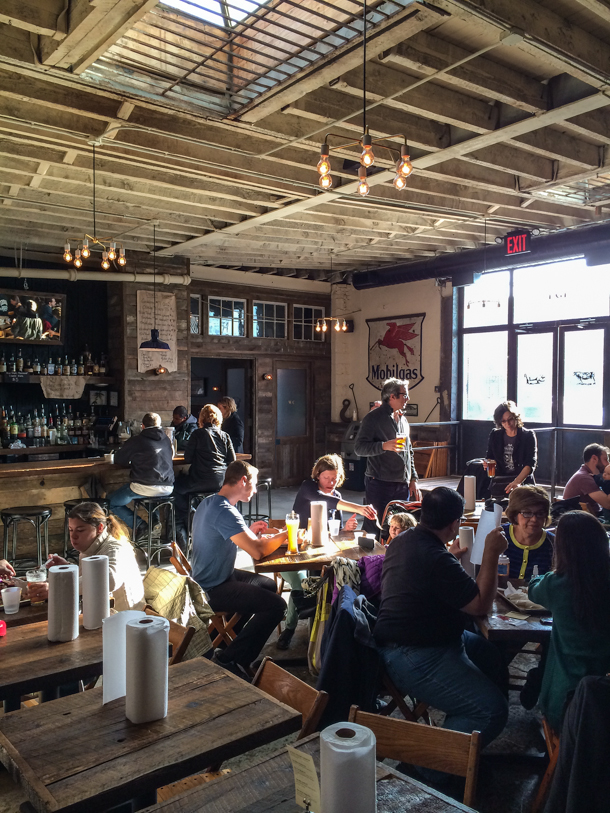 It was propitious timing. As a cuisine, barbecue was taking off in New York. Especially Texas-style barbecue. Things had changed dramatically since I first reported on it in 2012. Daniel Delaney would start smoking Texas-style barbecue for takeout and as a popup restaurant. He would eventually open a brick-and-mortar joint – Delaney Barbecue – in Williamsburg. Other Texas-influenced joints like Morgan’s and Fletcher’s would follow suit. 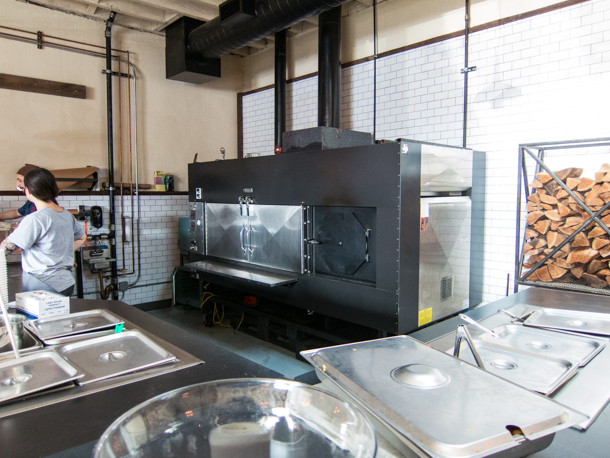 Durney, too, would lean toward a Texas influence in his barbecue. As with Delaney, one of Texas’ most revered pitmasters would have a hand in this development. Delaney famously had his come-to-Jesus barbecue moment at the Road Food Festival in New Orleans when he first tasted Wayne Mueller’s barbecue there. Similarly, Durney met Wayne at a barbecue class at 17th St Bar & Grill in Murphysboro, Illinois. Durney would eventually make the pilgrimage to Taylor, Texas to train with Wayne at Louie Mueller Barbecue. The influence of Wayne Mueller in the Brooklyn barbecue scene is undeniable. 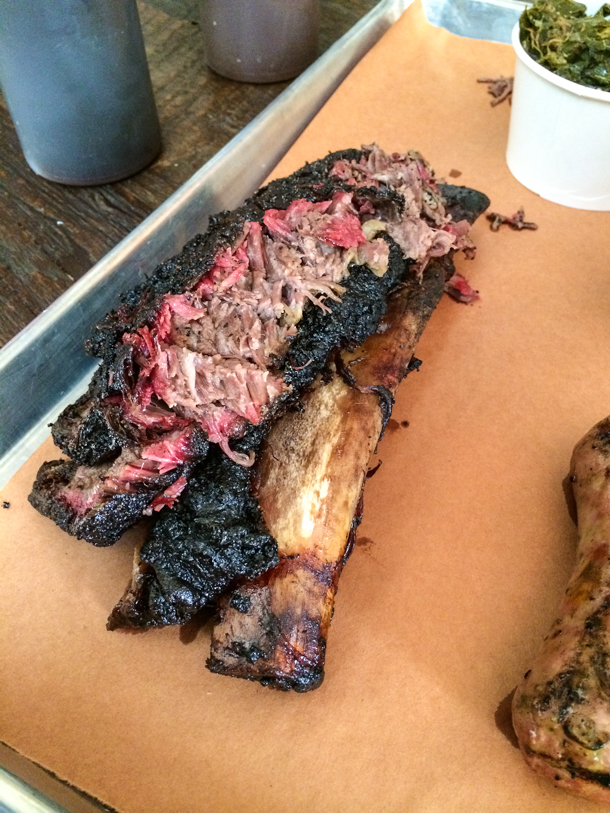 Hometown Bar-B-Que is a temple to Texas barbecue if there ever was one. It’s a huge building right near the shoreline in Red Hook. Not-so-propitiously, soon after construction started, Hurricane Sandy blew right over Red Hook. Construction was set back several months. Hometown officially opened on 12 September 2013. 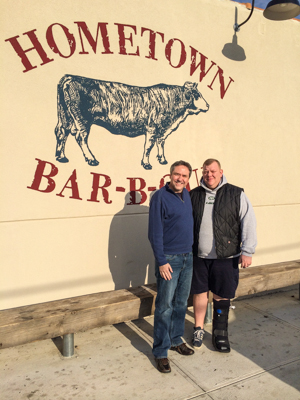 The space itself is beautifully renovated. The main dining room is dominated by a mammoth Ole Hickory smoker – it looks like an SSE model – and a counter for ordering. Along another wall is a traditional bar for ordering beers (lots on tap) and other drinks.

On the day I visited, they were serving a limited menu for lunch. But that included one of their Louie Mueller-inspired beef ribs. This was definitely one of the best beef ribs I’ve tried outside of Texas. Wayne’s influence was easily seen and tasted in the salt-and-pepper crust and deep smoke flavor.

There is also an excellent selection of side dishes and barbecue sauces, if you choose to go that route. And it seems like many people do. On this day (a Sunday lunch), the dining room was mostly filled with what looked to be neighborhood families. Sandwiches, sides and pints of beer seemed to be the chosen menu. A full barbecue menu – moist and lean brisket, jalapeno & cheddar sausage, baby-back ribs, etc. – is available for dinner. There’s also a smaller side bar area for watching football games and listening to live music in the evenings.

As we sat down for lunch, Durney came by for a chat. He is clearly passionate about barbecue and has big plans for Hometown. In addition to the Ole Hickory, he also cooks from a trailer unit a few blocks away. In addition to that, he’s building a separate smoker complex in the same area.

After lunch, we made the five minute walk down to a pier overlooking Governor’s Island and the Statue of Liberty. There, in the parking lot of a building that houses the Red Hook Winery and Steve’s Authentic Key Lime pies, sits a Lang 60″ Deluxe trailer smoker. One of Hometown’s pitmasters was tending to that evening’s smoked meats.

A few feet away, adjacent to the parking lot, a concrete plinth had just been completed. Shipping containers outfitted with smoker equipment would soon be brought and placed here to round out Hometown’s smoking capacity.

As a long-time Texas barbecue lover, it’s almost surreal to see these big Texas-style barbecue operations open up in Brooklyn. But the essence is still there. A lot of passionate, talented, hard-working people are doing what they love and making their customers happy. You can never exactly duplicate the decades of barbecue tradition in places like Louie Mueller in Taylor, Texas. But Brooklyn, and especially Red Hook and Williamsburg, bring their own unique and eccentric traditions to the table. Texas just adds the flavor.