2013 Boudin Cook-Off in Lafayette, LA. Click above for larger image, then scroll left-right to see it all.

One of the very nicest things about living in Houston is that you can jump in the car, drive a few hours in any direction, and feel like you’re in a totally different place with a totally different cuisine. An hour south and you’re in Galveston with a comfortable-if-not-quite-picturesque coastline and a diverse selection of Gulf seafood. A couple of hours northwest and you’re approaching the Hill Country and Central Texas barbecue. And three hours due east, “on the other side of the Sabine River” as my Southeast Texas friends call Southwest Louisiana (SWLA), is an endlessly fascinating place called Cajun country, with a highly prized dish known as boudin.

Boudin is, of course, a type of sausage or link made of more-or-less equal parts pig, rice and various vegetables, herbs and spices. It is a throwback to the sausage-making skills of the French/Acadian ancestors who settled in this area. It is very much a part of this place which is historically poor, and limited to an abundance of a few basic ingredients, especially pigs and rice (seafood too). Like other “peasant” dishes, boudin was a way to use the less-desirable parts of the animal – organs, offal, etc. – in an economical and delicious way. It is one of those special dishes that is simple yet complex – anybody can make it, using innumerable permutations of a few ingredients, to their own taste or to their family’s tradition.

Boudin is often associated with slaughterhouses, where whole pigs and other animals are processed into cuts of meat. There aren’t a lot of independent slaughterhouses left in this part of the country (or any part of the country). A lot of the boudin now comes from meat markets and grocery stores which procure the cuts of meat from big processors for retail sale. Certain meat markets become famous for a certain style of boudin, becoming the focus of fervent arguments among boudin connoisseurs about which is best. 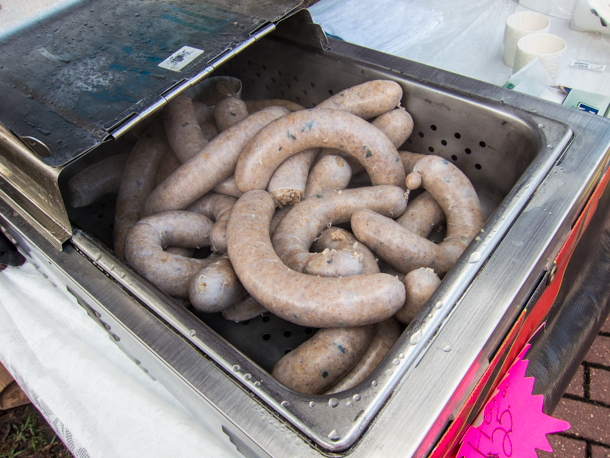 Boudin is the ultimate comfort food, and it elicits a visceral loyalty among the people who seek it out. It is delicious – combining a deep flavor of pork and pork fat (sometimes pork blood) with the grain-y quality of rice, and some type of herbacious or pungent element from the “holy trinity” of celery, onions and bell peppers, as well as other ingredients like parsley, garlic, paprika, or cayenne. It’s worth noting that there are distinct boudin styles on each side of the Sabine. Texas boudin has a far greater proportion of rice to meat, while Louisiana boudin contains more meat, fat, and/or blood giving it a more creamy consistency. Boudin links are usually poached or smoked.

“Boudin runs” over the border are often hit-or-miss. There are the famous places that are always open, but the real game is to search out the slaughterhouses and meat markets hidden in the rice/crawfish fields and swamps along I-10 as it crosses SWLA. Most of these places are obsessively documented, so we know where they are, but we don’t always know when they’ll be open. After an hour’s detour through the swamps (thanks GPS!) you will often roll up on a slaughterhouse with a literal “gone fishing” signed tacked to a closed door.

2013 Boudin Cook-Off in Lafayette, LA. Click above for larger image, then scroll left-right to see it all.

So it was with great interest that I learned of this year’s Boudin Cook-Off. Having a selection of SWLA’s best boudin makers in one place at one time would be a tasty windfall for any self-respecting boudin aficionado. The event took place at Parc Sans Souci in downtown Lafayette. About 18 boudin vendors had set up tents around the park. The Cook-Off started with a “Blessing of the Boudin” by Rev. Bryce Sibley from Our Lady of Wisdom Catholic Church. Tickets were procured which provided samples of boudin from each vendor. Samples were about $.60 each – a great deal. We arrived right when it started and had our fill of of great boudin by the time the big crowds started to roll in.

The annual Boudin Cook-Off is organized by Robert Carriker, the brains and stomach behind BoudinLink.com, the undisputed source for all things boudin. It’s an exhaustive documentation of all boudin makers in SWLA and beyond, with grades for each maker (I’ve found the grades to be quite accurate). I’d never met Carriker before, but as a fellow festival organizer, I can usually spot the guy/gal in charge. And in fact Carriker walked with the furious pace of the festival organizer who spends hours putting out fire after fire. The explorer hat with plastic boudin links strapped to the top was another giveaway. I flagged Carriker down and he graciously stopped for a quick conversation about the differences between Texas and Louisiana boudin. Discovering I was a food writer from Houston, he even offered me a slot as a judge in some later judging rounds – but I had to decline as we were scheduled to leave early to make it back to Houston that evening.

The Cook-Off was well-organized, the weather turned out great, the people were friendly (as they inevitably are in Cajun Country), and the boudin was fantastic. There were some names recognizable to boudin-runners: Johnson’s Boucaniere, Early’s Cajun Supermarket, T-Boys Boudin (one of the few remaining slaughterhouses). One name missing was Don’s Meat Market – the famous operation from Scott, Louisiana just down the road. Turns out Don’s was having their 20th anniversary on the same day, so couldn’t make the cook-off. As boudin has become more famous and much more of a tourist draw, the rivalry between Scott and Lafayette for boudin supremacy has heated up. Scott even managed to get some state politicians to name it the boudin capital of Louisiana, much to the chagrin, I’m sure, of Lafayette. That said, there’s plenty of boudin fame to go around. 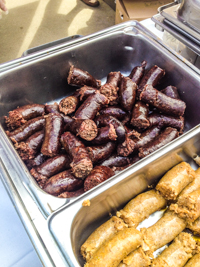 I’m not a huge fan of the Cook-Off format, especially when there is a “people’s choice.” The results of the people’s choice usually align with the marketing skills, rather than the cooking skills, of the vendors. Such was the case here, as T-Boys brought some strong campaigning for people’s choice and eventually won first place. Their boudin was good, but not my favorite. My favorite boudin came from two places I had never heard of.

The smoked boudin rouge (blood-flavored) from T-Jim’s in Cottonport was fantastic. Blood-based food like boudin rouge is both delicious and fascinating. Even today, there’s a subtle taboo about food made with animal blood. I tried to chat up the owner about his methods, but perhaps thinking I was an undercover PETA supporter with a hidden camera, he was tight-lipped (but very friendly).

For traditional boudin, I thought Sonnier’s from Lake Charles was the best (the official judges disagreed, going with The Boudin Depot). The intense pork flavor with a perfect combination of herbs and spices was transformative. I’ll definitely visit Sonnier’s next time I’m in Lake Chuck – it will be a nice additional stop to the venerable Sausage Link in Sulphur. 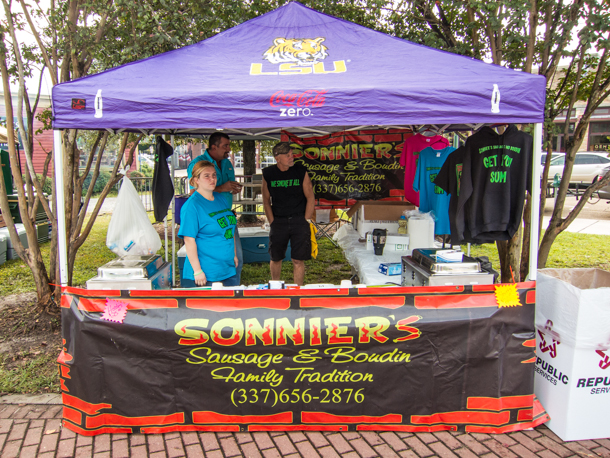 I’ll be back for the 2014 Boudin Cook-Off. The event was great, Lafayette is a fun and booming city (flush with offshore oil money), and the “temptations” of Lake Charles are just down the road.

A few random observations about the trip to Lafayette: 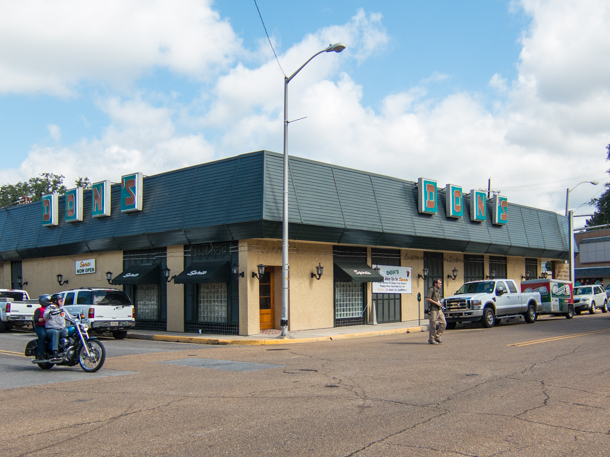