The Places in Between: Friuli-Venezia Giulia, Italy

If you’ve ever had the opportunity to travel to a foreign country more than once, then you may understand the phrase “the places in between.” When you first visit a foreign country there are the “places you must visit.” In preparation for my first visit to Italy, I bought a big Michelin map for Italy (this was long before GPS and Google Maps). These maps were fun to look at and yet frustratingly hard to use – when you unfolded them they were as long as two seats in a plane or train compartment.

They were great for meeting your seatmate – not only were they impossible to ignore when unfolded, but as any seasoned traveler knows, the best way to meet locals is to stare puzzlingly at a map in a foreign country. Usually, I’d guess about 5 minutes is the average, a local will walk up and say something in the local language and point to the map. I wouldn’t know exactly what they said, but I knew it was along the lines of “Do you need assistance?”

So on this shiny new map I circled in red magic marker Milan, Venice, Florence and Rome – the places, as an architecture student – you must visit. And over the next ten years I visited all of those places numerous times. Over those years, as I traveled between these places, my seatmates – their annoyance at my unwieldy map tempered by an innate desire to tell a foreigner about their country – would grab my magic marker and circle places in between the places I must visit. The places in between refer to those places devoid of tourists and ignored by guidebooks that are in their own way more interesting than the places you must visit.

The world is full of jolly places but these do not interest me at all. I hate vacations and luxurious hotels are no fun to read about. I want to read about the miserable, or difficult, or inhospitable places; the forbidden cities and the back roads: as long as they exist the travel book will have value.

One of these places circled on my map of Italy many years ago is a city called Trieste. It is by no means forbidden or miserable (except, perhaps, when the fierce Bora, or windstorm, blows off the Adriatic), but it is definitely on the back roads – in the very far northeast corner of Italy. I would eventually make it to Trieste; but only during a stopover to change trains on a journey from Venice to Istanbul, Turkey (you changed from the slick Italian trains to the creaky trains of then-Yugoslavia, just across the border).

At the time I thought Venice was the farthest outpost of northeastern Italy, so the short eastward journey by train to Trieste, through an unknown land in between, caught my attention. This land is a region of Italy known as Friuli-Venezia Giulia. I never made it back to Trieste, or to this interesting land in between, but I circled it on my map.

So it was with great interest that I received an invitation from my friend Jeremy Parzen – a scholar of Italian history, culture and language and an eminent wine writer and consultant – to join a sponsored trip to the Colli Orientali del Friuli (the Eastern Hills of Friuli) winemaking region in Friuli-Venezia Giulia. I didn’t know a lot about the wines of Friuli, but I did remember my circled map from many years ago, and I immediately said yes. 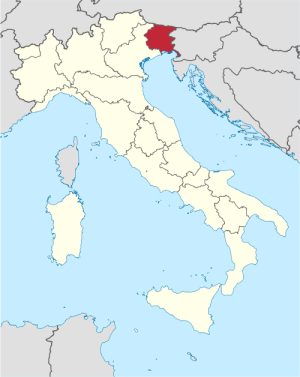 I dug the map out of an old box of travel souvenirs and started researching. Friuli-Venezia Giulia is one of the most geographically and historically complex areas of Italy. It sits in between the Veneto region to the west and a mountainous (the Julian Alps) border of Slovenia to the east. To the north is a mountainous (the Carnic Alps) border with Austria. To the south is the Adriatic Sea.

The many-layered complexity of this area is well-represented in the name itself – Friuli-Venezia Giulia. The name “Fruili” is said to refer to the founding of the contemporary city of Cividale del Friuli. It was here that Julius Caesar established an outpost of the Roman Empire – known then as Forum Iulii – which, among other uses, acted as a buffer between the Roman Empire and the barbarians of Eastern Europe.

The name “Venezia Giulia” refers both to the later influence of the Venetian Empire which lorded over this region, as well as the pan-national geographic designation of the area that encompasses eastern-most Italy (Gorizia and Trieste), the Julian Alps of Slovenia and the Istrian peninsula of Croatia (collectively known as the Julian March).

Winemaking in this region can be traced back to pre-Roman times. Still, as Italian wine regions go, Friuli (as I’ll call the region as a whole) is not as well-known as Tuscany and Piedmont. There are several possible reasons for this. First, Friuli is known as a white wine region and, justifiably or not, even the world-class wines produced here do not (yet) command the media attention of the celebrated reds from Tuscany or Piedmont.

Second, modern winemaking in this region got off to a slow start. During World War I, Friuli was one of the most heavily disputed regions in Europe. Battles between Italy and the Austro-Hungarian Empire took a horrific toll. Both the land and physical infrastructure, not to mention a generation of industrious young Friulian men, were devastated (Ernest Hemingway, fighting as part of an American contingent allied with the Italians, was wounded here and based his book A Farewell to Arms on his experience).

So between the 1920s to the 1960s Friuli suffered la miseria, the misery, as it rebuilt from the war (needless to say, World War II was another devastating intermezzo in the rebuilding). The economy was rebuilt slowly, on small industry, and often family-focused. One of those industries was winemaking. Even today, much of the winemaking in this region is done on small family vineyards. It is well-known that the Friulian character reflects this independence, creativity and industriousness.

By the 1970s, some Friulian farmers (along with their neighbors in Veneto and Trentino-Alto Adige) were sending their grapes to co-ops to be blended into poor-quality, mass-produced white wines destined for expanding markets in the United States. Even to this day, Pinot Grigio wine suffers from a reputation as a light-weight Italian wine favored by supposedly unsophisticated Americans.

But the quality of the wines in Friuli started to improve in the 1980s with better viticultural and winemaking techniques, as well as a generational shift to the children of family vintners who chose to retain the grapes they grew and make their own wine, rather than ship the grapes to a co-op. This shift is most often credited to Friulian winemaker Mario Schiopetto.

Today, Friuli is considered the preeminent white wine area of Italy, and the DOC zone of Colli Orientali del Friuli encompasses (arguably) the largest number high-quality producers in the region. The terroir here is defined by the cooler air flowing from the northern Alps combining with the warmer air flowing up from the Adriatic to form a fertile macroclimate. The land itself is located on the sloping pre-Alpine hills (the “Eastern hills”) between the Julian Alps and the inland plains. The soil, known as “ponca” or “flysch”, is rich in marl that is well suited to the region’s native grape varieties.

What I’ve found in my research of Colli Orientali del Friuli is a wine industry caught between the adversity of recent history and the potential greatness represented in one of Italy’s most unique and least-known wine regions. The consortium that administers the DOC, Il Consorzio Tutela Denominazione Origine Vini Colli Orientali del Friuli, has invited six wine/food/travel writers from the U.S. and the U.K. to visit this region and learn about and taste the wine, meet the winemakers, and ultimately to share the uniqueness of this region with our readers and the wine-buying public. We’ll soon find out if Friuli can balance the unique independence of a “place in between” with the inevitable and deserved recognition of a place we should all visit.

Disclosure: The COF Consortium is paying for my trip to Friuli.

This entry was posted in Blog Only, International Cuisine, Italy, Travel. Bookmark the permalink.

6 Responses to The Places in Between: Friuli-Venezia Giulia, Italy