A Tale of Two Enchiladas 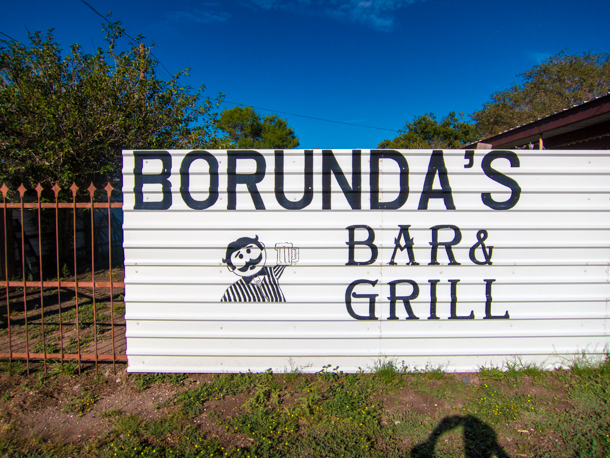 I was in Marfa, that West Texas town where Austin hipsters go to retire and the East Coast jet-set-art-set fly their private planes in for cocktail parties in rundown adobe houses. I pulled into Mando’s, a down-at-the-heels Tex-Mex joint on the main drag and stepped over two mongrel dogs sunning themselves on the steps leading up to the front door. If the quality of a restaurant’s food is measured by the health and chubbiness (or lack thereof) of the dogs “guarding” the entrance, this place was big trouble.

Fortunately, Mando’s turned out serviceable Tex-Mex. It’s one of those old-school Tex-Mex joints found in just about every Texas town; you know the one – interior decor that hasn’t changed since the 1970s and corresponding “Mexican food” sometimes referred to as “gringo-style” in reference to its lack of strong flavor and spice. Such old-school joints are often recognized by cracked leather booths and ornate ironwork, but Mando’s was outfitted with Dairy Queen-style particle board booths and concrete block. Easier for maintenance, I guess.

Ironically, the customer base of Mando’s appeared to be an older generation of Mexican-Americans who, you would think, appreciate “authentic” Mexican food. But in fact it’s the same generation who grew up alongside their Anglo neighbors patronizing “Mexican restaurants” of the 1960s and 70s and evolving a taste for typically bland stuff. Interspersed with older Mexican families were ruddy-faced ranchers in Wrangler jeans and dusty cowboy boots comparing notes on just how much rain that afternoon’s small, isolated desert thunder storm dropped wheel-of-fortune-style on their big, thirsty West Texas land.

I came to Marfa in search of the elusive “flat enchilada.” New Mexicans tsk-tsk at Texans’ cluelessness when it comes to this flat cousin of the rolled enchilada that is the staple menu item of mainstream Tex-Mex. Flat enchiladas have a long tradition in northern Mexico, New Mexico and far West Texas where the epicenter of modern Tex-Mex is ostensibly traced. History suggests that contemporary flat enchiladas can be traced to a Mexican dish known as tortillas enchiladas, that is, tortillas slathered with a red chili sauce, fried and drizzled with cheese.

Presumably, long ago, an enterprising cook somewhere in New Mexico or West Texas decided to stack a few of the tortillas on top of one another, with a layer of cheese in between, bake it, and throw a fried egg on top for good measure. The flat enchilada was born (flat enchiladas also are referred to as stacked enchiladas or enchiladas montadas).

And that’s pretty much the same recipe used today in places like Marfa. A corn tortilla is lightly fried, placed in a baking dish, covered in a red or green chile sauce, a layer of cheese is added, then the process repeated three or four times, lasagna-style. The dish is baked in an oven until the cheese on top gets brown and bubbly, then a fried egg (the runnier-the-better) is stacked on top. Add a side of lettuce and chopped tomatoes, rice and beans, and you’ve got a Tex-Mex classic. 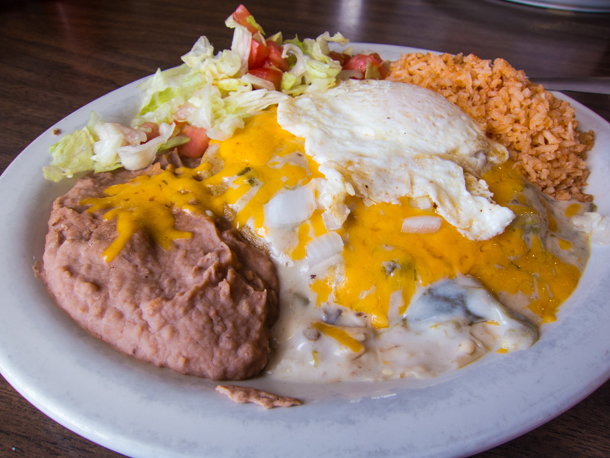 Visually and texturally, flat enchiladas do not inspire confidence. It’s a big plate of gooey-gloppiness; when you cut into it, everything oozes together. The once-crispy tortillas have given-up-the-ghost and dissolved into the amorphous mess. It can be argued that American tastes prefer dishes with some texture – a bit of crunchiness here combined with some gooeyness there. Which may explain the success of rolled enchiladas – a preparation offering both visual and textural compartmentalization of the tortilla’s filling and the gooey sauce and cheese smothering it all.

So how did the flat enchiladas at Mando’s taste? Not bad, overall. It was hatch chile season so I rolled the dice and ordered the green sauce. Alas, no hatch chiles detected. It was all a bit bland, with the cheese providing the preponderance of flavor, but mostly it was a comforting and filling meal.

I ended up at Mando’s because the most famous purveyor of flat enchiladas in Marfa was closed. Pancho Borunda runs Borunda’s Bar & Grill, a two minute drive to the other side of Marfa. His family made flat enchiladas famous back in the early days of Tex-Mex. Turns out he only makes flat enchiladas on Friday nights now. This was a Saturday and he was closed for lunch, but he would open later that afternoon to sell barbecue that he occasionally makes on weekends. I showed up at opening time – 5 p.m. This is a no-frills joint with every square inch of wall covered with local memorabilia, from framed pictures of local high school football teams to movie posters for “Giant“, the famous movie that was filmed near Marfa.

I sidled up to the bar, ordered a Trinity plate (brisket, ribs, sausage) and introduced myself. Introducing yourself to locals in Marfa can be hit-or-miss, usually resulting in a sideways glance through squinty eyes as if they’re sizing you up as a worthy Texan or one of those insufferable East Coast artsy-fartsy types. I told him I was from Houston, expecting some relief from the piercing appraisal. His eyes got narrower. “You been to that old-fashioned Mexican food place in Houston?” he asked. I thought for a second. “You mean El Real?”, I countered, referring to El Real Tex-Mex Cafe, the “vintage Tex-Mex” joint in Montrose that’s kind of a living museum for Tex-Mex dishes. “Yeah, that place”, he responded. Finally, I thought, here’s some common ground. “I’m not too happy about that place”, he continued. I shifted on my bar stool and ordered a beer. Shiner Bock.

“What’s wrong with El Real?” I asked. Pancho explained: “A friend of mine in Houston went there. He said they have a flat enchilada on the menu but they don’t make it right. It’s got pork in it or something. That’s not the recipe.” Pancho should know. A distant relative, Tula Borunda Gutierrez, opened one of the first restaurants in Marfa in 1887 at the corner of Dean and El Paso streets, serving mostly American food to railroad workers and ranchers. She served Mexican food one day a week (some argue this is where the Tex-Mex “combination plate” was born).

Eventually, Pancho’s aunt, Carolina Borunda Humphries, would acquire the restaurant in 1938. By then it had moved to a different building on the same block and renamed The Old Borunda Cafe. Carolina cooked in and managed the restaurant until it closed in 1987. By then, The Old Borunda Cafe was recognized as one of the most influential restaurants in the evolution of the regional American cuisine that came to be known as “Tex-Mex.” Flat enchiladas were a specialty. Today, the building that housed The Old Borunda Cafe still exists as a jewelry store. The kitchen in the back where Carolina Borunda Humphries made so many combination plates and flat enchiladas is now used to make handcrafted soaps. 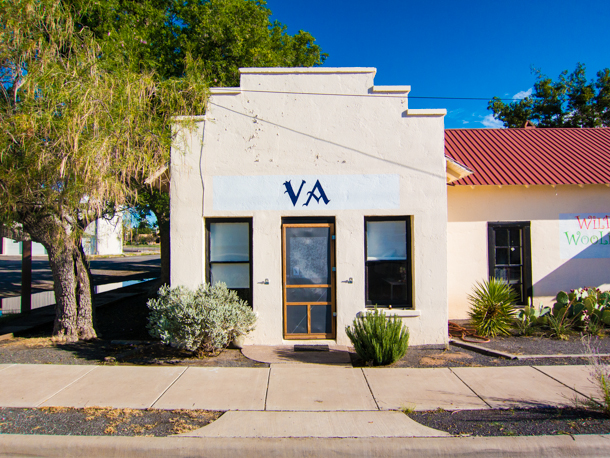 The Borunda family Tex-Mex tradition now lies with Pancho’s Borunda Bar & Grill, whose relatively new building sits on yet another corner of the same block where The Old Borunda Cafe building still exists, along with the now-decrepit building where relative Tula started some 125 years ago. Much like the cuisine of Tex-Mex itself, the Borunda family tradition is changing and evolving. I finished my barbecue plate (some of the best barbecue I’ve had in barbecue-starved West Texas) and told Pancho I’d check out the flat enchiladas at El Real in Houston.

Back in Houston I met food writer Robb Walsh, who oversaw development of the menu at El Real and is a partner in the business with long-time Houston restaurateurs Bryan Caswell and Bill Floyd. I ordered the “Enchiladas Borundas” and settled in to ask Walsh about the provenance of the dish. Years before, Walsh interviewed Pancho Borunda about flat enchiladas for his book The Tex-Mex Cookbook. Walsh convinced Pancho to describe the recipe that his Aunt Carolina made famous at the Old Borunda Cafe (there were no written recipes from that time). Walsh included the recipe for “Old Borunda Stacked Red Chile Enchiladas” in the book.

Indeed the flat enchilada dish at El Real is different from the one I experienced at Mando’s and what Pancho makes at his restaurant. It includes a thick layer of stewed pork on top. I asked Walsh about the discrepancy between the two versions of flat enchiladas. “We tried a few different recipes. The El Real version is based on the original Borunda recipe but made with a red chile and pork sauce similar to the Chile Colorado con Puerco recipe in the book. In taste tests, the pork and red chile sauce was a favorite.” 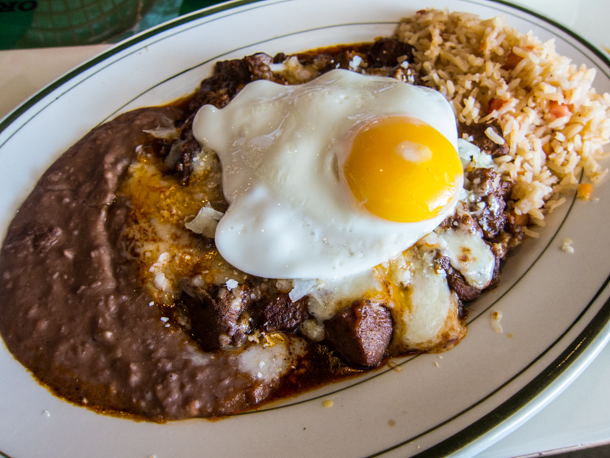 Which makes sense in my experience of the dish. The addition of the stewed pork chunks adds much-needed texture and flavor to a dish that mainstream Tex-Mex lovers may otherwise find too homogeneous. Indeed, the evolution of Tex-Mex has seen many variations of the original flat enchiladas, most notably with the substitution of a green sauce and additional layers of fillings such as chicken or beef.

The flat enchiladas at El Real represent a new evolution of the dish as well as Tex-Mex in general. Walsh and company have taken old Tex-Mex recipes that have devolved into blandness and re-applied traditional techniques that were lost due to shortcuts over the years. Additionally, fresh ingredients are used that are now more readily available than the canned or powdered ingredients that were only available in the 1960s and 70s.

The flat enchiladas have become one of my favorite dishes at El Real. They combine what made the original recipe great – layers of oozing cheese, onions and tortillas – with a deeply flavorful red chile sauce redolent of the guajillo chiles that are imported from Mexico and prepared in a way that coaxes out their natural earthiness and smokiness. Chunks of pork are stewed in the chile sauce until tender but with just enough bite to add much needed texture to the dish.

I plan to return to Marfa soon – on a Friday – to sample Pancho Borunda’s flat enchiladas which, by all accounts, are some of the best anywhere. I’ll probably hang around for more barbecue on Saturday too. I’ll order a Trinity plate and a Shiner Bock and invite Pancho to Houston. The flat enchiladas at El Real may not be exactly like the ones he makes from his Aunt Carolina’s recipe, but they certainly reflect the spirit of this enduring Tex-Mex destination out in Far West Texas.

2 Responses to A Tale of Two Enchiladas