Fried Shrimp with a Side of Texas History 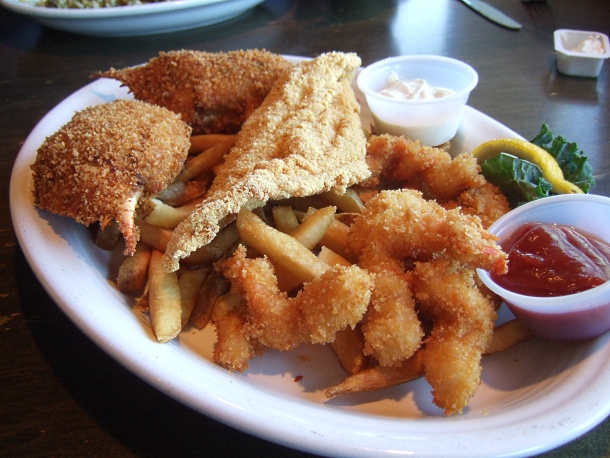 The substance seeps from every crack and crevice of the ground that surrounds the confluence of the San Jacinto River and Buffalo Bayou. The air around here — humid, often filled with mosquitoes and the sound of ship horns – is permeated by it. It’s one of the biggest industries on this patch of land and swampy bayou in far east Houston.

The Lynchburg Ferry has been running almost continuously across Buffalo Bayou (now, the Houston Ship Channel) since 1822. The tiny dozen-car ferries scurry back-and-forth across the channel, dodging and weaving among colossal oil tankers and container ships — every one of which must pass through this narrow strait to get to the refineries and bulk cargo terminals farther up the channel. Think of it as Houston’s own Bosporous Strait, but instead of connecting Europe and Asia it connects Baytown (technically Lynchburg) and La Porte. And although the two channels can’t compare in the sheer sweep of history, they are, at least to Texans, easily matched in historical significance. 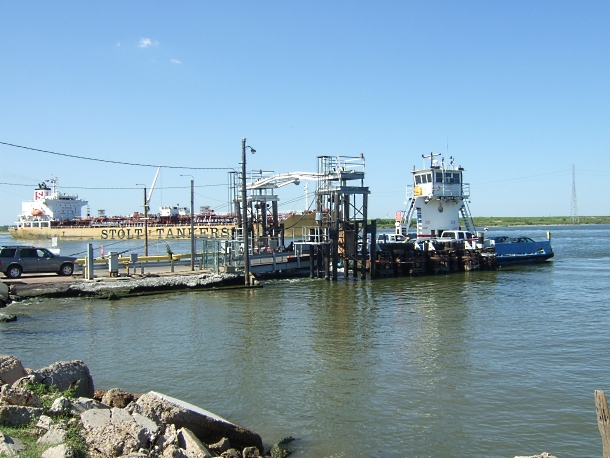 The Lynchburg Ferry prepares to take on tanker traffic

The southern terminus of the ferry is a plot of land best known as staging area for refugees of the “Runaway Scrape” of 1836 – Texian colonists and settlers fleeing north from the advancing Mexican Army led by General Antonio Lopez de Santa Anna. Some 5000 refugees camped and waited for passage across the channel on a small flatboat powered by hand-pulled rope. Reinforcements for General Sam Houston’s gathering army came back in the other direction.

Legend has it that Nathaniel Lynch, the operator of the ferry, raised the crossing price when overwhelmed by the refugees and soldiers, only to lower it again when ad interim President of the Republic of Texas, David G. Burnet, threatened to commandeer the ferry for government service. 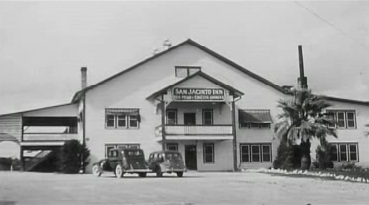 On this same plot of land (4406 Battleground Road) today stands the Monument Inn, a restaurant with its own long and storied history. The tradition of a family-style seafood restaurant in this part of Houston started in 1918 when local resident Jack Sanders and wife Bertha opened the San Jacinto Inn on the north side of the ferry landing. The plentiful catch of the nearby bays and bayous established a tradition that lives on today: all-you-can-eat seafood. The original inn burned down in 1919 and relocated to the south side of the ferry – on land that is now adjacent to the Battleship Texas historical site. Throughout the 1920s, the price of all-you-can-eat seafood was $1, rising to $2 in the 1930s. Another fire in 1927 leveled that building, and a new two-story structure opened and served the area until it closed in 1987. Although primarily known for seafood – especially shrimp – the San Jacinto Inn was also known for fried chicken and biscuits whose recipe is still used today.

In 1974, a new seafood restaurant called the Monument Inn (named, obviously, for the nearby San Jacinto Monument) opened further south down Battleground Road. It was part of a local chain of seafood restaurants owned by restaurateur Richard Tannenbaum that included Atchafalaya River Cafe and at least one other Monument Inn location in the Galleria area. In July of 1990, one of Tannenbaum’s longtime employees, Ann Laws, along with her husband Bob, bought the Monument Inn at 2710 Battleground Road from Tannenbaum for almost $1 million. The restaurant did its normally good business until New Year’s Eve 1990 when the Laws received a late night phone call from an employee that the restaurant was on fire. The fire, accidentally started by a busboy, burned the restaurant to the ground. The Laws had owned it all of six months.

The Laws were determined to rebuild until they realized their insurance only covered $1 million in damages. To rebuild would cost at least $1.5 million. So they turned to Tannenbaum who owned an old restaurant property back up north on Battleground Road that was previously called the Lynchburg Crossing Restaurant. On January 20th, 1991, they leased the building with an option to buy in 5 years (they did eventually buy it and own the property today). After alot of work and remodeling, the new Monument Inn reopened on March 18th. Although they were still paying off the loan on the old site, the new restaurant was a financial success. The Laws had to admit that the new location was a big improvement – the views of the ship channel, ferry and endless parade of ships added to the unique atmosphere of the Monument Inn. 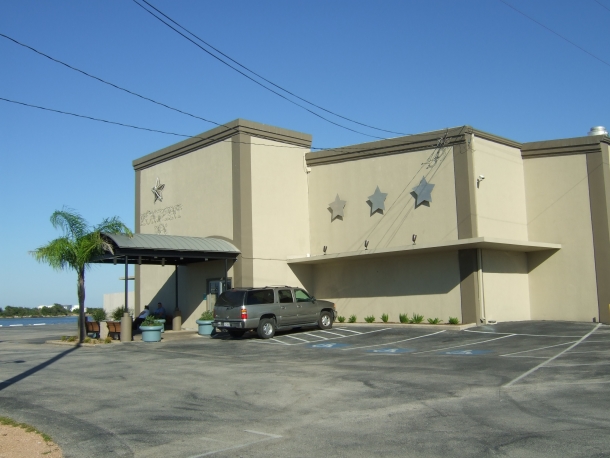 Twenty years later, it’s this same building, on this same historical ground, that still stands and serves customers seven days a week. “We’re still busy and still going strong,” says owner Bob Laws, although he notes the recession has had an effect on business and a tenuous supply of oysters is currently hampering their availability at the restaurant.

The most recent challenge was Hurricane Ike, which damaged the lower part of the building. According to Laws, “The day before Ike, I handed a check to my contractor and told him to be here the day after the storm. The upstairs dining room was open two weeks later when the power came back on, and the lower rooms were open a month later after remodeling.”

On a recent Tuesday evening, the spacious, simply decorated upstairs dining room was about half full and filling up fast. Container ships cruised past just beyond the reach of our booth, and the ferries plied away on their usual, unchanging route. The menu continued the tradition of all-you-can-eat seafood with a $28.95 option that’s billed as “We serve until you say stop!” Cold boiled shrimp, raw oysters (when available), fried just-about-everything (shrimp, catfish, oysters) are all included.

I decided on a fried seafood combination platter – shrimp, catfish and stuffed crab. All excellent with some of the best fried catfish I’ve had recently. My friend got the shrimp étouffée – one of the best versions of this dish I’ve tasted in Houston. Cold beer, a classic iceberg lettuce salad, and a basket of old-school cinnamon rolls completed the dinner.

Standing in the parking lot of the Monument Inn Restaurant, you can’t help but imagine all the natural and man-made disasters that have plagued this small area of Texas – wars, hurricanes, fires, floods. And through it all, the legends, the ferries, the monument, the memories, the battlefields, the battleship and the Monument Inn have all endured.

You can view a photo gallery of my visit to the Monument Inn.