Sartin’s gets a shout-out from the Dirty South

Errr, I mean the “New South” as defined by the provocatively titled Garden & Gun Magazine.

When I got a tip about an interesting new Southern lifestyle magazine called Garden & Gun, I immediately envisioned big…haired women in American-flag bikinis posing with assault rifles. But to my surprise it was a nicely-designed website with professional features and copy. Promising.

Of specific interest was a feature called 100 Southern Foods You Absolutely, Positively Must Try Before You Die. It’s a groovy interactive map of the South spotlighting foodie joints. And not just the usual, expected highlights of Southern cuisine, but some real unexpected finds.

Of personal interest to me was one of 3 entries for seafood in Texas: Sartin’s in Nederland, home of the all-you-can-eat Barbecue Crab platter. For anyone who grew up in deep Southeast Texas, the name “Sartin’s” has a special meaning. Starting with its slogan “Giving people crabs since 1971,” the often colorful and always delicious history of Sartin’s belies a dedication to a unique culinary art that originated in the tiny town of Sabine Pass, Texas.

A “Barbecue Crab” is, of course, a misnomer. There is no smoke or grilling involved. Back in the 1940s a cook at Granger’s Restaurant in Sabine Pass had the inspired idea to take a cleaned blue crab — plentiful along the Gulf Coast — smother it in a dry rub traditionally made up of Sexton’s Alamo Zestful Seasoning, and then deep fry it to crispy perfection. 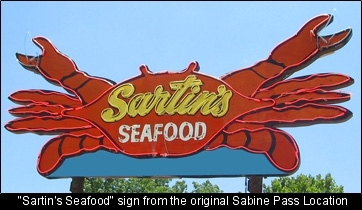 Many years later, in the 1970s, Sartin’s Seafood restaurant in Sabine Pass took up the cause and perfected the BBQ Crab with their own secret rub. From there, Sartin’s restaurants opened throughout Southeast Texas, including Beaumont where I grew up and came to love the heapin’ helpin’ of all-you-can-eat BBQ crab.

In the ensuing years, hurricanes and family squabbles have divided Sartin’s into the Nederland Sartin’s and then a number of Sartin’s around Beaumont and
Houston. Not unexpectedly, litigation ensued over the Sartin’s trademark (if any city has more lawyers than Houston, it’s Beaumont). 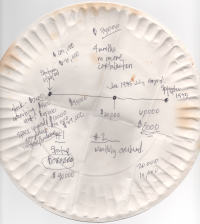 The original Sartin’s Restaurant in Beaumont on the Eastex freeway was toppled by Hurricane Rita in 2005. Many memories of my misspent youth were toppled with it. I remember the long picnic tables decorated only with rolls of paper towels, paper plates, and plastic bibs, with the young waitresses in t-shirts and shorts carrying towering trays of BBQ crabs to your table. Of particular note: this is where the plan for my first business was hatched on November 26th, 1994. Sketched up on the back of a paper plate (rather than on the back of a napkin — it’s a SE Texas thing), the presentation didn’t exactly impress any VC’s so we ended up bootstrapping it. That business is still around today.

If only the original Sartin’s could have lasted as long.