“I remember eating there when I was a kid!” This is the initial response when I invite my thirtysomething friends to dinner at Felix Mexican Restaurant. But this is usually followed by, “Let’s go somewhere else.”

Indeed, dining at Felix can be a lonely, as well as satisfying, affair. Living nearby, I pass Felix every day and never see more than 2 or 3 tables occupied. Suffice it to say that no reservations are necessary. Obviously, the history of Felix is long and colorful and beyond the scope of this review. But in order to set the stage I’ll briefly give my own personal experience with Felix Mexican restaurant.

Growing up in Beaumont, Texas, there were two choices for Mexican food: Felix (owned by the same family as the Felix in Houston) and Monterrey House. Monterrey House was closer to the “nicer” neighborhoods of Beaumont, so that is where we dined more often. Felix was on Calder Ave. on the way into downtown, you couldn’t miss it. By the time I got a driver’s license, I would occasionally trek to Felix for what my young palate deemed the superior Mexican food in Beaumont. And like the Felix in Houston in 2007, dining at the Felix in Beaumont circa 1985 was a lonely affair–I was usually the only one in the place. Around this time the Casa Ole Mexican restaurant chain got its start in Beaumont and that’s where all the cool kids hung out. Stubbornly, I continued patronizing Felix, sometimes taking dates there. Being 17 years old, on a first date, in an empty Mexican restaurant, surrounded by puzzled Mexican waiters, and eating food that would be considered boring compared to Casa Ole’s atomic tex-mex, well, let’s just say I didn’t get alot of second dates. After moving away from Beaumont to go to college, I never went back to a Felix restaurant until I moved to Houston. And it was at the remaining Felix restaurant near Montrose and Westheimer where I found myself dining on a Tuesday night not long ago. 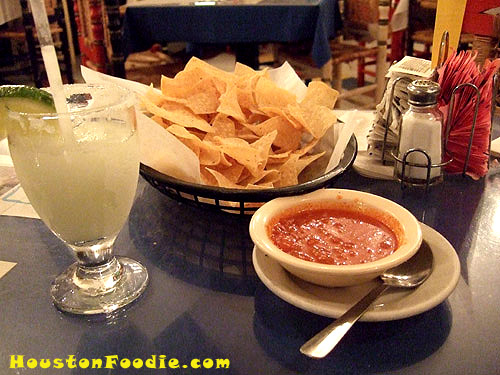 The Holy Trinity of Mexican Food

The margarita was strong and tasty, nothing special, but enjoyable and satisfying. The chips were hot and fresh. The salsa was clearly old-school. Very tomato-ey, but surprisingly sweet with a spicey kick. The kick must have come from jalapenos as I could not detect any recognizable cilantro or garlic. Compared to contemporary tex-mex salsa, the sweetness and wateriness of this salsa may be off-putting for some diners. For me it was a welcome change.

Felix is known for its chili con queso, but tonite I went straight for the combination plate, Felix Mexican Dinner #1. This consisted of a beef taco, rice, tostada “veracruzana”, tamale, and cheese enchilada, with the final two smothered in Felix’s signature chili gravy. And you know this is old-school tex-mex when you can get an optional side of spaghetti and chili gravy. Tempting, but maybe next time. 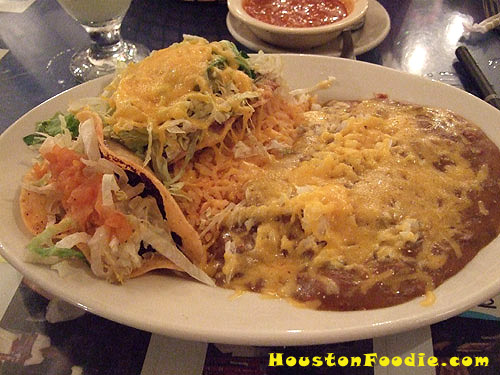 The tostada, rice, tamale, enchilada and chili gravy were all quite bland but well-prepared and enjoyable; these are recipes suited to a palate from the 1950s when the experience of gastronomical fireworks was not the norm it is today. The one standout feature of the enchilada was the presence of fresh, crisp and very sweet chunks of onion sprinkled over the top of the cheesy enchiladas. You don’t see this alot in contemporary tex-mex.

The standout dish was the beef taco. The taco shell was made the old-school way–fresh corn tortilla fried and shaped until golden brown. This results in a perfect edible container for the ground beef, lettuce and tomatoes. Unlike store-bought taco shells which are so crispy they often break up during eating, tacos shells prepared this way retain a chewy/crispy texture that holds its form after biting into it. The beef was coarsely ground and spicey, and the lettuce fresh. The chopped tomatoes had a peculiar orange tint to them, but by all measures were fresh and flavorful.

Having been denied flan during a previous visit to a different tex-mex restaurant, I ordered it here for dessert (flan and sopapillas were the only desserts offered). What arrived was, again, bland yet edible. The caramel syrup was watery but sufficiently sweet. The custard had a good, silky texture, but lacked any flavor of cream or vanilla that is to be expected from good flan. Strangely, the plate was warm but the flan was (appropriately) cold.

Generally, this is the same food I remember from growing up. Of all the dishes, the beef tacos have stood the test of time better than anything else. On future visits to Felix (and there will be many as long as it is open) I will order the beef taco plate and an obligatory side of chili con queso.

Service (7/10)
The service was excellent. There were literally more staff in the restaurant than customers.

Atmosphere (6/10)
From the half-broken neon signs and faded Houston Press banner claiming “best retro-mex 2004” on the outside, to an interior filled with rickety hand-painted chairs and walls covered with pictures of the Felix Tijerina family, the atmosphere at the Felix Mexican Restaurant is, like the food, a fascinating time-warp. The sheet of glass covering my table protected pictures and nametags from a recent reunion of Lamar High School c/o 1954.

Value (4/10)
Although the food may be from the 1950s, the prices are not. Most entrees are in the $10 range, comparable to the higher end of prices at contemporary tex-mex restaurants like La Mexicana. But Felix has a loyal and captive audience who is willing to pay these prices to get the retro-mex food that they crave.

The Bottom Line (5/10)
Felix unapologetically gives its loyal customers exactly what they want: time-warp tex-mex food from the 1950s, attentively prepared, forever unchanging. If a contemporary Mexican restaurant were serving this food, it would not be a Foodie Favorite. But this is Felix, and respect must be paid. Being a Foodie is not just about gastronomical adventure. It is also about tradition and history. The value of Felix–aside from providing enjoyable if somewhat bland retro tex-mex food–is that it remains a still-living culinary baseline from which to evaluate all other tex-mex.

PostScript: By total coincidence, the day after visiting Felix here in Houston, I was reading the Beaumont newspaper website and found this article about the demolition of the old Felix restaurant location in Beaumont. (80KB PDF)

PostScript #2, August 2008: Felix is no more. I went for lunch today and the door was locked and the lights were out. No sign on the door or any other notification of closure. But I, along with a few other bewildered lunch-goers peering through the windows, knew the unspoken truth. We nodded to each other and went our separate ways.

A week-or-so later a sign went up announcing a going-out-of-business sale. I stopped in. Not much to see but a lot of rickety chairs and a stack of old menus. I found a menu with the Houston and Beaumont locations listed and bought it for $10(!). I have made the Felix Restaurant menu available here for posterity. (130KB PDF)